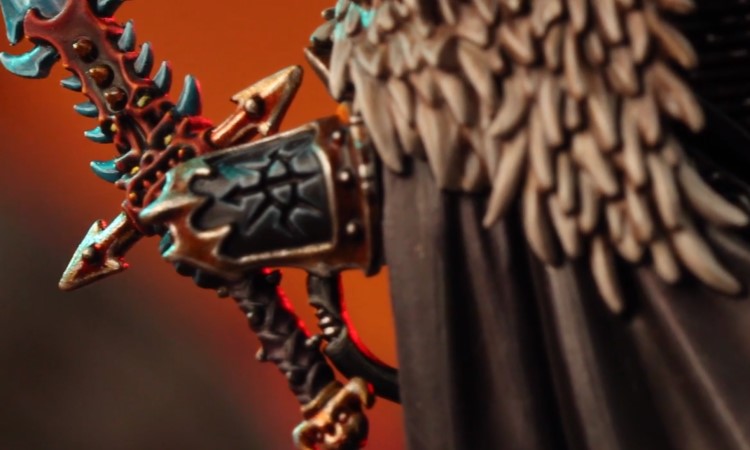 Welcome back servants of Nagash and warriors of Sigmar. Games Workshop have recently hosted a Warhammer event at the Las Vegas Open. Join us as we explore the announcements and previews that are to be released in the year to come. So grab your prepare your brushes, grab those paints, and lets see what is in store for us!

To start things off, lets talk about the Age of Sigmar universe. The first announcement reveals the new Battletomes for every Grand Alliance. Whether you are a Stormcast player, a collector of Chaos, horde bringer of Orks, or bringer of death, there will be a tome for you. Naturally, each Grand Alliance; Order, Chaos, Death, and Destruction, will have a Battletome which will release later this year. These will contain updates to classic armies, some new armies, as well as details on alliance abilities all in one place.

Next up is some massive love for the Blades of Khorne faction. This takes the form in a new Battletome, a redesigned Skulltaker hero, and Endless Spells! With the recent release of Wrath and Rapture Battlebox, the new Battletome will all the refined resources to organise your collection and armies. Collect the skulls of your enemies with the epic redesign of Skulltaker and them beat them down some more with the new Endless Spells. Blood will definitely spill!

The narrative of Age of Sigmar is always deeps, rich, and engaging. This provides awesome products to indulge in and play with. Soul Wars last year was a massive hit and this year hopes to follow suit with Forbidden Power, the next chapter in the story. Get ready to face, as quoted from the official Games Workshop article, “something ancient and terrible”. We shall be eagerly awaiting reveals in the coming weeks for the next chapter in the epic story and new Battleboxes.

As a little teaser, a new way to play was talked about briefly called Warcry. It is described to be a new game that “draws on some of the best bits of Warhammer Underworlds and Warhammer 40,000: Kill Team”. As both of those titles are small scale skirmish games, this heavy leans into a possible small scale Age of Sigmar warband title. With just a handful of models, small maps, and clever cunning, it would be a great release as 40k already has Kill Team.

Lastly, on the topic of warbands, there is a new group entering the fray. For Warhammer Underworlds: Nightvault, the Ylthari’s Guardians represent toe ever lasting beauty of the Sylvaneth. Combining many elements of the factions, the Guardians combine hard hitters, magic, and range into a powerful team. It will be a great edition to the Nightvault collection!

Onto the 40k universe now and oh boy does it hit the ground running! Warhammer 40,000: Shadowspear is the next Battlebox that will deep strike into stores later this year. This box will contain the Primaris Vanguard Space Marines who will have to defend Vigilus from the forces of Chaos. A much needed and wanted revamp of classic Chaos Marines are here in the form of Heretic Astartes. Every model is a new sculpt and all look insane, including the new Obliterators and Venomcrawler!

There are also some news for you Sisters of Battle fans out there. Due to a survey from 2017, this faction will be granted a Codex. The Codex: Adepta Sororitas is coming with the last playtest ongoing. There will be more news on this in the coming weeks, according to GW including more models to add to your collection.

Lastly, there was a big tease in the form of a model preview for the 40k universe. The reveal tipped the arrival of a new Primaris Lieutenant. However, as the GW team like to have fun with their craft it, provides a mini trailer of Primaris decimated with a towering Chaos presence looming over them. With the phrase, “A Master of War”, a huge power claw, and locks of red hair, it is a indication that the Warmaster of Chaos, Abaddon the Despoiler is on his way. And no doubt he will be leading the forces in co-ordination with the Shadowspear release.

And that is you lot. Some big announcements at the Las Vegas Open from the legendary Games Workshop teams. You can find the original article on their official website. What are you looking forward to the most? Let us know in the comments below. It has to be the Khorne Battletome on this end! Stay tuned for more news, reviews, and guides. Until next time, smile and game!