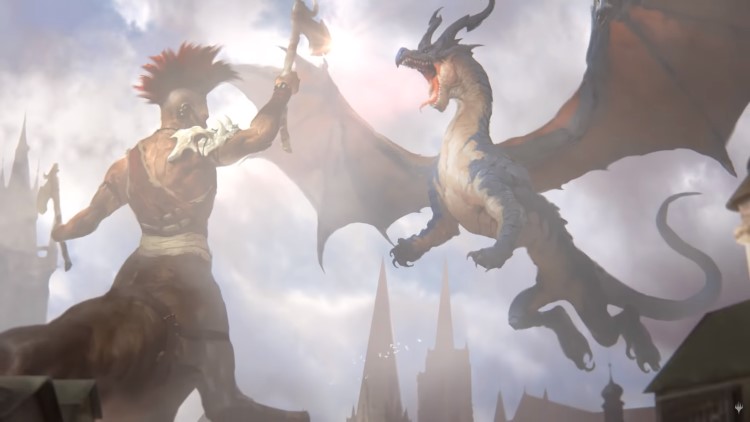 Welcome back fellow planeswalkers. With the adventures into the world of Ravnica in full swing, the wonderful team of Wizards of the Coast have announced the next leg of the journey. So pick your Guild and prepare your deck as we talk about the upcoming set; Ravnica Allegiance!

For those who haven’t had the opportunity to explore the world spanning city of Ravnica, we shall give you a brief run down on the events thus far leading into the new set. This plane is separated into 10 ruling guilds held together by a forever diminishing treaty called the Guild Pact. Each guild has it’s own culture, laws, hierarchy, and goals. With that comes oodles of flavour, lore, and gameplay considerations for the players to choose from. Each guild appeals to different players and creates wonderful possibilities for decks and match ups. So, what has developed for the new set?

With the Guild Pact hanging by a thread as tensions rise between the governing bodies, territories are threatened and forces muster. In an upcoming war of the guilds, you are called to protect your ideals, your homes, and your allegiance. In this set, all our war is on the horizon and you will be fighting to secure you standing in this plane. Do you have what it takes to weather storm? Or will you break among the rising tide?

The guilds are featured in the trailer above but, here is a brief rundown of each. The Azorius Senate are the lawmakers and law enforcers of Ravnica. With a blend of White and Blue mana, they control the board and buff their own to secure victory. The opposite in terms of values and operations, Rakdos are lead by cruel, blood thirsty demons. These members thrive for killing and twisted pleasures on the back of Red and Black mana. Destruction is the name of the game.

Others that incorporate nature are the Selesnya, Goldari, and Simic. The Selesnya are spiritual congregate that promote selfless values that incorporate the White mana. Goldari, however, use the armies of dead to progress their goals, use Black mana, as well as worship death. As for the Simic, they combine the laws of nature and science to make sure they survive no matter the cost. Utilising Blue mana to influence the world, they modify for effect.

The destructive and dominating forces of Red mana embeds itself into the guilds of Boros, Izzet, and Gruul. The Boros is a military body that believes in justice and righteousness which pairs well with their use of White mana. Izzet manifest magic and technology with a combination of Red and Blue mana. As for Gruul, are primal hordes that incorporate overwhelming tactics of Green mana.

The last of the guilds are the House of Dimir and the Orzhov Council. Dealing with their allies and enemies from the shadows, the Dimir harness Blue and Black mana to manipulate affairs and eliminate if necessary. Whether it be dagger, ethereal claw, or maddening whispers. As for Orzhov, coin driven hierarchy seals the fate of many through deals, service, and slaves to serve a spirit council.

The release date for Magic: The Gathering – Ravnica Allegiance is January 25th 2019 with the pre-release event on January 19th-20th 2019. Perfect way to start the new year! Stay tuned as more details are released in the coming weeks. Also, keep an eye on more news, previews, reviews, and guides. Until next time, smile and game!