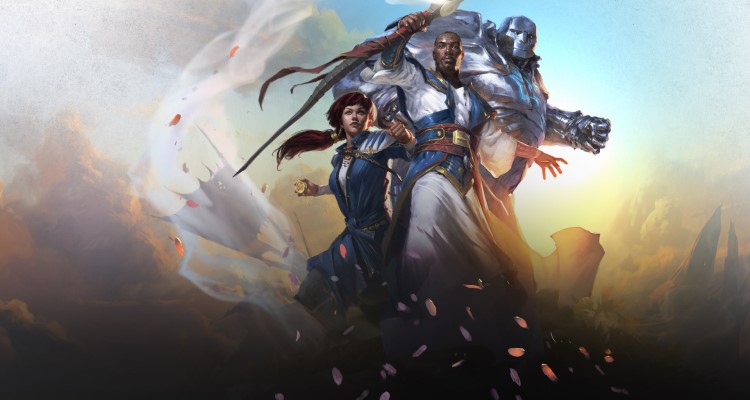 Welcome back wonderful gamers. With the recent release of Guilds of Ravnica, Wizards of the Coast aim to bring in more new players. Join us as we delve into one of the most popular trading card games of all time, Magic: The Gathering and the reasons why it is the perfect time to pick it up.

What is Magic: The Gathering?

You are a Planeswalker. A spark inside you has ignited from which allows you to walk the various planes of existence. By utilising your library or deck of powerful spells, you must summon monsters, manipulate the elements, and tap into the energies of the various worlds you visit to defeat any who would threaten you. Your fate is your own and you have been given the opportunity to witness reality unravel before you.

Created by Richard Garfield, Magic: The Gather was released by Wizards of the Coast in 1993. It is a trading card game that pits two or more players against each other with the goal of reducing the opponents life points down to zero. You do this by summoning powerful monsters to protect and attack for you; wash away resistance with lightning, fire, mind control and other awesome magic; support your minions and allies with soothing enchantments; all whilst tapping into the various environments for energy.

Why should I play?

With all the card games and other activities out there at the moment, the question is “Why this game?”. Wizards have not long released their 2019 Core Set and, as of 5th October 2018, released Guilds of Ravnica.  They aim to bring in new players to indulge in the tactics card game. Already touching the lives of millions of players, the game is easy to acquire and simple to learn. There is a good reason why it is played from all four corners of the globe. But, what are the other reasons that should convince you?

The team behind the popular card game are immensely talented. More specifically, the artists that craft and mold the worlds and the characters that inhabit them tantalise our senses with beautiful pieces of artwork. These pieces can be a magnanimous dragon, a glorious charge and battle scenes, casting of powerful magic, or even the the world from which your tap the energies for your spells.

When working on a new set, the design team construct the cards from which you will play against your opponents. But, also, they build the world from which the story and gameplay are based in. Entire worlds designed for your gaming pleasure and admiration. And, if you are lucky, you may open a pack that contains a full art card that isn’t constrained by the borders from which it’s normally contain. Each and every one of Magic’s card has a story, has feeling, and is absolutely gorgeous!

What game would be complete without fun and engaging gameplay? Magic: The Gathering, throughout its life, was designed and released to be progression of power, tactics, and enjoyment through the form of collectible playing cards. With each release of a new set comes new tools to uses, more minions to consider adding to your roster, and spells to cast to hinder your opponent. In some cases, entire archetypes arise to promote flavour.

The cards you would be playing with are all classed as spells within your library of tools. You use these to reduce you opponents life total to zero whilst protecting your own. Some summon soldiers, creatures of abandon, and animals of the wild. Others can be the mountains and/or oceans from which you tap to cast destructive magic or to bolster your forces. Combining these cards in tactics and strategies is where the fun starts.

Each deck can be vastly different. By utilising the five difference colours of mana, White, Blue, Red, Black, and Green, to cast your way to victory, you can create weird and wonderful strategies. From the all in methods of Red, the controlling fashion of Blue, to the mammoth swings of Green, there is a deck for everyone. You can even combine multiple colours to splice strategies and make them your own.

Magic: The Gathering is now decades old. Being around for so long and being so successful comes with an amazing player base and community. Whether you play for fun with a group of your friends, participate at local tournaments, or even on the grand scale by travelling the world to compete in the world championships, you will meet and play with people who love the game. The passion is shared and enjoyed across the board.

One of the appealing aspects of the game is your can play collect at your own pace. You can start by purchasing one of the Intro Decks at your local store. With a group of your friends you can play week after week adding to your collection by buying a pack or two of the latest set. Or, if you want to compete for prizes you can sign up for local tournaments or even championships. With such good coverage of the game across the world, it also comes with the wonderful prospects of trading cards. Do you have a card you don’t need but someone else does? You can trade it for something you might need. You can meet lovely people as a result building the community and your experience even more.

Not only is there the wonderful community that play, collect, and compete together but, there is also the community team from Wizards themselves. They are the champions of The Gathering, bastions of a solid community, and promoters of the grounds from which all players from across the globe can enjoy the game with each other. With such delightful characters at the helm, it’s no wonder that the Magic nation is one of unity, support, and most importantly, fun.

So, we have awesome artwork, great gameplay, and a cracking community. That has to be it right? Definitely not. Coupling with the lavish artwork, the games designers are immensely talented in providing incredible lore for us to indulge. With each set comes with an indepth and colourful story represented in various ways. Whether it be written material describing the multitude of events within the current story, the artwork capturing a moment in the lore within the cards you play with. Or, even the trailers leading up to the release of a set. It is all there for you to enjoy.

When playing the game you will be travelling to worlds of wonder time and time again. Or, in some cases, travelling to the same world through different time periods seeing the changes in its future. The game designers craft these entire worlds we play with. From the royal lines that rule, the history that builds a society, to the personalities of the characters you like to destroy your opponent with. Following the flavour on each card and pursuing the media on the official website is exciting. The universe is constantly evolving and is alive.

Lastly, but certainly not least in the grand scheme of things, is the endless fun you can gain from playing the game. As mentioned in previous points, the game changes, releases new sets, and can be enjoyed with other people who posses unique decks.There are countless situations with every game, every meet up, every tournament. Even down to the pack you bought from your local game shop. Each time you visit the game it will be fresh and exciting.

In terms of playing the game more specifically, each colour of mana has its own feel, strategies, and lore encompassing its existence. Combining colours blends these playing methods, general feel, and experiences. Want big things to smash your opponent? Go Green. But, you like the sound of controlling the board too. Add a splash of Blue in there too to prevent the opponent from blocking your attackers. But, look out, the opponent is playing a rush strategy Red deck. The game is on as the blood starts pumping! Each game, each deck, and each card played is one to be remembered and enjoyed. Grasp it!

And that’s all lovely gamers, 5 reasons why you should get into Magic: The Gathering. Why not pop into you local game shop with a few of your friends and start your journey today? There is plenty to enjoy from the game. Whether you are a collector, appreciator of art and lore, or love busting out strategies with your friends and rivals, there is something for your. You can find more details on the official website. For more news, reviews, and previews, stay tuned. Until next time, smile and game!