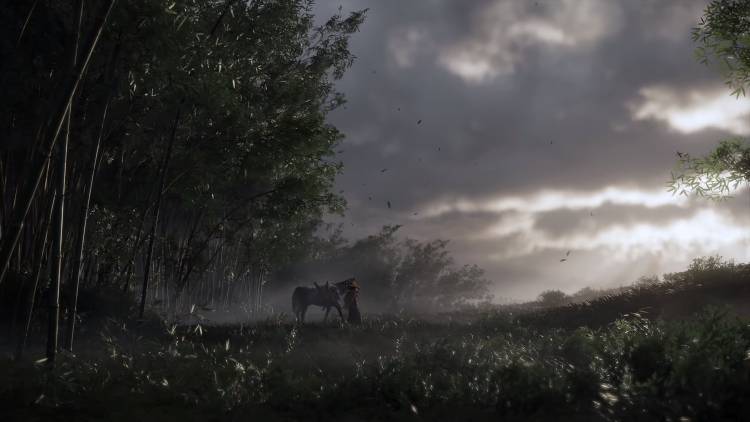 Welcome back to more information on the reveals and upcoming releases from E3 2018. This time we have details on Sony’s Ghost of Tsushima. So why don’t you join us as with delve into the upcoming action-adventure game developed by Sucker Punch.

First announced in October 2017 by Sony Interactive Entertainment, Ghost of Tsushima was revealed to be Suck Punch’s new title in production. Now with E3 2018 out of the way, more details have come to light on what we can expect from this open world action-adventure. It is set in 1274 on the Island of Tsushima where the Mongol forces are invading. You take the role of Jin Sakai in defending his homeland and fight for the freedom of Japan by adopting the Way of the Ghost.

In the gameplay debut above, the gameplay cinematic quality is absolutely stunning. From the wind physics viciously lashing the light forests, the sloppy mud coating Jin and his horse, to the authentic sounds of the birds and music. It has been stated that a team was sent to Japan to record different sounds for the title. The quality and direction of such decisions are evident and utilised extremely well. The feel is established from the first moment and keeps hold of you all the throughout the footage.

During the reveal, several combat scenes were played out. The use of counters, clever maneuvering, stealth, and use of tools such as the grappling hook. There are bound to be a plethora of features teased and talked about in the weeks and months to come. But, as it stands, Ghost of Tsushima looks, sounds, and feels beautiful. The combat scene alone with the usage of sun set lighting, falling leaves, and gripping audio is enough to lay down you money for the experience. This is definitely a game to keep an eye out for.

And that is it for now. No release date as of yet for Ghost of Tsushima. However, keep checking back for more news, reviews, and previews as they come up. Also, you can find more E3 2018 articles here. Until next time, smile and game.