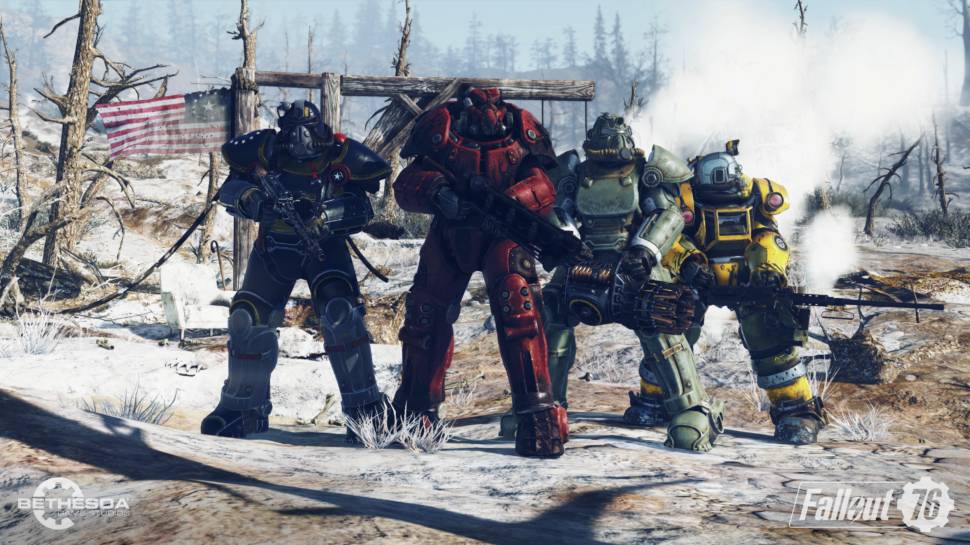 We heard rumours that Fallout 76 could be an online survival RPG and those suspicions were answered at Bethesda’s E3 2018 conference.

All the fan speculation and press information was pretty spot on when it came to the big reveal. Fallout 76 is the earliest in the timeline so far, making it a much brighter world to explore and the emphasis on rebuilding civilisation soon after the bombs went off.

When is Fallout 76 Set

It’s set just 20 years after which is much earlier than Fallout 4 that was timed at around 200 years after the nukes exploded. This makes the story much different, civilisation is still young and everything has not had as much time to decay or mutate from the aftermath of radiation.

This then makes a lot of sense that the idea of Fallout 76 is aimed at rebuilding society and civilisation as the tallest building might not “reach the heavens” anymore as quoted in the trailer.

Fallout 76 is officially an online-only RPG

As we all suspected, it is indeed going to be an online-only game based around Vault 76 which has been mentioned within the previous titles as one of the earliest vaults that opened their doors after the nuclear war.

As it is framed on rebuilding you won’t be able to do it alone and ToddHoward did mention that the other people you meet out in the world will be real people, not NPCs.

He did reiterate that it is not going to be a massively online multiplayer though. “Not hundreds or thousands just dozens of players as it is the apocalypse after all”. This does tie in with the early rumours that they tried to make a ‘multiplayer Fallout 4’ but evolved into something more and become the Fallout 76 we now know of.

How big if Fallout 76 compared to Fallout 4?

During the reveal, Todd Howard said “It’s the largest Fallout game ever made” that will be four times larger than Fallout 4 set in the hills of West Virginia, USA and will be made up for six distinct regions.

Each of the regions will have a completely different feel to them, where players can explore different culture changes, locations and local legends taken from the real world.

You’ll be able to build anywhere on the map which is different to Fallout 4 where settlements were predefined locations. Players will be able to join resources to create a base as a “safe” space complete with defences.

The cool thing about the base-building is you are not tied down to a single location as you can pack up and move your base anywhere that you want. It’s unsure if the bases will be persistent in the world when players are not logged in or how it works exactly moving the bases around.

You can own nuclear missiles

After the nuclear war, there’s going to most likely be some left over and the players who are out in the world rebuilding are able to use these against their enemies or the local wildlife.

Players can explore the wasteland and fine missile silos which is you collect all the codes can be used to fire them at any point on the map. If you don’t have all the codes you can team up with other players to complete the sequence and launch the nukes at a mutual target or turn on them…your choice. This does also mean that your bases can be destroyed by blasts or even by the monsters that have littered the slightly irradiated landscape.

V.A.T.S could be no more

The Vault-Tech Assisted Targeting System that has been featured in all of the previous modern games in terms of actual gameplay mechanics might not be a thing in Fallout 76.

In previous games, the VATS would help players hit other monsters and NPCs if they were unable to do so completely unaided by showing different body parts and the percentage chance of the ammunition hitting the targeted area.

As it is now an online multiplayer game it is unsure how the mechanic would work without pausing the entire world around you or slowing it down around other players. The demo at E3 did not show VATS in use but there was still an AP bar which does indicate there is a need for something other than just stamina.

Mods, mods and more mods might not be a thing

All Bethesda games have been known for their modding prowess and if you did not like something in the game you could just jump in and tweak things or create more weapons, quests and buildings.

In previous games, entire new expansions have been made on top of the existing game and entire systems have been rebuilt usually for the better by the modding community.

This is unlikely in Fallout 76 as the world is shared between players and could lead to unfair advantages for those who can mod the game. It could mean that the creation club, however, becomes more a thing as it is actively managed by Bethesda themselves.

Death is not permanent

As a survival game, players were wondering how death would work in Fallout 76 and Todd Howard was keen to put this clearly out at the conference. He said that the game will not be “hardcore survival” but more “softcore survival” meaning that you can play, take risks and ultimately die without losing your character or progress.

What was interesting from this statement came on the progress of your character and world as you play with friends. Your progression moves into their world when you decide to play with them making sharing the experiences a more memorable one.

How this works in practice is still unknown but progression might not always be in one direction as nukes and monsters can take out your bases, so there will be times you need to start again and rebuild.

Will there be a Fallout 76 Beta?

The answer to this question is 100% yes! Vault-Tech official calls it the “Break it Early Test Application” and Todd Howard even jokes that he’s read online their games have had a few bugs.

Bethesda games do have a reputation for not exactly working how they should, being able to send horses flying into the air on Skyrim or falling through to fall of a Vault in Fallout. The company has dedicated to making sure they can take away a lot of the annoying bugs that could be game-breaking but many gamers know that some of the crazy and downright funny bugs are what make these games so endearing and part of the charm.

At this moment, the beta has not been announced but considering the release date is not too far off it should be fairly soon.

Fallout 76 will have a collectors edition

Each Fallout game has had some pretty cool collectors editions but the Fallout 4 one took the lead with the Pip-Boy you could actually wear. In that edition, it was possible to put your phone into the wearable and load up an app to connect your game.

In 76, they’ve gone one step further and made the Power Armour Edition which comes with a fully working T-51 Power Armour Helmet that has a working headlamp and voice changer built in. The collector’s edition also comes with a glow in the dark map of the world, some mini figures to place on the map and the game.

When Bethesda first showed off Fallout 4, they promised gamers would not have to wait long to play the game and it was then announced to be released the same year in November.

Fans will not have to wait long again as Fallout 76 is going to be released this year November 14th, 2018. That means that the beta testing will need to happen soon if they want to be ready, so gamers will be able to experience the world much sooner than probably expected.

In the meantime, gamers can go back to Fallout 4 to try and dull their appetite until the day comes that a beta date has been announced.