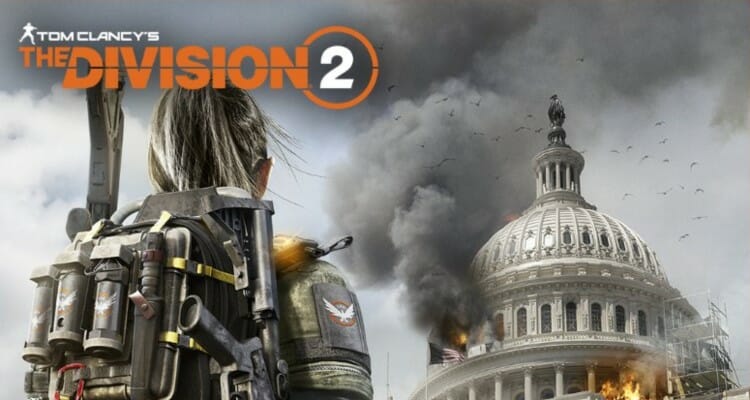 Welcome avid gamers. With E3 2018 in full swing, the announcements are coming thick and fast. Day one is out of the way and we have some more information and gameplay from Ubisoft in the form of The Division 2. So stay a while as we keep you up to date.

It was no secret that The Division 2 was going to be at E3 as Ubisoft made the reveal recently. The game follows the feel and story of the first title but, this time set in Washington D.C. As seen in the gameplay reveal below, it follows a group of players as they experience the collapse of society and investigate the surrounding area.

In this walkthrough, the squad make their way through a botanical garden with exhibits long since abandoned. This eventually leads them to a survivor settlement and the objective to investigate a crash site under the control of a group called the True Sons. Upon arriving the party engage in a decent fire fight which showcases some new toys and features for the agents to play with. The various scenery and visuals look very pleasing at this stage of development. This is encouraging with varying levels of polish assumed to be remaining.

New Features and Firepower in The Division 2

One of the main features that stood out in the reveal was the map style. This style was supposed to be in the release of the original game but didn’t make it. This version has been updated and is more streamlined and looks pretty nice. Hopefully, this time around it will make it into the full release.

Other new treats the Ubisoft guys have for us are new equipment. In The Division, slightly futuristic technology is embedded into the core of the setting. This is no different for the sequel. Aside from the returning favourites like the seeker mine, new equipment revealed include the following:

Another interesting highlight within the footage is a new type of enemy. This enemy, which can be seen throughout the fire fight and eventually taken down, is referred to as The Tank by one of the party. They don is heavy armour and are armed with heavy weapons. However, the individual body armour pieces can be blown off allowing easier access to vital points of the body.

At the end of the gameplay reveal, after party decide to storm a heavily defended position in the capital, the release date for The Division 2 was detailed. It is stated for a March 15th 2019 release. Its a fair amount of time for Ubisoft to apply oodles of polish and provide solid follow up from the previous title, which is currently still being supported. As the weeks go on, the team are more than likely going to reveal even more juicy details and gameplay. Another note, you can now sign up for the Beta that will be unleashed at a later date. But, for now, keep checking back for all your news and reviews especially with E3 at its peak. You can find more E3 2018 articles here. Until next time, smile and game.