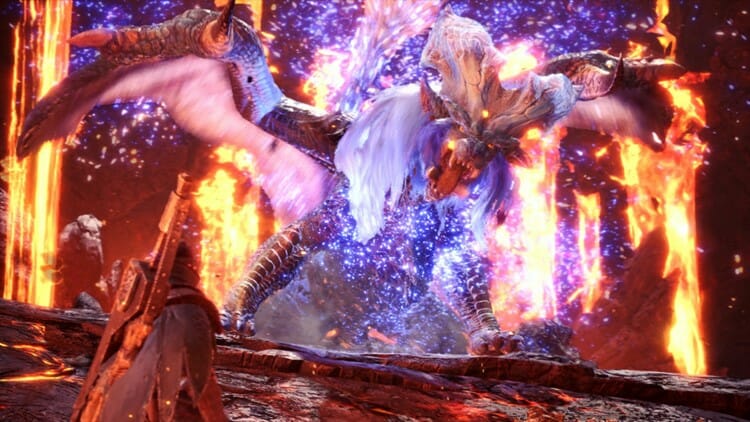 Welcome back fellow hunters. The next free update to Monster Hunter World is now live, version 4.0. Prepare yourself to face a new mighty Elder Dragon, craft new gear, and gain new specialised tools. So join us as we delve into latest update.

With the Elder’s Crossing being ravaged by the gathering of the Elder Dragons, the fierce female equivalent of Teostra joins the fray. Littering the field of battle with blue, smoldering dust, it seeks its mate and actively teams up against other monsters. Very dangerous on its own however, if it joins up with Teostra it will provide even more of a challenge as the blue dust empowers and grants greater strength to its allies. So if you think you are ready, don your armour, have a firm grip on your weapon, and get hunting!

If you manage to take down the mighty queen of fire, then be sure to head on over to the smithy to craft new and exciting gear. There are both Alpha and Beta versions of the Lunastra set as well as new Palico Gear and Weapons. It should open up some new play styles and considerations for the weeks ahead. Which might help against future challengers that will be detailed below.

Alongside the addition of facing a terrifying new Elder Dragon, there are some other features available to the game. These include:

Lastly, coming in June 8th and 22nd, the Monster Hunter World team will be unleashing an even bigger challenge upon us all. This challenge is the Arch-Tempered Monsters. First, with the Kirin from June 8th-21st, and Vaal Hazak from June 22nd-July 5th, these monstrosities are even tougher than before. But, that’s not all. If you best them you will gain access to the new Gamma Armour sets which are tipped to be truly awesome.

In the future, it has been announced that other Arch-Tempered monsters will be released. It can only be assumed that other Gamma sets will made available too. Not only that but, more events, such as the Kulve Taroth Siege, will be making its way to the game that feature new and wonderful looking Layered Armour sets to acquire.

But that is all for now everyone. Keep checking back for more news on upcoming Monster Hunter World news. The official release notes are on the official website. Until next time, smile and game.