Welcome back travelers to more of The Witchwood card reveals. Stay a while as we share more of our thoughts and feelings. If you haven’t already, please have a look at our previous article if you have not up to date thus far. 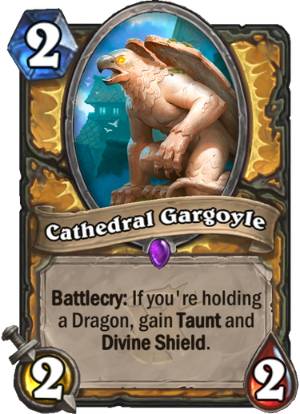 Let’s start off with a light in the darkness, the Paladin. They gain Cathedral Gargoyle, a 2 cost 2/2 that gains Divine Shield and Taunt if you are holding a dragon. Reminiscent of Shielded Minibot from Goblins and Gnomes, this card, when triggered, can be difficult for the opponent to deal with. Evidence of this can be seen in Righteous Protector, a Paladin 1 cost 1/1 with Divine Shield and Taunt. However, with Netherspite Historian, Book Wrym, and The Curator leaving standard, at the moment it seems quite difficult to construct a consistent Dragon Paladin deck. In wild, however, this card can see some play.

Next up, we take the fight to the enemies. Woodcutter’s Axe is a 2 cost 2/2 Weapon with a Deathrattle that gives a Rush minion of yours +2/+1. With the nerf of Fiery War Axe, this weapon is most likely going to be a suitable replacement for a while at the least, even without the Deathrattle. Early control of the board is something Warrior has been trying to claw onto since the nerf. Also, with the amount of decent Rush minions revealed thus far, the buff this card provides allows you to chop down resistance faster and more efficiently.

Deadly Arsenal, however, is more of a late control card. For 6 mana this spell reveals a weapon from your deck and deals its attack to all minions. The perfect weapon this combos with is Gorehowl for a massive 7 damage clear. It is fairly easy to see a Control Warrior using this card, maybe even a Quest Warrior variant.

For Druid we have a sinister harpy in the sky. Duskfallen Avian is a 5 mana 3/7 Legendary that allows for the first card either player plays each turn to cost (0). Now, like the Priest Legendary from last set Temporus, the opponent will gain benefit from this effect before you on most cases. The question is, would you like to allow your opponent a free Ultimate Infestation, Free From Amber, or Archmage Antonidas? Probably not. However, cards such as Alarm-O-Bot could allow you to reap the benefits first. Seems a bit risky but could pay off.

The Hunter Class gains two cards in this reveal. First up Wingblast, a 4 cost spell that deals 4 damage to a minion. If a minion died this turn then it costs (1). This card can be comparable to Flanking Strike and Kill Command when considering minions. They can all remove minions just with different considerations. In Mid-Hunter this would fit quite well. There are many opportunities when it would cost (1) which would allow for great tempo plays.

Quickly following is a new Secret called Rat Trap. When you opponent plays 3 cards in a turn this secret summons a 6/6 Rat. At first glance, a 2 mana 6/6 is very good value. However, this will entirely depend on the what decks are in the meta. Against aggressive decks, combined with Explosive Trap, can provide some stability to the board. But, against control decks it be pretty hard to trigger. One consideration is to use Hoarding Dragon to give the opponent Coins to use. This would make some interesting tempo plays.

Next we have a spell card for Priest. Holy Water is a 5 cost value card that deals 4 damage to a minion. If the minion dies then you add a copy of it to your hand. Now if you manage to fell a Deathwing, the value would be very good. However, the application for Holy Water is very sporadic at best. It should make for some interesting plays and swings.

The Rogue gains a new weapon from The Witchwood. Spectral Cutlass costs (4), has Lifesteal, and gains +1 durability whenever you play a card from another class. Plays very well with Kingsbane Rogue variants. Even with just one Deadly Poison, a 5/2 weapon that can potentially become a 5/4 is quite powerful. Whether you will have any room for such a variant is yet to be seen on release.

For Shaman we have a 7 cost elemental called Bogshaper. For 4/8 worth of stats, whenever you cast a spell you draw a minion from your deck. First feelings with this card is that it is a perfect match with Unstable Evolution. Mid to late game plays with this combo can provide insane amounts of value. It might pave the way to a Miracle Shaman build. Only time will tell.

The last reveal for the day is for the Neutral cards, fun for everyone. The Witch’s Cauldron is a 3 mana 0/4 that adds a Shaman spell to your hand whenever a friendly minion dies.It’s not too difficult to craft situations where this card can be fruitful. However, it is not a very good top deck and not all Shaman spells are universally useful. Despite that, it seems very fun to use and will be a fair value card in Arena.

With the reveals coming thick and fast, things will only get more interesting as time goes on. Keep tuned as we follow the secrets from The Witchwood as the release approaches. All revealed cards thus far will be on the official Hearthstone website. And as always, smile and game.