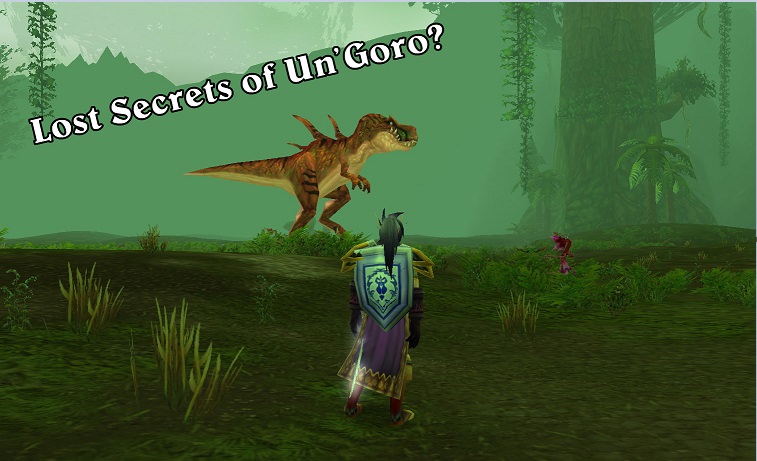 Blizzards famous card game Hearthstone is known for its amusing expansions and due to an online résumé, we may know the the name and some of the cards in the first expansion of 2017. The résumé of Lani Minella, a voice actress who you may remember as the female Krogan Eve from Mass Effect, Pit from Kid Icarus and many many more, was discovered to have the following credit:

This credit has since been removed from Lani’s résumé.

As well as naming the expansion, Hearthstone: Lost Secrets of Un’Goro, there are also credits for a Gollakka Crawler, Pterodactyl, Anklesaur, Hydra and Brontosarus, which we can safely assume are new cards. However, these could also be NPC characters or boss sound effects since Hearthstone expansions are full of them.

For those who may not know, Un’Goro is a location in the World of Warcraft called the Un’Goro Crater. It is located at the southern part of Southern Kalimdor, between Tanaris, Silithus and Uldum. According to official information:

Although the area is almost completely isolated from the rest of the world and sandwiched between three deserts, the region is filled with exotic plant life and even more exotic creatures. Ranging from peaceful earth elementals to raging devilsaurs, the locals are not to be trifled with.

The pylons on the ridges of the crater defy explanation, despite close examination. They could mark where the titans might reappear during their second visit to Azeroth, a visitation supported by holograms in both Uldaman and the front of Uldum. These pylons could also share the same purpose as the pillars in Sholazar Basin, too. The Avatar of Freya, the Lifewarden, mentions that Un’Goro is a similar place to Sholazar, where the titans were performing experiments to create new life forms in Azeroth.

Un’Goro Crater was revealed to have some connection with the titans by Geologist Larksbane during the Ahn’Qiraj solo quests.

Un’Goro is known for many of its popular culture references, in particular, the myriad Nintendo characters and places. Its high ratio of dinosaurs, crystal pylons and mysterious ruins give off a distinct “Land of the Lost” vibe, which chronicled the adventures of the Marshall family in a prehistoric pocket universe.

This could mean the following: we could be getting new cards which reference the other gods in the WoW universe along with some pop culture referencing cards such as the Dandanga Kodo, a reference to a Dodongo from the Legend of Zelda series. Regardless, this seems like it could be a interesting expansion; the decor of the location and the reference to secrets implies a lean towards the Hunter class. In Hearthstone, Hunters have recently fallen upon hard times and is considered to be the worse class in the game currently, so a boost to them here would be appreciated.

Either way, hopefully Blizzard will reveal more information soon and VGU will keep you up to date when they do. Thanks to avid fans on the Hearthstone subbreddit for the find!