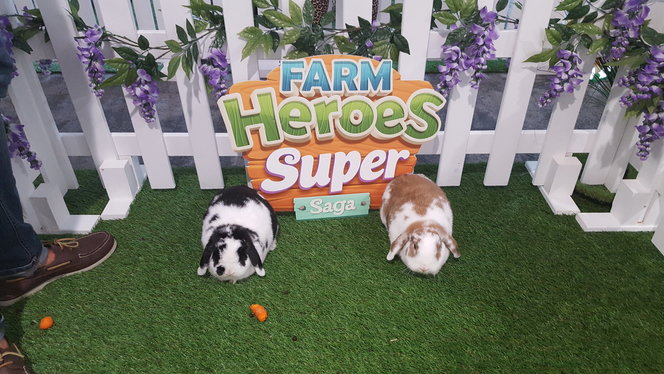 Last week VGU took a trip to London to visit the HQ of KING games. KING are most famous for their mobile and Facebook game Candy Crush, so we were excited to see what they had on the table for us.

The most surprising thing to happen to us at any press event so far is walking into a high rise London office with live rabbits and goats. This is definitely a positive thing and we implore every game development company out there to have rabbits at every press event, in fact it should be an industry standard.

At this point we figured out, as we’re sure you have too, this event was not about Candy Crush, but in fact was about another of KING’s games; Farm Heroes Saga. A new chapter has begun for Farm Heroes Saga and, called Farm Heroes Super Saga.

The gameplay has evolved in exactly the direction you’d expect for a sequel game. The basic gameplay elements are still there but with some changes to help make the game more challenging but still enjoyable.

The addition of “super cropsies” is one of the major changes that Farm Heroes Super Saga brings to the fields. Match 4 regular cropsies in a square formation and they come together to create a much bigger version of those matched. They are worth a lot more points and if they are collected, pass on their point values to neighbouring cropsies.

The art style upgrade brings a 3D edge to Farm Heroes and is a welcome upgrade from its predecessor.

KING realise that trying to compete with someone in a game that they have played for much longer than you, is almost an impossibility. That doesn’t mean that you can’t compete with your friends in Farm Heroes Super Saga, in fact it is encouraged. The Country Show is an event that starts at level 11 and helps players, no matter how new to the game; compete with their friends who could have played the game for over a year before them. The idea is that the more levels you play, the more growth formula you gather to feed to your cropsies. At the end of your event, the bigger the cropsie means the more coins and fame you win. This is a welcomed balance for new players, as having collected points and completing levels before each country show doesn’t affect the current ongoing event, everyone can play with an even chance of winning.

To learn more about what’s new with Farm Heroes Super Saga, we sat down with Lead Producer Ceri Llewellyn for a quick interview:

VGU: With this new version of Farm Heroes, you’re focusing a lot more on the narrative and the characterisation within your game. How important do you think that is for games like Farm Heroes Super Saga?

Ceri: In Farm Heroes, the narrative was very much that Rancid (the Racoon) was coming in and trying to pave over the land, and you were on a journey to stop him from doing that. In this game, we obviously wanted to take that a step further and give the players a more personal connection with the heroes of the game. So you’re helping Biscuit the dog win the country show and Rancid is a more in your face rival.

I think it’s very important to have a narrative within the game. During our testing of the game we heard how the play testers were saying how great it is to get back at Rancid, or how they’re not going to let him win this time. Everyone wants to have a motivation and wants to be a hero, and it’s nice to give them a cohesive story behind what they’re doing in the game.

VGU: There seems to be much more of a focus on social play in this version of Farm Heroes, how do you help new players who want to compete with their friends who are at a much higher level compete with them?

Ceri: That was really the impetus for the country show in Super Saga. I’m also the kind of player who gets into a new game a month after everyone else and I can never catch up or beat their scores. So we wanted to give people something that they could do that was separate from their Saga level completion.

The country show being a timed event, is something that is for everybody. You get given your seeds at the start, the same as everyone else does and then how well you do in the particular level you’re on contributes to you growing your cropsie. Your friend may be a thousand levels ahead of you, but as long as you put the effort into playing the level you’re currently on, you’ll grow a big cropsie and gain fame from that.

VGU: So for the moment your main platforms seem to be Facebook and then Android and Apple devices, which are obviously quite social areas. With the development of newer consoles becoming more social hubs as well, do you think you’d like to move your games like Farm Heroes Super Saga onto consoles like a Playstation as a free to play?

Ceri: I guess the philosophy of KING has always been, we will go where the players are. That motivated the move to Facebook then on to mobile. We’ll always explore new possibilities and technologies to see where people are playing, and see if they are the kind of players who want to play our game, and if it would make sense putting it there. It’s certainly a possibility, so never say never.

VGU: A weird question just popped into my head talking about narrative a moment ago…I’m sure you’re aware in the last couple of week there have been both an Angry Birds and Warcraft movie with quite a successful go at a video game movie. Would you like to see Farm Heroes go to the big screen?

Ceri: Erm…I have absolutely no idea if it would work or not, I’ve not seen Angry Birds yet although I imagine it won’t be long before my kids drag me along to see it with them. I’m not personally aware of any of the plans to do that, I couldn’t really comment either way, but it’s a wonderful idea.

VGU: So what’s the next step for KING beyond Farm Heroes Super Saga?

Ceri: Well what we’re doing with Super Saga is building on the Farm Heroes Saga franchise, much like Candy Crush have done with their sister titles. Which has always been a strong strategy for KING; find out which games people are playing and enjoying, and build on them from there.

Ceri: Haha, probably not because of the difference in game play, but more likely would be events that could be shared across our games. Maybe people can play their chosen game and get some sort of reward over and event, which is something we’ve done before.

VGU: What would you say is the incentive to fans of the original Farm Heroes Saga, to move over to or play Super Saga alongside the original?

Ceri: Well I hope that fans of Farm Heroes will see the similarities and differences between the two games. Obviously we’re still matching cropsies, and that basic puzzle and strategic element has been enhanced from the original farm heroes. I hope they like the new features like the wind mode which helps you to manipulate the board in different ways. The bottom line is that if people want more challenge, in Super Saga we want to give a new challenge and new story with new motivation, without taking away from the original.

VGU: Brilliant, thank you very much for talking with us.

We had a chance to design some levels as well as play the newest version of Farm Heroes Super Saga, check out our pictures from the event below and let us know if you’re excited to get back out in the fields.