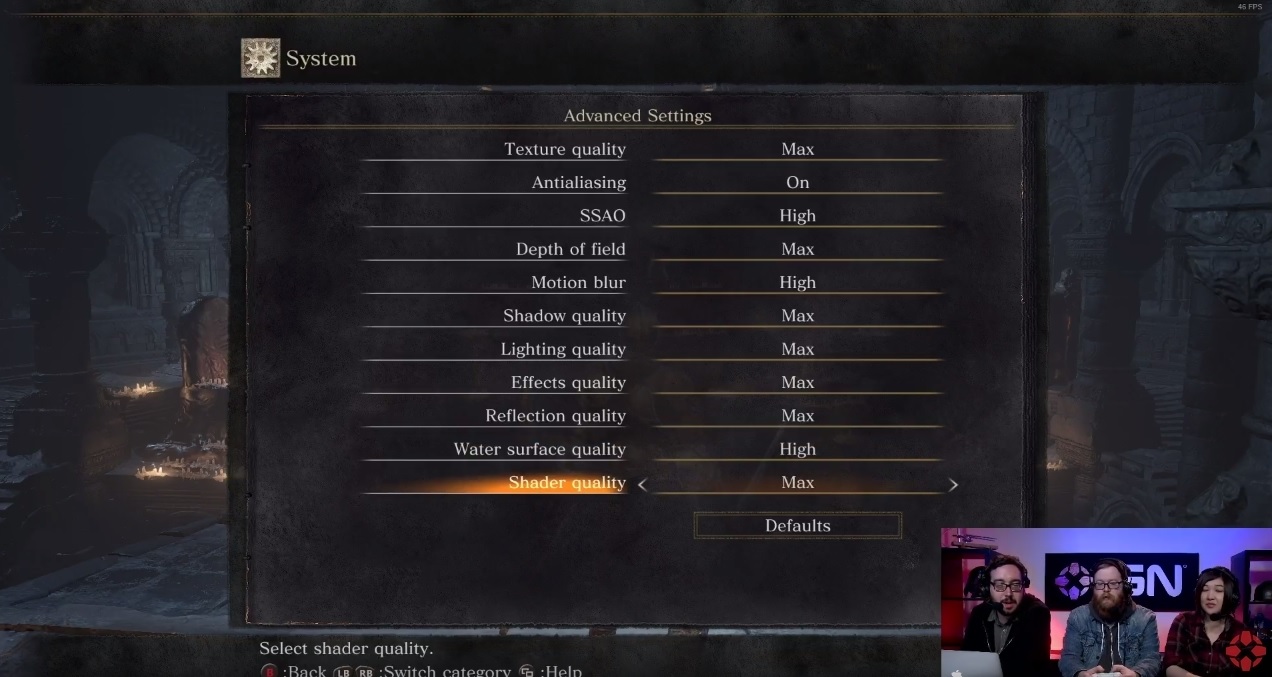 Thanks to eagle eyed Redditor RedQ, PC users have finally got a glimpse at the graphical options for Dark Souls III. Captured while IGN were streaming the first three hours of From Software’s soon to be released RPG, the options screen shows off the graphics options that players are able to tweak, ranging from the fairly routine antialiasing and motion blur options to more specific features like effects and shader quality. It may not be the most extensive options menu that some PC users may have hoped for but it is a damn sight better than the original Dark Souls and hopefully won’t require a Day One fan mod to access all options.

The only bad news is that according to RedQ that even with a GTX980 graphics card, Dark Souls III did not hold a steady 60fps at all times and that there still were frame drops on this high end graphics card. This will not be the end of the world as at least the PC version runs at 60fps unlike the console versions, but serious performance nuts will be put off by the lack of a rock solid frame rate. Your performance may vary but hopefully, the frame drops are not as terrible as those found in Dark Souls, where entering Blighttown turned the game into a slideshow on certain rigs. You can check the Reddit thread for the screenshots, including a screenshot of the keybinding options for Dark Souls III, as well as a link to the full three hour livestream hosted by IGN.

We are now exactly three weeks from the Western launch of Dark Souls III, with the Japanese release being in just two days. If you wish to be spoiler free, I’d stay far far away from any Souls themed Reddits, Youtube channels or forums to avoid being spoiled. If you are really desperate to get Dark Souls III as soon as possible, certain streamers are being allowed to stream the English version of Dark Souls III from Thursday, with many streaming the Japanese version from Friday so you can line up your viewing for then. You can also set up a Japanese PSN or set your Xbox location to Japan if you want to preload the digital version of Dark Souls III and play when it goes live on Friday.