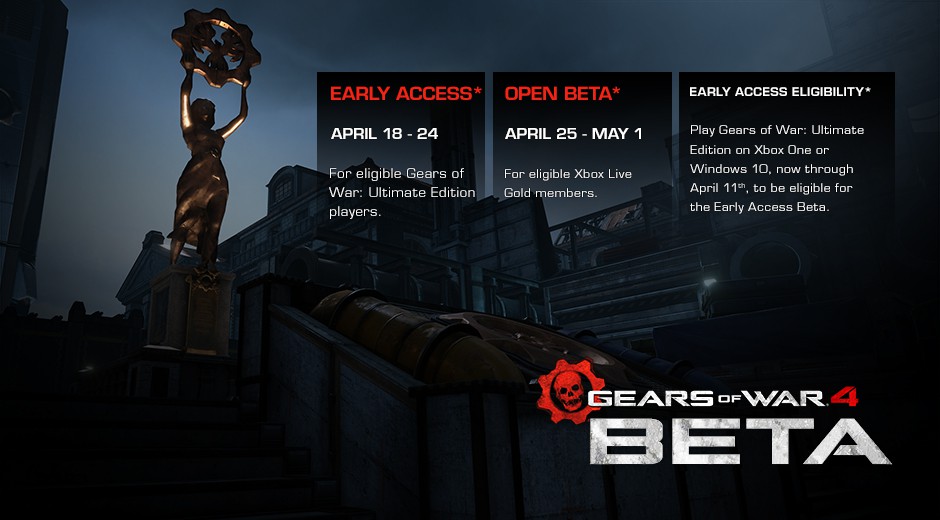 Get your protein shakes ready because shit’s about to go down. The Gears of War 4 multiplayer beta finally has a release date, with an early access period starting on April 18th for owners of the Gears of War Ultimate Edition whilst everyone else gets to join the fun on April 24th. The beta itself will last until May 1st so even if you haven’t played Ultimate Edition, you’ll still have a full week of playtime.

Additionally, Microsoft and The Coalition are extending the period of time in which you can qualify for early access, meaning you can get into the Gears of War 4 beta if you log on to Xbox Live and play Gears of War Ultimate Edition on Xbox One or Windows 10 by 11 p.m. PDT, April 11. You can read all the details on Xbox Wire.

We have no idea on the size and scope of the beta yet, but it seems likely that we’ll get at least a couple of maps and game modes to mess around with. As we don’t want to pilfer their rather extensive coverage, pick up a copy of this month’s Game Informer for a ton of details on Gears of War 4. At any rate, we can’t wait to get back out there and chuck some bullets at them grubs when the beta hits.

We’re hoping Rod Ferguson and the team at The Coalition can recapture that Gears of War magic and thankfully everything we’ve seen so far suggests that they’re nailing it. See you out there when the Gears of War 4 beta hits next month. We still have a little wait ahead of us before E-day though, so in the mean time why not check out our other coverage of Gears of War 4 and Gears of War Ultimate Edition.