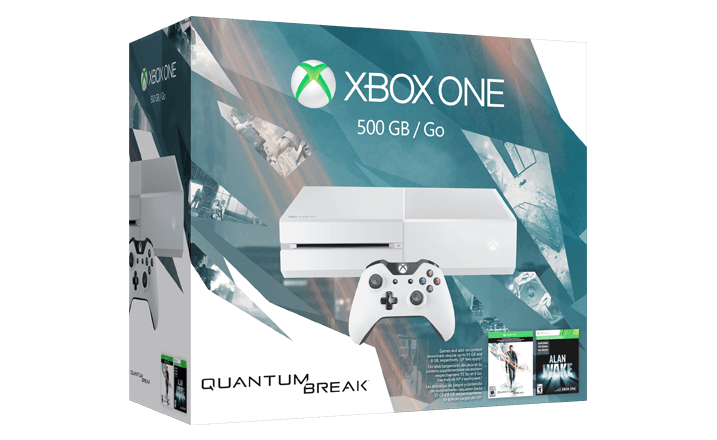 Long-term Xbox One owners or new fans of the console can get their hands on a white special edition Xbox One console at a new reduced price of £279.99 (down from £319.99). Bundled with the highly anticipated upcoming shooter Quantum Break, the bundle includes: a matching white Xbox One controller, a digital copy for Alan Wake for Xbox 360 (backwards compatible on Xbox One) and a 14 day Xbox Live Gold trial. For the price, it’s a helluva good deal.

Quantum Break, from the developers Remedy Entertainment, introduces Jack Joyce a man who got caught in a time travel experiment that went horribly wrong. Time as he knows it begins to breakdown and he must put it right again. Pursued by a secret corporation, the wayward experiment granted Jack the ability to briefly stop time and can use this new power to thwart anyone who stands in his way. Quantum Break was first announced at the Xbox One reveal show back in May 2013 and is exclusive to Xbox One and PC.

The bundle is available to pre-order now ready for release on 5/4/2016 from the official Microsoft Store at the discounted price. It’s worth noting however that surprisingly the console is a 500GB version, rather than the new 1TB console that has recently been released for standard black and other special edition design Xbox One consoles. It might be worth waiting to see if Microsoft release a 1TB version or if you really can’t wait, external hard drives are available to add essential space. The average size of a game installed on the HHD is anywhere between 20GB to 50GB, so external hard drives are really considered a necessity when it comes to the Xbox One.