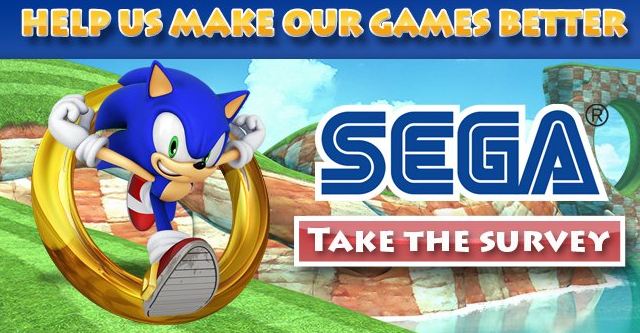 In a move that truly shows the mindset that Sega is currently in, the once proud forerunners of the video game industry are reaching out to their fans for help. They’re not asking for crowd-funding or begging people to buy their games. They are however asking followers to fill out a survey on how they can improve their games in the future. It’s certainly an unusual way of going about the potently massive overhaul Sega may undergo but hey, Rome wasn’t built in a day.

This comes after a statement made last summer by Sega’s CEO Haruki Satomi when asked about the current state of Sega. In which he admitted that Sega had lost its way.

“Sega in the ’90s was known for its brand, but after that, we’ve lost trust, and we’re left with nothing but reputation. We’d like to win back the trust and become a brand once again.”

Whether or not you consider this to be an act of sincerity or desperation, you can’t begrudge them for wanting to make things right. A survey may seem like a simple and ineffectual method of doing so, but at least they can hold their hands up and admit they’ve got nothing. The comprehensive survey, which can be found here, asks a multitude of questions about the company and even your own personal feelings on them as a company.

Personally, I would encourage everyone to get involved and have their say. Despite them falling off the wagon in recent years with their own original content, they have published some excellent titles like Alien: Isolation and Bayonetta so there is clearly some heart and soul left in the company. Give them a chance guys.