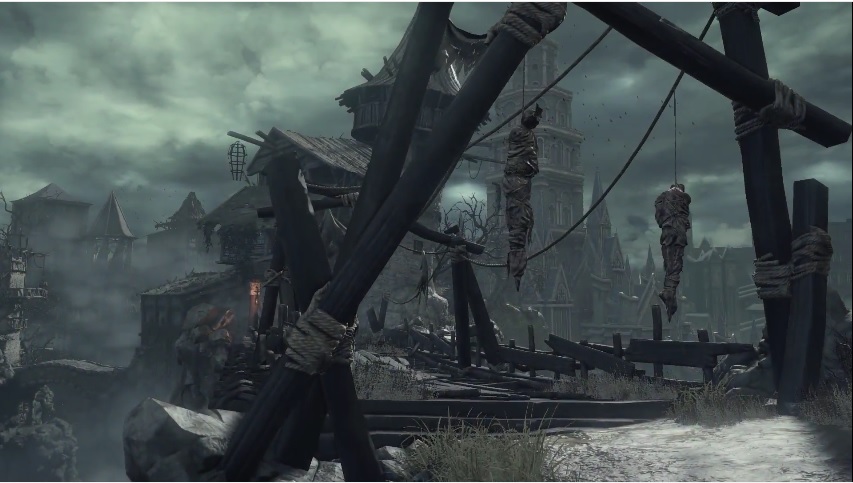 The hype train is thundering along for From Software’s 3rd installment in their medieval fantasy trailer, as another trailer for Dark Souls III has released today, showing off a nice chunk of in-game footage. The trailer is weirdly cut to a cover of ‘True Colours’ played in a minor key, which does seem to be a trend among both game and movie trailer but it really does not work here, as the main colours of Dark Souls III are those of ash, blood and fire rather than the rainbow of your soul.

The footage in the trailer does also seem like it may be from a lost chapter of Bloodborne, as there are shots of caged wretches which are similar to the Mensis dreamers found throughout Yharnam and the village of impaled bodies seem quite similar to the Charnel Lane seen in From Software’s gothic offshoot of the Souls series. There is even a glimpse of what looks like a giant chained tree boss, which is a lot more gothic than medieval and also creates a weird link between Dark Souls III and that Hex ride from Alton Towers.

There is a lot of Dark Souls III news coming out as of late, including the welcome news that Steam owners of Dark Souls 1 and 2 will get a discount on the 3rd installment, as well as a special limited edition Dark Souls III PS4 which is being released in Japan and will no doubt become a highly sought after collector’s item. Check out the trailer below and keep a watch out for even more Dark Souls III news as we approach April.