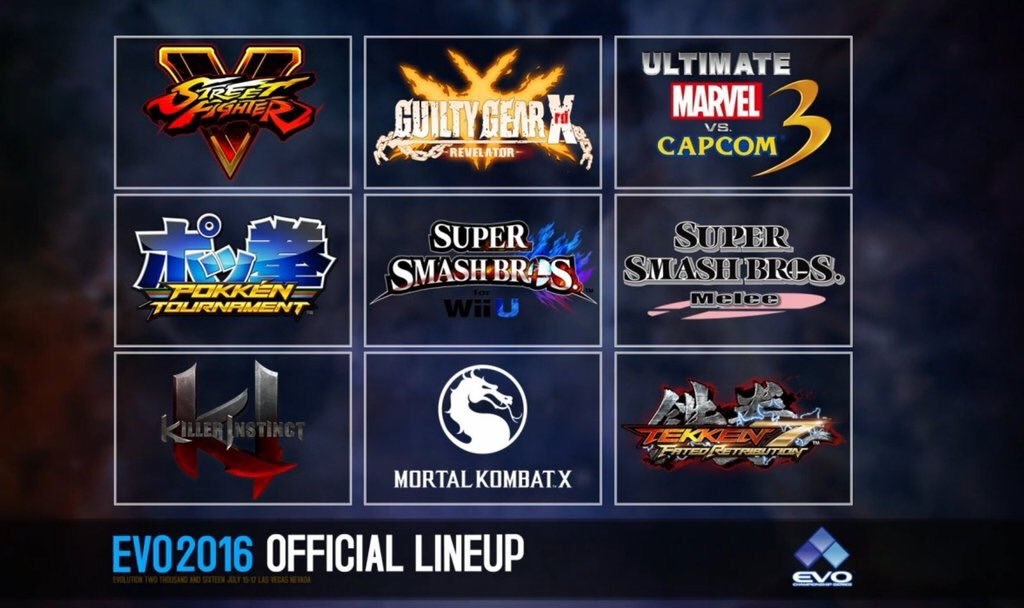 It’s something members of the FGC have been waiting for since July of last year. With the overwhelming success of EVO 2015 and the continued growth of fighting games, all eyes have been on the EVO staff to finally announce what games will be making an appearance at this year’s tournament. In a broadcast live from the Red Bull eSports studio in California, Joey ‘Mr Wizard’ Cuellar told a hyped audience that 9 games would be officially shown off at EVO 2016, ranging from old favourites to experimental choices. The 9 games are:

Guilty Gear, Street Fighter V and Melee were honestly no surprise. Guilty Gear Xrd was where one of the most memorable EVO moments ever happened, in the now infamous match between Woshige and Ogawa, Street Fighter V is the tournament game for the Capcom Pro Tour and Melee brought in record numbers so it was guaranteed a spot on the title card. Sm4sh was definitely up in the air, due to the problems with customs and the general moaning from the community but it did boast the most entrants out of any fighter at EVO 2015 so it would be stupid to not let it back into EVO 2016. With the KI Cup showing just how competitive Killer Instinct players can be, along with the new Season 3 content that is on the way very soon, it makes sense that KI returned and Mortal Kombat X was another shoe-in, due to its continued popularity and competitive scene via tournaments like the ESL.

Marvel was the game that was really on a knife edge going into EVO 2015, with many proclaiming it to be dead and that it was never going to make another EVO. However, thanks to the amazing Top 8 of Marvel which saw unconventional squads beat both god tier teams and players, it would be unfair to cut Marvel’s legacy short by not giving at least one more go after the insanity of last year. The main wild card of EVO is Pokken, which is a game that many think will not be at all competitive and has quite the technical restraints to play it in a tournament setting. It requires two Wii Us linked together via a LAN cable and rumours swirling round the ability to use certain controllers has made many consider Pokken to be a complete bust. Personally, I am in the camp thinking that it will be a bust, but at least a very enjoyable bust. Pokken seems to be balanced as much as the Naruto Ninja Storm games are, which is to say that they are completely broken but I could be proved wrong. Tekken 7 Fated Retribution will also be included, being played only on arcade cabinets as the game is yet to be released on consoles, even by July of this year. It won’t be a problem though, thanks to EVO 2016’s massive venue compared to last year.

That was another bombshell announcement from the stream that EVO 2016 will be moving from its usual spot at Bally’s and will now be held at the Las Vegas Convention Centre. This means there will be ample room for every game to run, making Friday and Saturday run even smoother. What was even more amazing is that for Sunday finals, EVO will be moved from the convention centre to the 12,000 seater Mandalay Bay Sports Arena which is just phenomenal. Seeing finals in a proper sports arena will be an amazing experience and will really show just how far the FGC has come over the past few years. Mortal Kombat X, Street Fighter V, Guilty Gear Xrd Revelator, Super Smash Bros Melee and Ultimate Marvel 3 will all be on Sunday in the arena, while the rest will have finals on Saturday in the convention centre.

EVO 2016 is setting up to be the tournament of tournaments so get saving now if you want to go. Make sure to check out the official EVO website for details on tickets, hotels and more. Get hype!