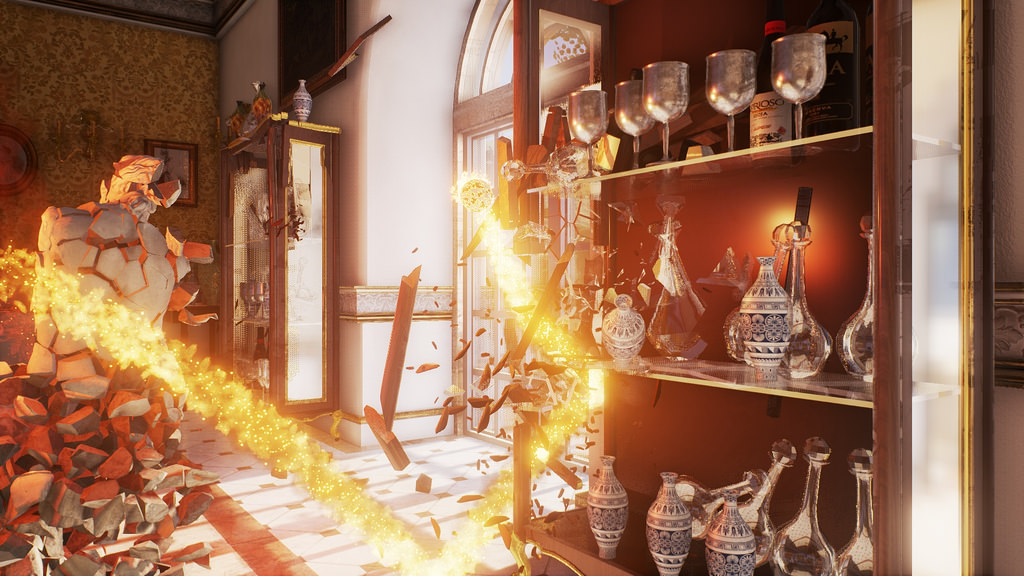 2016 is looking like a good year for off the wall golf games. We’ve had the announcement of 100ft Robot Golf where you hit the links as a giant mecha and can flatten cities to clear a path to the green and now we have Dangerous Golf, where the goal is to cause as much destruction as possible with a flaming golf ball.

Dangerous Golf is the first game from the tiny team at Three Fields Entertainment, a new British indie studio founded by 3 ex-Criterion and Ubisoft devs. Taking inspiration from the physics based destruction of a game like Burnout, Dangerous Golf seeks to use the power of Unreal 4 and modern day physics engines to create a symphony of destruction for players to enjoy. The goal of Dangerous Golf is very similar to Crash Mode from the original Burnout series, which is to cause as much destruction as possible off a single golf swing while also trying to sink the ball into the hole. So far, settings you can smash up including an imperial palace, a rural petrol station and a hotel kitchen but the people over at Three Fields have said that there will be up to 100 holes when the game launches in May.

In a glorious hybrid of Burnout and NBA Jam, doing enough damage in a single swing will activate your Smashbreaker (a playful nod to the Burnout Crashbreaker), which lets you ignite your golf ball and gain control of it for a short time to cause even more havoc. You can only imagine the replays and gifs that will emerge from Dangerous Golf, as players create minute long chains of destruction off a single drive. Dangerous Golf will have online multiplayer as well as sofa co-op, meaning you and your friends at home can take turn in destroying as much precious china and gaining the highest score.

The people over at Three Fields have stated that Dangerous Golf is just the first in a series of games about speed, carnage and excitement and that there is a distinct possibility of a Burnout spiritual successor should Dangerous Golf sell well. Dangerous Golf will be released as a downloadable title for PS4, Xbox One and PC and is currently scheduled for a May 2016 release.