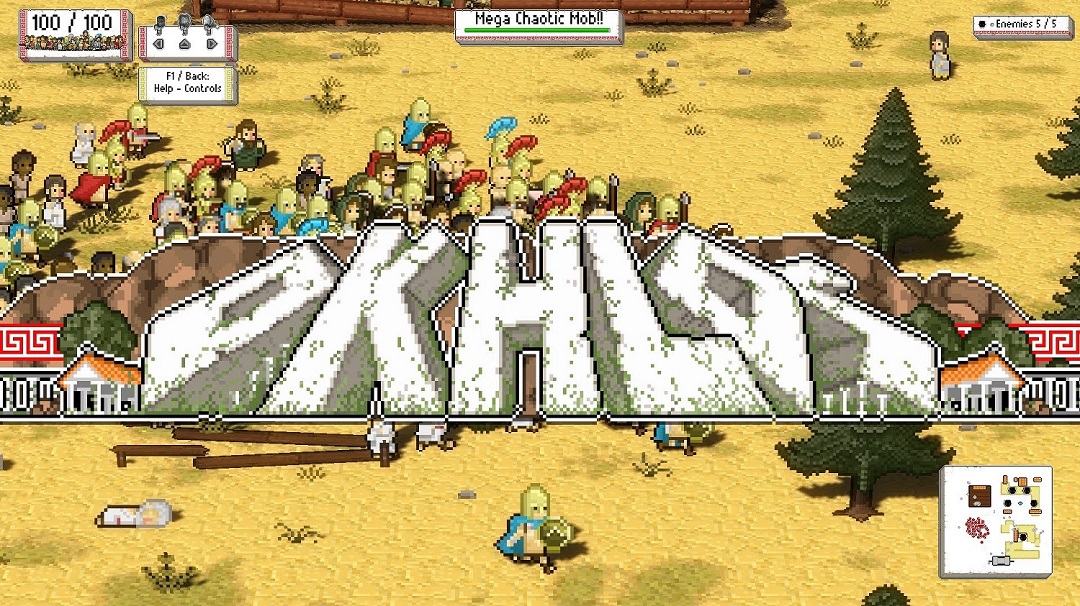 In a partnership between Devolver Digital and Coffee Powered Games, the ‘mob dramedy’ Okhlos is coming to PC, Mac and Linux in March. For those who aren’t versed in your made up Greek history, Okhlos has you taking the role of an unnamed Grecian philosopher who begins a revolt against the Olympian Gods after the Athens School of Philosophy is destroyed by the foot of a clumsy immortal, killing everyone inside. As head of the mob, it’s your job to gather your fellow countrymen to your cause, tear down buildings, recruit fellow rioters and eventually take down the gods and establish an ochlocracy over Greece.

You could liken it to Pikmin but with less focus on the reclaiming lost ship parts and treasure and more throwing countless lives at a problem until all your forces are dead or the enemy is a pile of bones or rubble. On your travel across a randomly generated series of cities, you will upgrade your fighting force with better weaponry, more people as well as special units which give your angry mob that extra bit of power. Along with battling with the 12 major Olympian gods, you can also expect to fight other mythological figures like the Minotaur or the Oracle of Delphi as you establish your rule over the country. Be aware that Okhlos is a roguelike of sorts, with players having to start at the beginning of their mob rampage if their philosopher is killed. You can continue fighting if there are other philosophers in the mob to take your place but if you are out of men in togas with big beards, it’s back to the start.

The fight will not be easy but will probably be quite amusing, as you watch your ragtag band of philosophers, hoplites, angry cattle and ordinary Greeks fight Zeus and his compatriots for the future of Ancient Greece. Check out the trailer below and beware Greeks gifts of pain when Okhlos arrives in March.