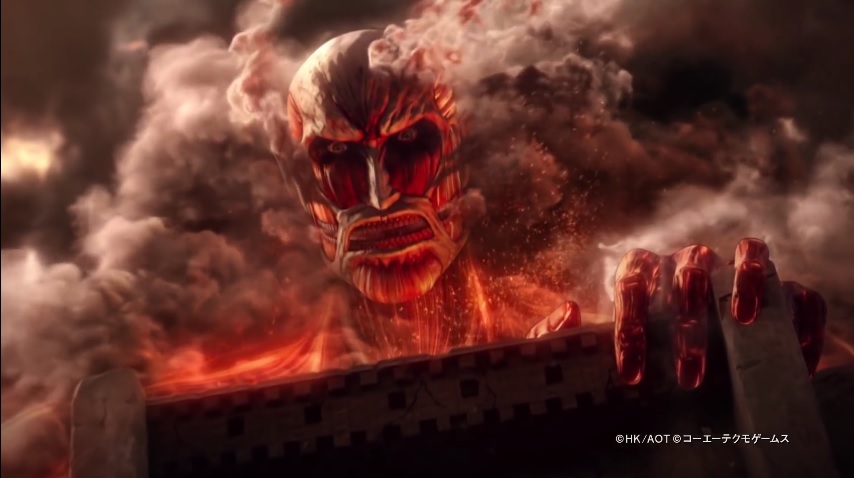 In the latest trailer for the Attack on Titan game being developed by Tecmo Koei and Omega Force, we’ve had a glimpse at not only some jet powered Titan slicing, but some actual footage of possible Titan versus Titan fighting. The actual gameplay seems a bit like if you got a mech fighting game like Armored Core, mixed it with a bit of Monster Hunter and then put in giant upsized humans in the mix, which is certainly a game type which has not been explored outside of that Attack on Titan webgame.

We also see a look at destructible buildings in the trailer, when a Titan smashes through a set of buildings as one of the Survey Corps zips away to avoid the strike. It’ll be interesting to see how in depth the combat is actually going to be for Attack of Titan, seeing as the Titans can only be felled with a strike to the back of the neck so I imagine the core gameplay could get dull very quickly.

As for the Titan fights, they seem to be limited to certain story missions rather than being an option you can use in general missions, in order to keep it balanced with the anime. Speaking of which, the visual style of Attack on Titan mirrors that of the anime almost exactly, thanks to some great cel shading and fluid animations to match the speed of the humans boosting around their giant enemies. The Titans do look as creepy as they are in the show, being one part stupid looking and three part terrifying as some flail their way towards you, while others charge at full speed like a sinewy freight train.

Attack on Titan is set to be released in Japan on February 18th and will be launching on PS3, PS4 and PS Vita. A Western launch has been announced for later this year, but it has yet to be finalised.