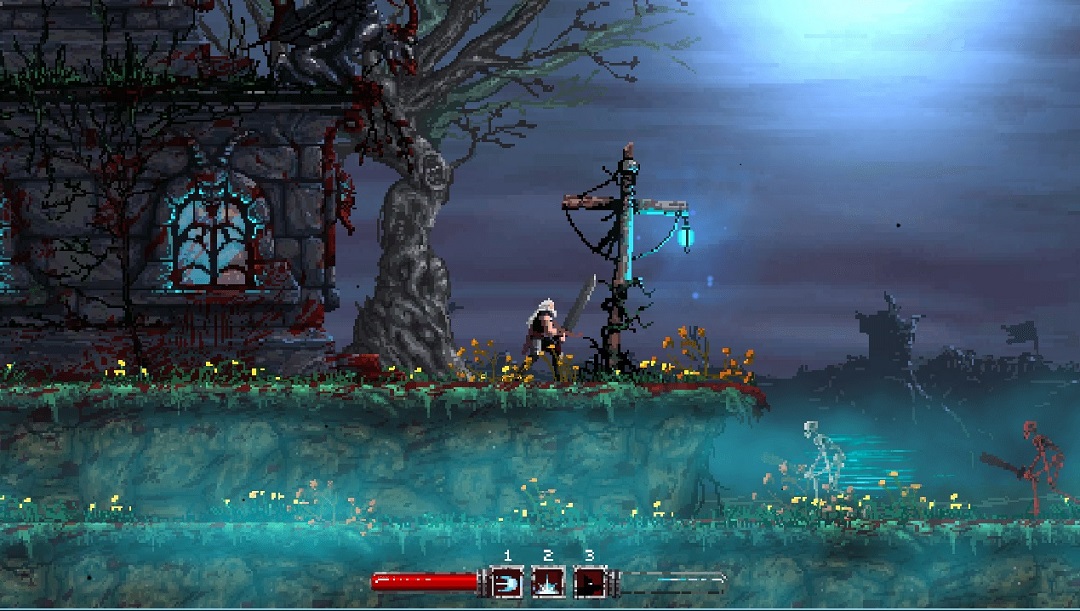 Have you ever wonder what would happen if old school Castlevania and an Iron Maiden album cover had a child? Well, look no further than Slain!, a new hardcore platformer from Wolf Brew Games that sees you hacking your way through fiery pits, boneyards and plenty of gnarly looking monsters, while a metal soundtrack wails in the background. You play Bathoryn, a silver haired warrior who must quest through 7 towers of peril to defeat 7 evil overlords in order to liberate the land. This of course, means hefting a load of giant weaponry across increasingly treacherous terrain, while carving up werewolves, zombies and all manner of other monsters that you’d find adorning albums in the Metal section of HMV.

You’ve also got some spells to use in battle, like shooting out ethereal blades or setting your own weapon on fire to help destroy the hordes in your path. There will be some light puzzle solving and platforming in between killing bosses and exploring the 7 towers so be prepared to navigate some perilous jumps. I would say it’s more in line with Dracula X and Super Castlevania IV rather than Symphony of the Night, but there are some RPG elements in play with you switching and upgrading your weaponry as you progress up the towers.

To compliment the metal pixel art, there is an equal metal soundtrack to round out the thoroughly brutal package that is Slain! Expect to headbang in between actually banging your head against the table while trying to negotiate a tough platforming section. Slain is coming to Steam on the 27th of January with it coming to PS4, Xbox One, Wii U and hopefully PS Vita in the not too distant future. Check out the short gameplay trailer below if you want to see this brutal platformer in motion.