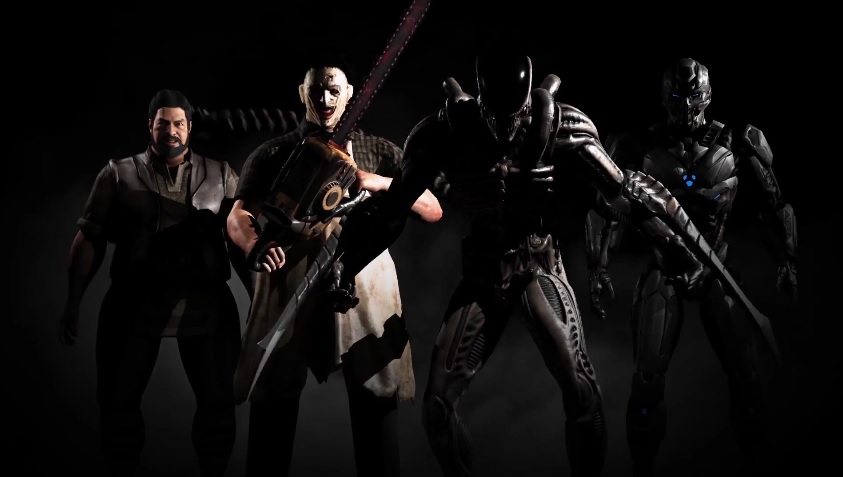 As promised by Ed Boon on Twitter, the people over at NetherRealm Studios have released a gameplay trailer for Kombat Pack 2 for Mortal Kombat X, showing the Triborg, Leatherface, Bo Rai Cho and the Alien in action and my god, do they look brutal. Leatherface stands out as the gnarliest fighter out of this bunch, with his chainsaw grinding through opponents, doing some horrific grapples with the spinning piece of logging equipment, as well as braining people with hammers and other makeshift weaponry. Bo Rai Cho seem a lot more mobile, flipping and somersaulting over enemies, in between farting and projectile vomiting at his foes. One Variation for Bo Rai Cho has him sipping from a glowing flask, probably to augment his Drunken Fist while another Variation has him using a cane to flip enemies and get them into a juggle state. Triborg seems to take the best bits of Smoke, Cyrax and Sektor and making each character the best version of that fighter. Smoke seems to focus on tricky mixups using smoke clouds, Sektor has his missiles and jet teleport to deal massive damage while Cyrax has his bombs to control space.

The Tarkatan Alien rounds off the trailer and we get a decent look at its toolkit, with it popping down an egg to spawn a Facehugger which puts the opponent in a stun state, for it to then call upon another Alien to put the stunned player in a juggle to continue a combo. All of these DLC fighters seem incredibly polished already and their animations are incredibly expressive, which bodes well for their actual release. Another bit of news in this trailer is that the Pit stage from Mortal Kombat 9 seems to be returning as a playable stage, as seen through some sections of the video. Does this mean Stage Fatalities will be returning in Kombat Pack 2? It’s looking possible.

No news on the actual release date, but we’ll no doubt get a hint at the ESL Season 2 Finals for Mortal Kombat X which are going to be in the near future. Check out the trailer below and expect more news on Kombat Pack 2 very soon.