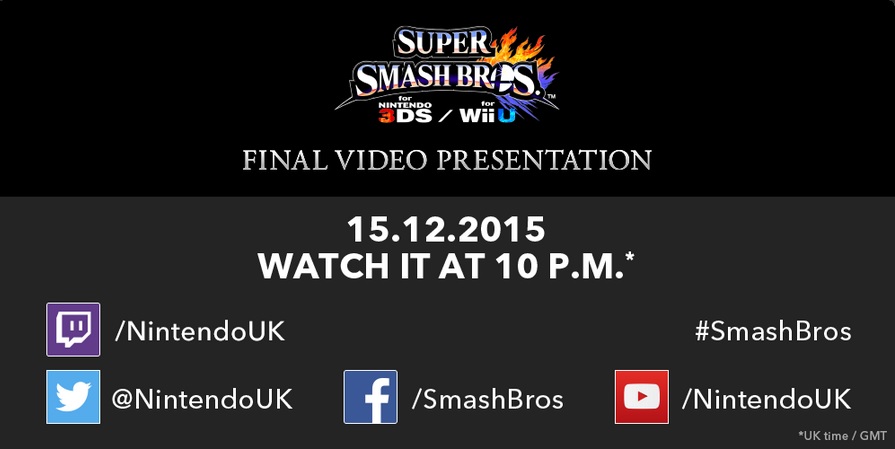 We seem to be coming to the end of the developmental road for Sm4sh, as Nintendo have announced that the last dedicated Smash Bros Direct will air at 10pm on Tuesday 15th. This Direct will be headed up by Mr Sakurai himself and will detail Cloud and more, according to the press releases issued across the various Nintendo Twitter accounts, so it will definitely go out with a bang.

So, what can we expect from the Direct? The biggest news will be the Smash Ballot winners, which will probably get confirmed but only receive one of them after the Direct has finished. My betting is that Sakurai will reveal that Cloud, a missing veteran like Wolf and maybe one Ballot character will be available after the Direct, with him laying out the release dates of the remaining Ballot characters for the coming months of 2016. The most credible rumour at the moment is that Shovel Knight is definitely a Ballot winner, as people who have ordered a Shovel Knight amiibo on Amazon have reported that their orders have been pushed back to December 15th. This could be a wild coincidence but you cannot be sure at this point.

We’ll probably also get some stage packs announced, maybe a Melee Classics one with the legal competitive stages and a Brawl one with some of the more wacky arenas. Mii Costumes will be in abundance as well, with some speculating that we may be getting a Subspace Emissary-esque mode for Wii U, based on the Brawl music heard in the initial Direct announcement back in November. I think this is a bit of a stretch but you never know.

I’d love to say Sakurai would also show off a full competitive remaster of Melee as well as a Capcom Cup style series for Melee and Sm4sh to start this year, but the likelihood of that is so minimal that you shouldn’t even count on it. Whatever comes from this Direct, it will round off a fantastic year for Sm4sh and cap off a game that has becoming a living game museum, full of characters you’d never think would all be present in a single game. This won’t be the end of Sm4sh completely, I imagine we will get some more Mii Costumes and reminders of DLC character release dates in future events but just don’t expect any massive announcements past this Tuesday. This does mean Sakurai has to reveal everything he has planned next week so be prepared for the Internet to break in places.

Are you excited for the final Smash Bros Direct? Who and what do you think is on the way on Tuesday? Tell us your thoughts below and get your bingo cards ready for the event. It will go live at 10pm GMT and 2pm PT so plan your viewing accordingly.