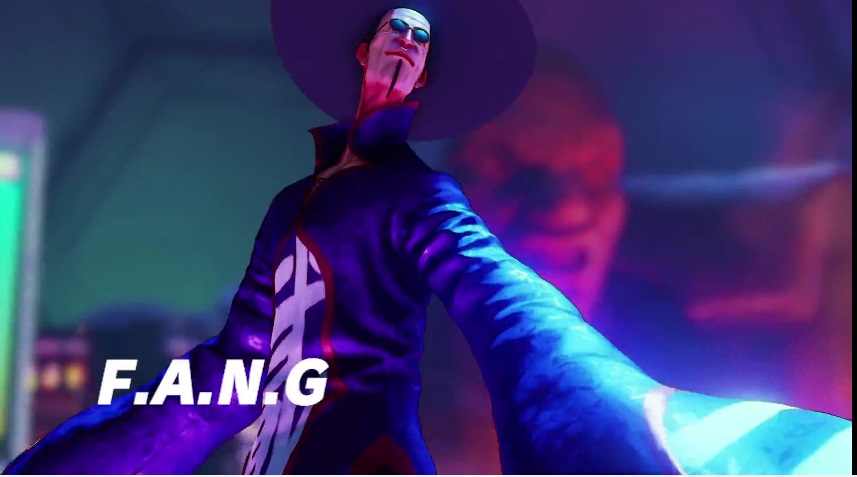 The final fighter for Street Fighter V has finally been revealed with no previous leaks! This final fighter is called F.A.N.G, a mysterious combatant who seems to be one part Jiangshi and other part Thin Man from XCOM. As the second in command for Shadaloo and a professional assassin, F.A.N.G uses poison to drain their opponent’s life so he can then glide in and deliver the final blow.

Along with F.A.N.G, we got a look at a new stage being the Shadaloo Base. F.A.N.G seems to have replaced Sagat in the Shadaloo hierarchy, as seen by his face replacing that of the Muay Thai beast on the mini Mount Shadaloo in the back. F.A.N.G’s V-Skill is Nishodoku, which sees him launch a slow moving poison projectile. If it hits, it will slowly drain the opponent’s health bar and turning it purple to show that the toxins are in effect. His V-Trigger is Dokunomu, which has him surrounding himself in a poison cloud, dealing constant damage to enemies close to him. F.A.N.G seems to be all about using his slippery movement and setting up devious mixups to deal as much damage as possible through his poisons. Being put in the corner by a F.A.N.G with his poison cloud active should be scary.

Also, Ono finally confirmed that the 6 additional characters that were found in the beta’s code for Street Fighter V are legit and that Guile, Alex, Urien, Ibuki, Juri and Balrog will be coming to SFV in 2016. You can also buy a Street Fighter V Season Pass to unlock all of these characters straight away but if you don’t want to put any extra cash down, you can buy all of these new fighters using the in-game Fight Money of Street Fighter V which you can unlock by playing the game. As for the premium currency called Zenny, 100 Zenny is equal to 79p and each DLC character costs 600 Zenny. It costs £24.99 to buy all 6 DLC characters in one go and each premium costume for Street Fighter V costs 400 Zenny so £3.16. The Season Pass is only available in North America at the moment but us Europeans can buy the Deluxe Edition of Street Fighter V for £71.99 up until launch, which includes the base game and all 6 DLC characters. After launch, the Deluxe Edition will cost £79.99.

Expect more SFV news and make sure to tune into the Capcom Cup finals tomorrow for some great Street Fighter matches.