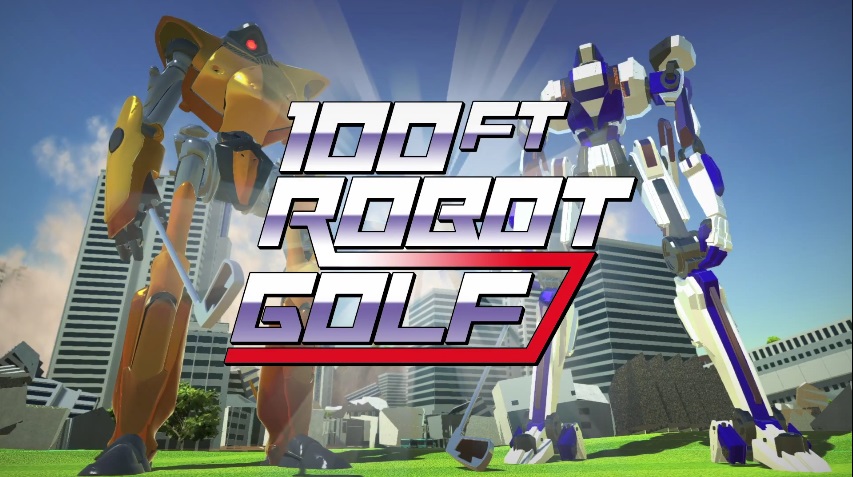 Now, I wonder what the premise of this game could be? Announced at PSX 2015 and by new studio No Goblin, 100ft Robot Golf is a game where the title needs no explaining. You play as a 100ft robot, playing golf across cities, the Moon and various other ridiculous locales. You can whack down buildings to clear a shot, bash into your opponent in order to mess up their drive or even bank shots of satellites to sink the ball. The golfing all happens in real time, so while you are trying to line up that final putt, you can expect your opponent to be winding up a mean swing to knock you right over. There are options to play the game turn based as well as with custom rulesets, so you tune your robot golfing habits to suit your own house rules.

Pilots and specific robots have different skills and specialties so picking the correct robo-golfer is key to victory. You also take your robot into the customisation hanger to give it a new lick of paint before taking it online against 3 other players. As well as online, you can play 100ft Robot Golf locally, in four player splitscreen or by handing the controller off to each player if you play a turned based rule set. 100ft Robot Golf is also coming to PSVR, where you can actually be in the head of the titular Giant Golf Robot and beat an enemy mecha to death with a huge 3 wood but it is not required to play the game. It’s simply an added feature, should you wish to really take the role of a huge mechanical sportsbot.

I’m certainly up for hitting the links as a giant mecha so we’ll hopefully hear more about 100ft Robot Golf very soon and tuned into PSX 2015 for more.