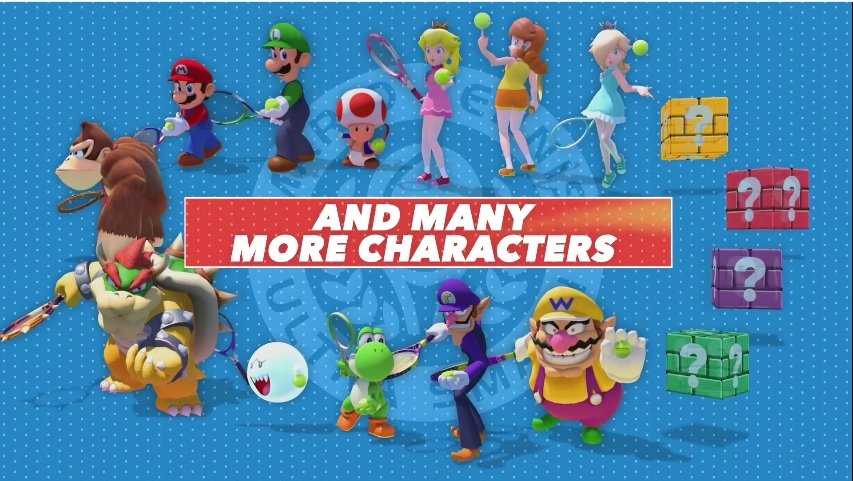 In a new trailer released by Nintendo today, it has been revealed to no great surprise that there will be amiibo support for Mario Tennis: Ultra Smash. Scanning amiibos in will create AI controlled characters for you to play against in the offline Knockout Challenge mode. They can also be used as partners in online doubles matches. Yes, you heard that correctly, Mario Tennis: Ultra Smash will feature online multiplayer.

Like the local multiplayer mode, online play can support for up to 4 players, in either doubles or singles matches. No doubt like in Mario Kart 8, you can bring in a local player as your doubles partner when playing online, as well as an amiibo partner. According to Nintendo, very similar to amiibo fighters in Super Smash Bros, amiibo partners will level up and become more experienced the more you play with, or against said character. So far, Mario, Luigi, Peach, Bowser, Wario, DK, Toad, normal Yoshi, Yarn Yoshi and Rosalina have been announced as compatible amiibo.

Not fit to just announced these two features, Rosalina has been shown to be a playable character via this trailer, firmly cementing her as a member of the Mario family and securing her future invites to any parties, rounds of golf or street basketball Mario has in the future. Seeing as Waluigi made his debut in the first Mario Tennis iteration on N64, I would not be surprised to see the lanky clone receiving his own amiibo very soon.

Check out the feature trailer below and look out for Mario Tennis: Ultra Smash on the 20th of November. I hope Shy Guy makes it back in, he was so good in the original.