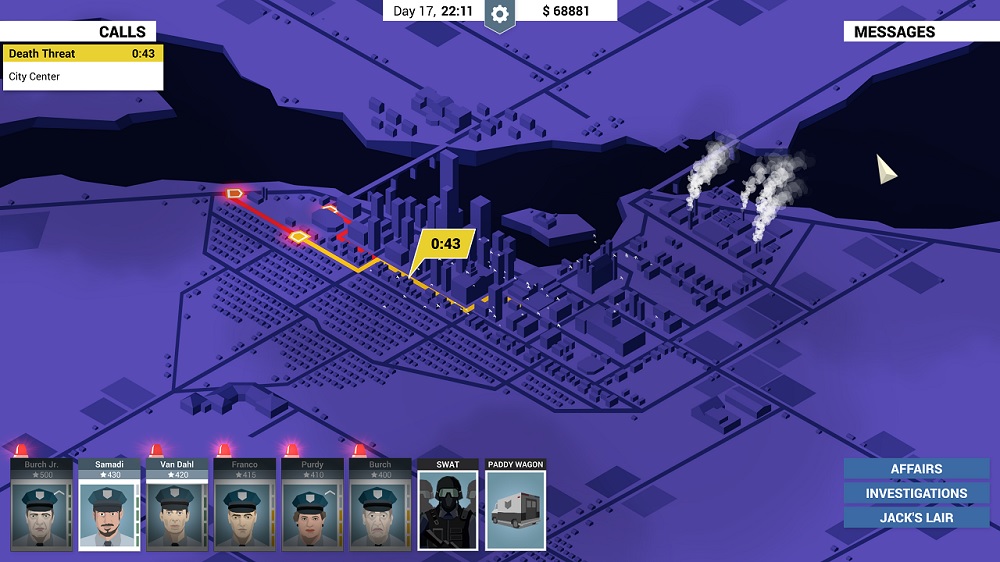 After their successful Kickstarter campaign in January of this year, Weappy Studio has released the first gameplay trailer of their police themed strategy game, This Is The Police. In This Is The Police, you play Jack Boyd, a haggard police chief trying to keep the peace in the city of Freeburg, which is slowly sliding into mob rule. Jack only has 180 days before retirement and he wants to fulfil a life long goal of exiting his career $50,000 in hand for a cushy retirement. Playing by the book, this will never happen so it is up to the player to make the decision: are you going to leave the office with a clean conscience, or are you going to be a dirty cop and get out before everything goes to hell?

The gameplay of This is The Police has you managed the day to day runnings of a busy city police station. You need to respond to calls and dispatch officers accordingly, deal with larger crime networks and how to take them down as well as having to talk to the press and other public officials, in order to reassure the city of Freeburg that you are doing your job correctly. For all your good deeds, there is always that underbelly that you can dip into to help swell the retirement fund. The mob may offer you kickbacks on letting a drug shipment slip by, you could willfully engage in a campaign of misinformation during a trial or even help the mayor with hiding certain seedy activity. Freeburg is a seething cauldron that could spill over at any moment, so just be sure that it does wet your fancy new shoes in the process.

The minimalist art style looks intriguing and the openness and emergent stories which can come from trying to balance being an upstanding enforcer of the law and getting the money for that nest egg. The fact that you can just be a good cop, instead of being forced into being a bad cop for the sake of being gritty is a pleasant chance, as it is actually up to players as to whether they become yet another corrupt police chief. With a release date scheduled for December this year, I am looking forward to donning the cap and badge, and desperately trying to keep the streets of Freeburg clean of corruption. You can check out the gameplay trailer for This Is The Police below and vote for them on Steam Greenlight if you like the look of this police simulator. Also, John St John is doing the voice of Jack Boyd, so Weappy definitely have the grizzled cop sound down. I’ll definitely have to compare this look at crime prevention, compared to the one put forward by Other Ocean’s Giant Cop.