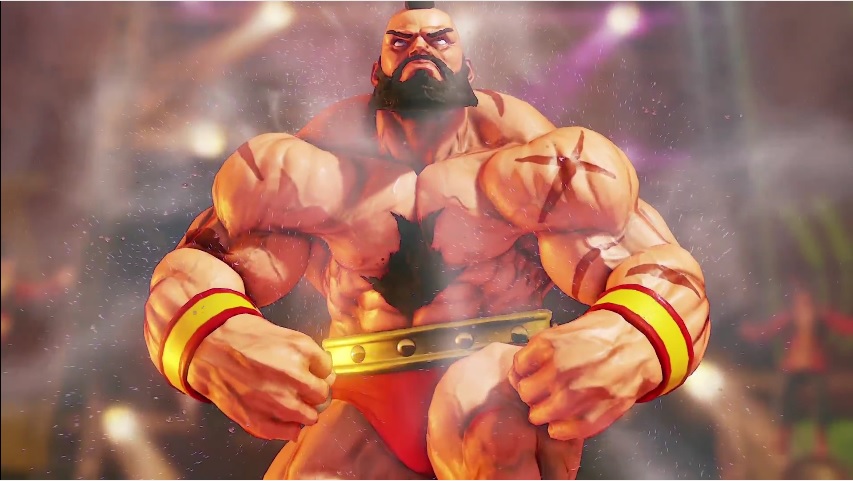 In a reveal from the IgoMir event in Russia, the Iron Cyclone Zangief has returned to scrap in the latest installment of Capcom’s flagship fighting game. Zangief brings his trademark Lariat and brutal throws to the PS4 exclusive, as well as a new technique called Iron Muscle, making his body as strong as the bears he used to wrestle in his younger days.

Visually, Zangief hasn’t changed much from his Street Fighter IV iteration, remaining the red speedo wearing, rippled muscle man that debuted back in Street Fighter II. However, as previously mentioned, his training between games has not gone to waste. His V-Skill is Iron Muscle, wearing his body turns a bright red and turns as hard as metal, allowing him to absorb one attack. The damage sustained during Iron Muscle can then be recovered, similar to grey health from a Focus Attack in USF4. If you hold down the medium punch and kick button and tap a direction, Zangief will lumber forward in Iron Muscle mode and hit an opponent with a mighty muscle flex once you release the V-Skill buttons.

As for his V-Trigger, Zangief turns into a literal Iron Cyclone with his Cyclone Lariat, which sucks opponents in and deals rapid damage. If you tap the buttons, Zangief does a quick on the spot spin but if you hold the V-Trigger buttons, he will continue to spin and deal multihit damage to an advancing opponent. As for the rest of Zangief’s moves, he seems to have gained armour on some of his attacks, matching his new iron physique and can now protect the skies as an EX grab, rather than being his Critical Art. He has got so beefy that Zangief can even headbutt projectiles to armour through them.

While some may have been expecting Alex as the other grappler for SFV, I’m quite happy that the crazy Russian bear wrestler is returning to break peoples’ backs with physically impossible throws. We’ve only got 3 characters left to be announced and with Brazil Games Show being this month and being another reveal location, we may have the entire Street Fighter V roster before the end of the year. Check out Zangief’s trailer below and tell us who you think or want the next 3 SFV characters to be below.