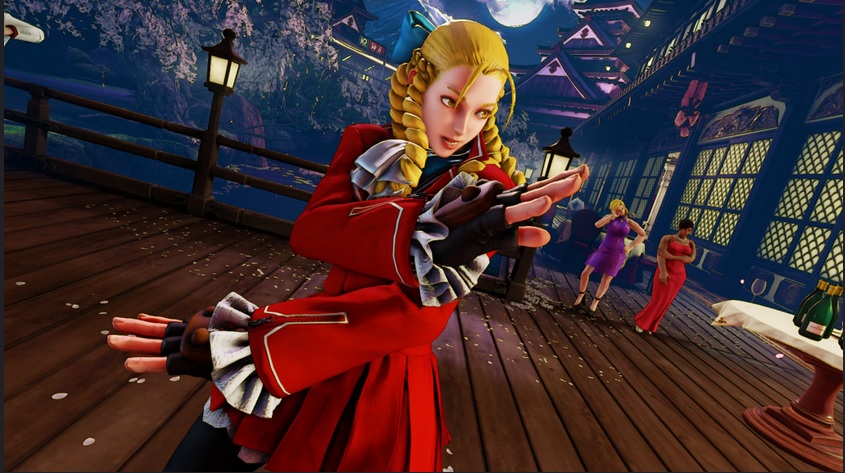 The graceful heiress has been a highly requested character, having only appeared once in Street Fighter Alpha 3 and it seems that Ono and his team have been happy to oblige, updating her playstyle and look for this new fighter. Karin is a well rounded fighter, using her new dash move to close distances and then follow up with a variety of quick strikes to damage her opponent. She seems to be based off Yun and Yang from the Omega mode of Ultra Street Fighter 4, as seen through her dash, V-Skill and V-Trigger. Her Guren-Ken signature moves are also back, giving you to mess up your opponents’ blocks with various multi-hitting moves once you activate her V-Trigger.

So, what are her V-Skill and V-Trigger? Her V-Skill is Meioken, a lunging palm strike (similar to Yun’s) which allows her to smash through projectiles and put opponents into a knockdown if it connects. Connecting this strike builds your V-Trigger and it can also be held for a short period before releasing, giving it better properties on hit and on block.

Her V-Trigger is the Kanzuki-Ryu Guren No Kata, which has Karin channeling her Ki to unleash the power of the Guren Ken. The Guren Ken is incredibly versatile, giving Karin the ability to transition into an overhead, a sweep, a backdash or even a flying throw should you react accordingly. This versatility gives Karin the ability to really control the pace of the fight and easily regain the neutral if she lands the Guren-Ken.

Karin’s addition means there are 4 representatives from the Alpha series in Street Fighter V and if rumours are to be believed, we may be seeing some Third Strike representation quite soon too. Brazil Games Show will be the next time we see a new fighter so watch out for then. Karin does still have her trademark laugh, if you are wondering.

Now to CFN, the Capcom Fighters Network. CFN is the community platform which is built into Street Fighter V’s online infrastructure, acting as the hub from which players can check stats, watch replays, send battle invites and so on. Current screens show that there will be a constantly updated world heat map on the CFN, giving players the ability to zoom into areas around the world to inspect battles currently being engaged there. You can even zoom into individual players, being able to search through their statistics, recent match replays and a variety of other bits of data. This data will also be useful in improving as a player, as you can check how many light punches you landed last match or the number of throws you have successfully teched, as well as the usual win/loss and character usage ratios.

That’s a lot of information to take in and you can check out the full rundown of info over at the Playstation Blog here. See Karin in action in the trailer below and expect more SFV news soon, as it is playable at EGX next week.

PlayStation Plus Free Games For April 2019
Powered by Magic