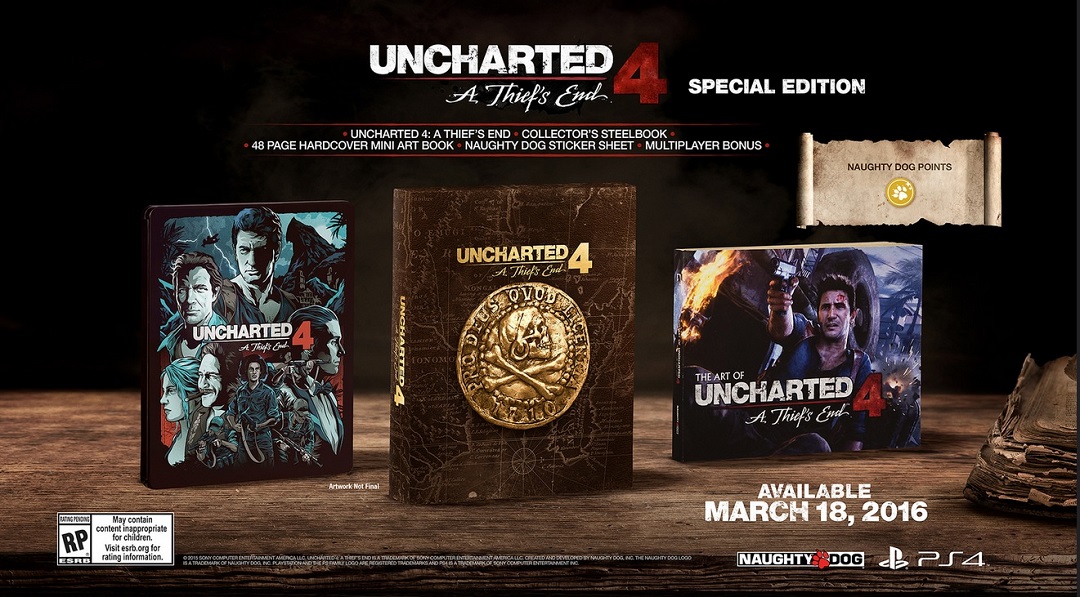 After being delayed to an undetermined time of spring next year, Sony and Naughty Dog have now revealed to the world that the heavily awaited 4th chapter in Drake’s saga of treasure hunting will be coming to PS4 on March 18th 2016. . The announcement didn’t stop there though as is the case with most AAA releases, Sony have not missed a trick to release 3 different versions of Uncharted 4, all with special bonuses and physical bits of tat for hardcore fans to fawn over.

The Special Edition contains a special steelbook cover, a 48 page art book by Dark Horse, a Naughty Dog and Pirate Sigil sticker sheet and and a pack of Naughty Dog Points, which are the in game currency which can be used to unlock specific multiplayer content.

There is then the Libertalia Edition which contains everything mentioned above, along with a 12″ Nathan Drake figure, three outfits based of Drake’s costumes in previous Uncharted games, two custom weapons skins along with a special baseball cap and Madagascar Sidekick outfit all for use in Uncharted 4’s online multiplayer.

For digital purchasers, you can upgrade your standard purchase to the Digital Deluxe edition, which includes the Uncharted 4 Triple Pack, a DLC set containing Uncharted’s first ever story DLC along with 2 multiplayer packs which unlock some legendary weapons and items. You also get an instant unlock of two multiplayer customisation items.

There are also special pre-order bonuses if you go to select stores, but these are just player and weapon skins for multiplayer. That’s plenty of extra stuff you need to factor in when buying your copy of Uncharted 4 so get planning already.