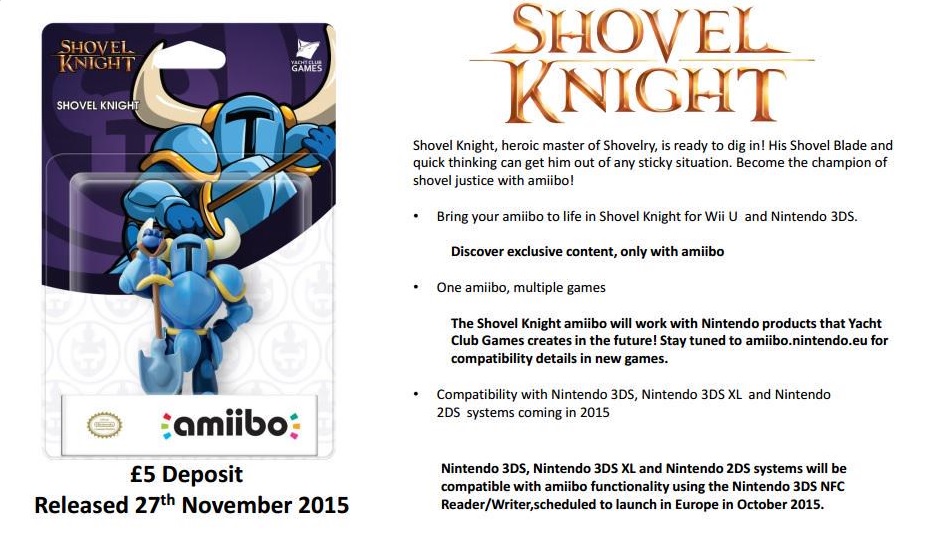 Whoops. In an early tweet by GAME Brighton today, the long standing rumour of a Shovel Knight amiibo has finally been confirmed by the UK games retailer. This amiibo will unlock exclusive content in the Wii U and 3DS versions of Shovel Knight and is probably the ‘megaton’ announcement that Yacht Club Games has been teasing to come out of PAX Prime. This Shovel Knight amiibo will also be compatible with future Yacht Club Games’ titles that come to Nintendo consoles, teasing that not only is Yacht Club possibly working on some exclusive Nintendo games but could also lend credence to the rumour that Shovel Knight may be one of the future DLC fighters for Smash.

As a huge Shovel Knight fan, I am incredibly happy with this news and will be buying the Shovel Knight amiibo as soon as it becomes available. If he comes to Smash as well, with a special stage and remixes of all the amazing music created by virt and Manami Matsumae, I will be a very happy man. Note also that the box art and render of the Shovel Knight amiibo is not finalised as of yet, so naysayers who are claiming that the lack of a Smash sign on it means Shovel Knight isn’t in Smash should hold fire just yet. All will no doubt be revealed over the weekend so keep your eyes peeled for more Shovel Knight news.