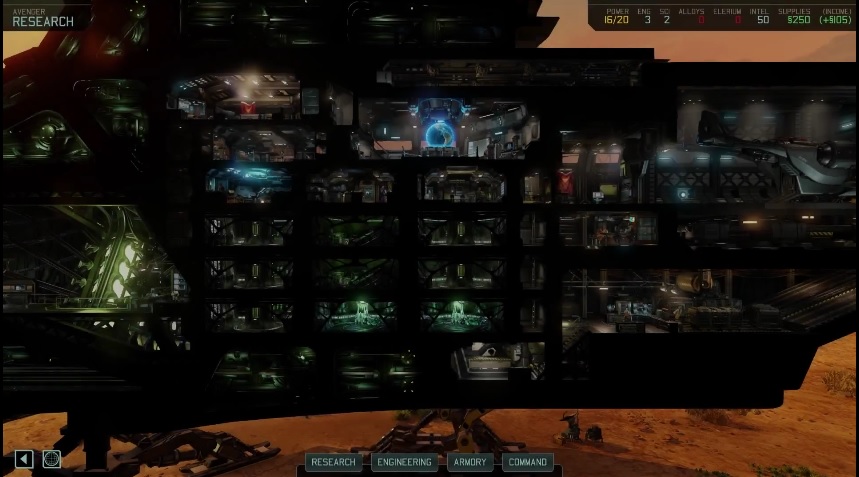 Good news Commander. Firaxis have released a trailer chock full of information on your new mobile base in XCOM 2, the Avenger. Made from a reclaimed alien transport, the Avenger is your constantly moving home and forward operating base in the fight against Advent and the alien forces which now occupy Earth. Besides the ever vigilant Bradford, a few new faces are now aboard the ship to fulfill roles which have been left unfortunately vacant. Dr Tygan, a former head scientist from Advent, joins as your head of research in place of the missing Dr Vahlen while Lily Shen takes on the role of lead engineer from her late father.

The main thing to note about the Avenger when compared to your XCOM HQ from Enemy Within, is the scarcity of resources. While Elerium and weapon parts weren’t exactly growing on trees in the last game, things are even more rare now as XCOM tries to claw back whatever supplies they can from their alien oppressors. Manpower is also now a key resource, with players having to really think out staff allocation and determine which departments need urgent staff in order to create new projects. Staff now act like soldiers, with each engineer or scientist having their own appearance and even special stats to help improve research or construction. This makes managing the Avenger more personal and reinforces how you are now a crack unit of select professionals rather than a massive underground operation which simply churns out soldiers and weaponry to fight the aliens. Everything is a lot grimier and cobbled together which really adds to the feeling that this version of XCOM has the deck stacked heavily against them.

One very welcome addition to the Avenger is the Guerrilla Tactics School, where Rookies can actually be trained in specific classes rather than having their class assignment being down to RNG. While it does take them out of the fight for 10 days, at least you can now properly craft a squad and fill gaps in your platoon by specifically training a Rookie to be a certain type of soldier. Speaking of soldiers, there is a much greater level of soldier customisation both aesthetically and gameplay wise. You can now select specific armour and weapon patterns, as well as tattoos and scars to decorate your hardened fighting force. You can even select the attitude of your squad members, ranging from laid back to intense. I’m not sure how this will affect gameplay but it may determine how each soldier deals with being panicked or it may increase squad morale if compatible attitudes are put in the same deployment.

Even your guns now have a wealth of customisation options, with players being able to select scopes, ammo types, camos and even the ability to name your firearms. I imagine there will be a lot of personalised equipment being used to rip through Advent’s force of humans and alien hybrids.

As for engaging with the rest of the resistance, it is your job to help build resistance HQs across the globe and try and keep in contact with fellow fighters. Unlike Enemy Unknown where the whole world was open to you at the start, it is the reverse in XCOM 2, with players having to slowly regain control of the Earth continent by continent until Advent is driven back and the aliens booted offworld. Moving to new areas can put your previously established ones in danger, so carefully managing the positioning of the Avenger and the status of your resistance HQs in paramount in keeping your grip on locations. The overworld now feels like an incredibly tense game of Risk, as you constantly dart across the world trying to keep your well earned regions from being overthrown by Advent forces.

When the Avenger moves and time passes, you will get reports from your Intel team about Dark Events happening all across the globe which gives you chance to plan your next move. You will get updates on where Advent will strike you next and even find out what upgrades Advent are themselves developing. This makes the fight against the aliens seem a lot more like an actual struggle, with them researching their own equipment to counteract against your own developments. You will need to choose which project you should strike back against carefully and be aware of the project dates of each of these Dark Events so you can rise to combat Advent. Intel points can also be spent to uncover Hidden Events, which will no doubt be much more damaging or threatening operations which could really set back XCOM’s efforts. You could even be attacked on route to a mission as suggested by the end of the video, which means you need to be constantly on guard for enemy strikes.

This gameplay video detailed a hell of a lot of information about XCOM 2 and we’ll no doubt get even more information at Firaxicon in October so keep your eyes out for more XCOM 2 news very soon.