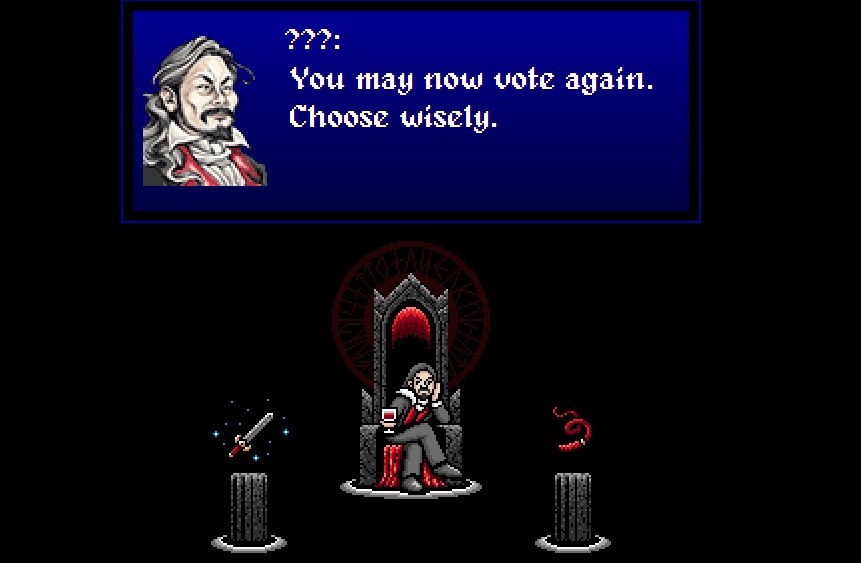 On a site simply called Sword or Whip, Castlevania producer Koji Igarashi seems to be teasing that his long rumoured spiritual successor to the series may be resurfacing very soon. The site has someone resembling Iga-san, dressed as Dracula from Symphony of the Night, sitting on a throne and asking visitors to pick either a sword or a whip. Visitors can repeatedly visit the website to cast more votes for either weapon, with Iga commenting on your picks and even assigning you a name if you pick a weapon enough times.

He makes some interesting comments the more times you pick, even asking ‘What is a man? Find out in a week.’ This is, of course, a reference to the infamous line from Dracula during the opening of Symphony of the Night, as well as suggesting that we will find out what this is all leading to sometime next week. One commenter on NeoGAF has comprised all the information which relates to this site, going back to a flyer from PAX last September, which has a pentagram which once decoded reads ‘What a wonderful night to have a KS.’ We can only assume that KS means Kickstarter and the fact that the same pentagram appeared on a teaser image on two Castlevania fan forums, showing the sword and the whip, suggesting that this Kickstarter will go live next week.

The Sword and Whip site went live on Monday so assuming this is real, expect the Kickstarter for Iga’s Castlevania-esque project to go up on Monday the 11th. If so, this game will join the long line of spiritual successor projects that have been given life through Kickstarter, like Mighty No. 9 and more recently, Yooka Laylee. Let’s just hope it is a wonderful night for a Kickstarter.