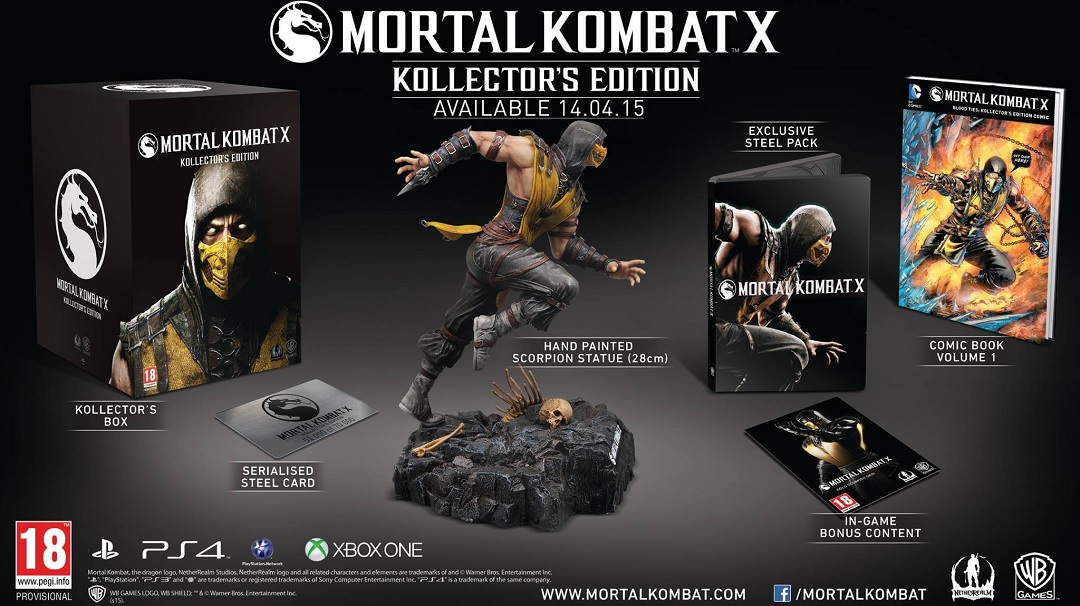 The Kollector’s Edition by Coarse will retail at £100 and will contain a Scorpion figurine, complete with a Certificate of Authenticity by artists Mark Landwehr and Sven Waschk. Along with the figurine, you’ll get a download code for a Gold Scorpion skin which resembles the figurine, as well as the Kombat Pack, which contains four additional fighters which are apparently a mix of new Kombatants and old favourites.

The standard non-Coarse Kollector’s Edition will cost £90 and will only be available from Amazon. This edition will also come with a Scorpion statue, by this time resembling his Mortal Kombat X incarnation, a steel pack for the game and serialised steel card, as well as the Kombat Pack and Golden Scorpion DLC. As an added bonus, you also get the first volume of the Mortal Kombat X: Blood Ties comic book with this edition.

There is the Gamestop exclusive Limited Edition for American fans, which will cost $95 and include the Kombat Pack and a Cold War inspired Scorpion skin. Finally, there is the Premium Edition which is a download only bundle, costing $90 and containing only the Kombat Pack.

While bonuses like the Scorpion figures and the comic book are alright, what worries me most about these Kollector’s Editions is the Kombat Pack that is bundled in. It sounds a lot like a Mortal Kombat X season pass and the fact that you already have Goro hidden behind a pre-order barrier, that is 5 characters that people who buy the standard edition are missing out on. I hope Goro will eventually become a free download and that these 4 other characters aren’t hidden on the disc, as NetherRealm will have a lot to answer for otherwise.