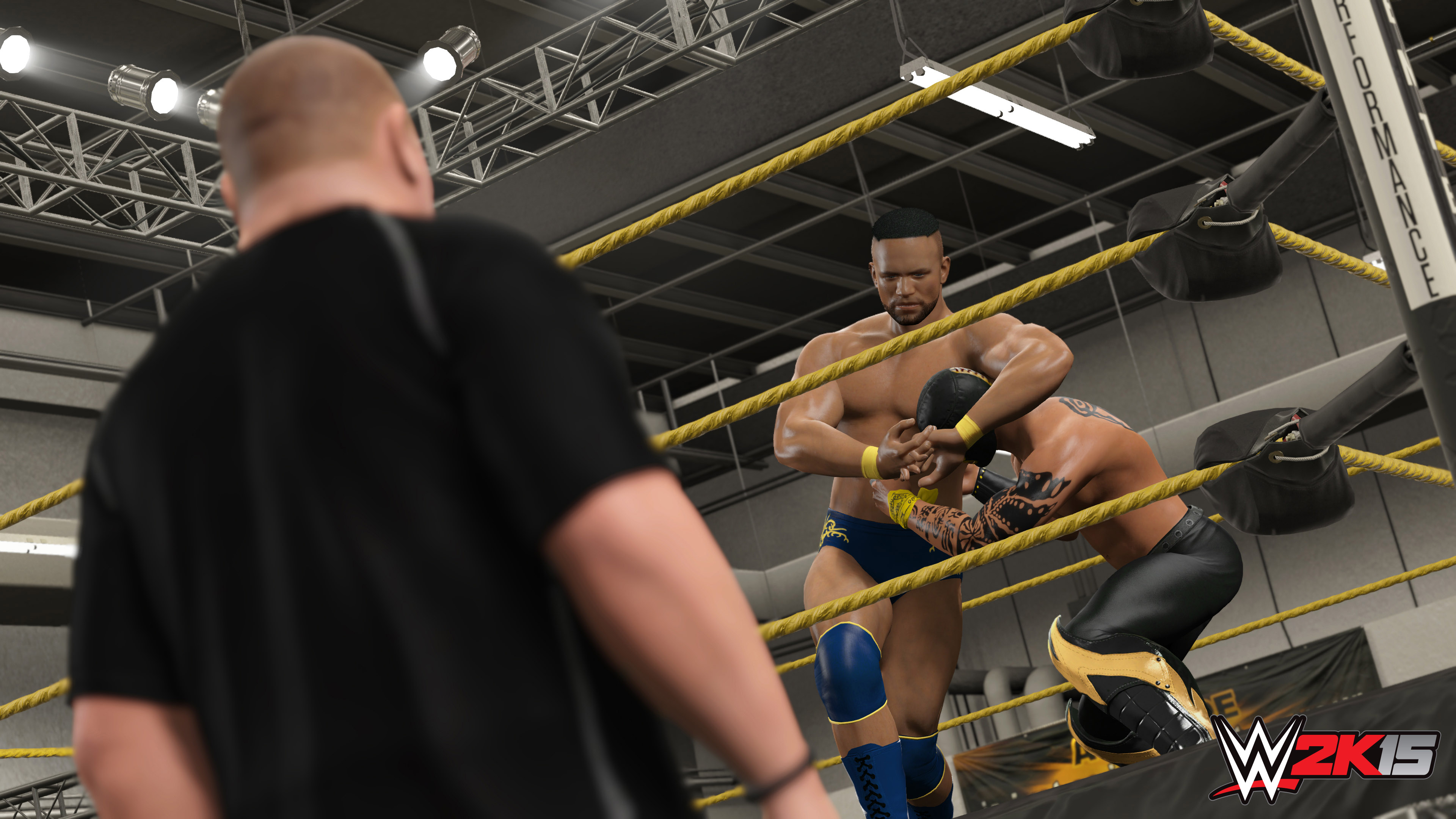 After trying out the game for the first time at EGX 2014, I was a little disappointed with how WWE2K15 felt. There were lag issues, the matches seemed very slow, and there were FPS drops between going in and out of the ring. My expectations were at an all time low, until I was invited down to London to try out the new Career mode on an updated build of the game. Would the game impress me any more since last time? It was time to climb into the squared circle and find out.

At the event there were four demos on show. Three were based around MyCareer, the newly titled Career mode for the game. These would start you off as a created wrestler either at the start of their journey at the training centre, mid-way through a rivalry on SmackDown, or straight into the championship fray on Raw. The SmackDown character was heel, showing you what it was like being the bad guy, whilst the Raw superstar was a babyface, appealing to the crowd and being the all around good guy. This demonstrated that your actions in the game would decide which direction your character goes. Would you become the ‘baddest bad guy’ like Razor Ramon or the ‘most electrifying man in sports entertainment’ just like The Rock?

You can perform everything you see in this trailer. The game is the best it has ever looked

Before we got hands on with the demo, a representative from 2K gave us the lowdown on what’s new in this game mode. What was awesome to hear from the presentation was that not one, but two developers had been working side-by-side to make, as was said, the best wrestling game ever. This was the tag-team of Visual Concepts, who have been a staple in the development of the NBA2K series, and Yukes, who are no doubt the perfect developers for  wrestling games as they have developed the most out of anyone. Combining these two teams together gives WWE2K15 the jolt it needs to stand out against the other recent titles in the series.

The developers had gone all the way around the USA tracking down superstars and legends of the industry as their likeness is taken for the game. Everything from Randy Orton’s Tattoos to Hulk Hogan’s moustache have been finely crafted around these amazing photos. They were also able to capture the superstar’s emotions and facial expressions so that they can be translated to the game as accurately as possible. Speaking of capturing, the team had created a motion capture facility in California with an authentic WWE ring so that they could get in the stars and record their moves in real time. The best way to translate a move from real life into a game is to get the master of that move to perform it. Whilst in this centre, sounds were also recorded to make them as realistic in the game. Everything from a bump to the canvas, a smash with a steel chair and a crash through a table.

As an added bonus to MyCareer mode, 2K Showcase will be including another single player mode for fans to enjoy. Similar to the Road to Wrestlemania mode, this will show off two iconic rivalries from wrestling’s past. These include the dramatic fallout and clash between Shawn Michaels and Triple H, including their epic confrontation at Summerslam 2002, as well as the Champion vs Champion feud between John Cena and CM Punk, one of the greatest storylines in recent history. The mode will also allow players to unlock unique attires, and more, as they progress through and complete iconic moments during the many matches.

Now on to the main event of the day; MyCareer mode. The mode itself is a vast improvement from the other titles as it now allows you to take a created wrestler and give him the journey of a lifetime. You begin the mode in the WWE Performance Centre whilst being managed by real life trainer, Bill DeMott. You work your way through the training until you are ready to show your skills on NXT, the stage for up and coming talent. Prove yourself and then you will be able to join the ranks of Raw and SmackDown as a part of the main roster. This right off the bat is a fantastic improvement, but we are only just at the tip of the iceberg.

Character creation has been improved upon greatly. When you first create your superstar you will have limited options with attire, moves, looks, etc., but as time passes and you gain more reputation, you can customise yourself with new clothes and even change your body type on the fly. The character you start with can completely evolve over time as you see fit. Whenever you do battle with other superstars you gain Superstar Points or SP. With the SP you can improve the attributes of your character. This can be anything from durability, stamina and even damage output, with many different choices to make as you progress. You will also gain Virtual Currency, or VC, that you can use to buy special OMG! moves, special in-ring abilities or entire movesets from the WWE roster.

The main emphasis in MyCareer mode is that how you play determines what your character will become. Performing tactics behind the referees back and cheating to win can result in you becoming a Heel (bad guy). However, if you put on great matches, respect the stars you go up against and overcome insane odds then you can turn into a Face (good guy). These decisions will also affect the rivalries and storylines that you will get involved in. At the event, the Heel character was in a rivalry with Daniel Brian while the Face character had to deal with the return of Brock Lesner after being attacked by him. These were only two examples of what could possibly happen, but as an added twist, your friends can also invade your shows. By importing your friend’s character into the roster, you can have full storylines with them as if they were anyone else. This makes your career mode more engaging and also gets your friends involved, wherever they may be.

With everything said and done with the presentation it was finally time to get hands on. The game was being played on PS4 and might I say, it was fantastic. At EGX I had problems with FPS drops and input lag but here it was non-existent. Every problem that was raised from earlier builds had been completely fixed. This now allowed the game to have fast paced tension, seamless transitions between moves and a beautiful graphical fidelity that is the best in the entire series. I can now fully recommend the game off of the looks and gameplay alone, but let us get back on track with some of the finer details of MyCareer.

After every match you will be given a rating out of five stars along with a title such as ‘Greatest of All Time’. What determines your rank are Back & Forth, Signature Touch, Memorable Moments, Height & Drama and Move Variety. These are all based around  your actions in the match and how long the match takes to complete. These all add up into a total match score that is then split into your SP and VC. You will also gain more and more followers as you perform in the ring, showing you how popular you truly are.

On the main menu of the game mode you will see iconic moments from the last month. These can vary from social network responses, title changes, PPV wins and best pictures from the best matches. From here you can navigate to your character customisation screen or simple jump back into the fight for another match. An interesting detail that I took note of was a Network Matchmaking banner in the top right corner of the screen. We know you can import your friends characters into your career, but does this mean you can actually combat against them during your journey?

The whole experience was a true spectacle to behold. It was great to play the Career mode before release and have a sneak peek of what it could have in store. Tie this together with a new original soundtrack ranging from Rock to Dubstep and you have yourself a game that combines the best of both worlds, with the classic fun and outrageous action of SmackDown Here Comes The Pain paired with the realism and technicality from WWE2K14. If you are a fan of wrestling, sports or any game that allows you to create yourself, you will fall in love with what this game has to offer. Not a wrestling fan? Then do not worry. The game will give you just as much fun and insight.

WWE2K15 comes out on Xbox 360 and PS3 October 31st, whilst the PS4 and Xbox One version will be released on November 21st. Pre-ordering the game will also give you the exclusive character Sting, with both his WCW Crow attire and old WWF colourful attire.

What do you think of WWE2K15 and the new MyCareer mode? Impressed with what the title has to offer? Let us know your thoughts in the comments below….IF YOU SMEEEELLLLLLLL WHAT THE ROCK…..IS…..COOKIN!