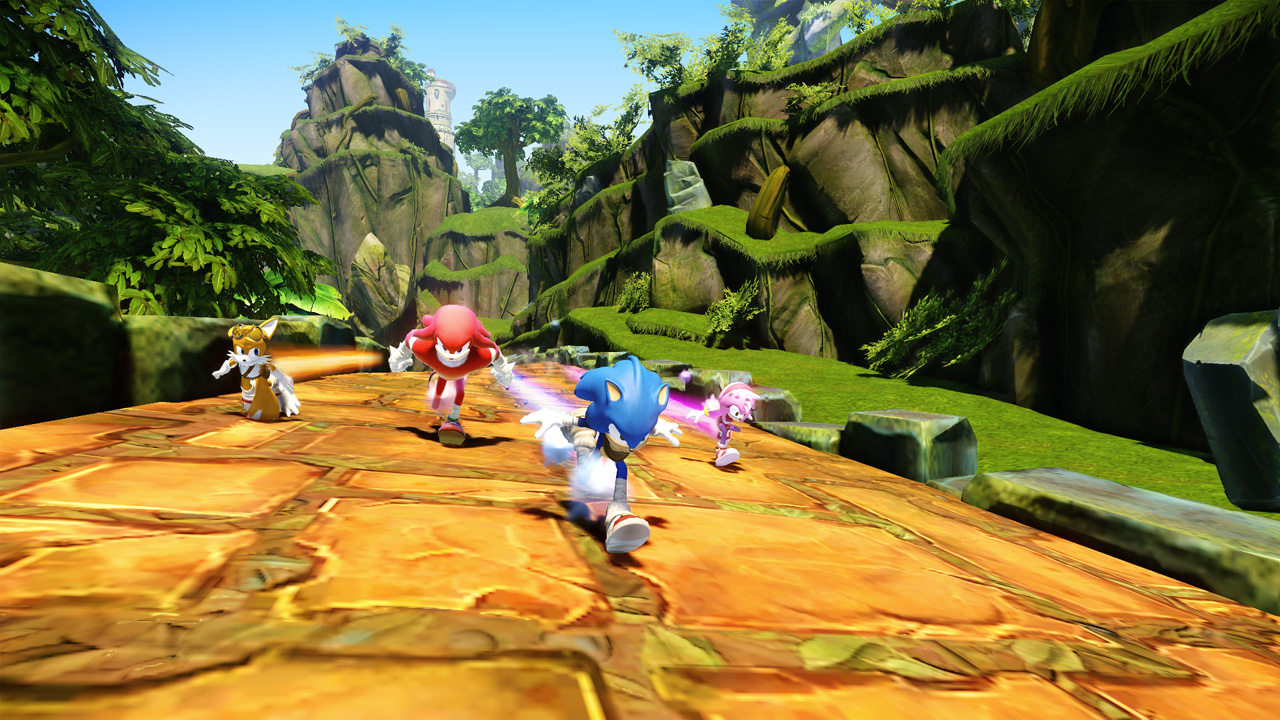 At the Nintendo booth during EGX 2014, Sonic Boom: Rise of Lyric was playable on Wii U, and we were able to get our hands on a demo of the blue blur’s latest outing. Developed by Big Red Button Entertainment, Sonic Boom: Rise of Lyric is a departure of sorts for the series, as the characters have been redesigned and gameplay has been changed dramatically to offer a more action-adventure style approach.

We played a level in which we were able to take control of Sonic and Amy and navigate an underwater industrial factory level complete with rivers of toxic waste. As mentioned,  Sonic Boom is very much an action adventure game,  more similar to the PS2 Prince of Persia games than a traditional Sonic platformer. Sonic and Amy could run around, albeit very slowly, and use the two attack buttons to beat on robots. Pressing A in different contexts would make use of the Enerbeam, a sort-of electric lasso that could pull switches and throw enemies.  There were platforms to navigate, secrets to find, and basic puzzles to solve.

Whether or not this is a thing that should exist is a debate for another time. From what we played, Sonic Boom looks like it will be a serviceable adaptation of the upcoming cartoon series of the same name. However, it is not a pure platformer like recent Sonic games have been, and fans looking for that kind of experience will be disappointed.

Now that we’ve got that out of the way, let’s talk about what was there. The level design featured branching paths catered for each character’s moveset and skills. Amy could go one way using her ability to balance on narrow beams and Sonic could go another (much quicker) way using his homing attacks. Sonic could also do a bounce attack, which sent him straight downwards very quickly. It bears mentioning that the homing attack is on the same button as the bounce attack. This meant that when I jumped toward a homing attack target and wasn’t precisely close enough for a homing attack to trigger, I pressed X maybe a millisecond too early and I killed myself by bounce-attacking into the green toxic ocean under me. This seems like an obvious oversight and is definitely something that the developers need to address before release if they’re to win gamers over. Why not make the homing attack button be the same as jump? It worked well in previous Sonic games, why not here?

The game will be split into running segments like this one as well as the action-heavy segments we played.

The fact that Amy could go one way and Sonic the other also seemed redundant as Sonic’s paths were always the quickest and easiest at any given time. Sure, if you wanted to you could switch over to Amy and play her Prince of Persia style platforming segments, but then again you could stay as Sonic and get as much done in 3 homing attacks and one third of the time. While it is definitely a good thing that multiple paths are available, in the case of this particular level the optimal route was so heavily weighted in favour of Sonic that you wonder if anyone would bother playing as Amy.

Perhaps in the full game there could be secrets to find on Amy’s path; it feels like the idea behind multiple paths is to provide variety and reward exploration, but Sonic’s path was just so much….better than Amy’s. Maybe in the full game there won’t be such a difference in quality between branches in the level design as there was here.

The demo level was also broken up with toward-the-camera chase segments in which a Guardian – an octopus-like robot – would chase Sonic and Amy down a tunnel.  These sections are strange in that Sonic and Amy will run automatically toward the camera, but to actually run fast enough not to be one-shot by the Guardian, you had to hold down on the stick.  It was extremely awkward to try and move Sonic left and right while holding the stick in the down position, but thankfully the Quick-Step move that featured in Sonic Generations returned here.

Sonic Boom: Rise of Lyric is difficult to look forward to. So far there’s nothing here that screams innovation or new ideas. The game is released on Wii U in November, and the developers still have a ways to go before there’s something truly special here. Hopefully they can make something worthwhile but so far we haven’t seen that from Sonic Boom.