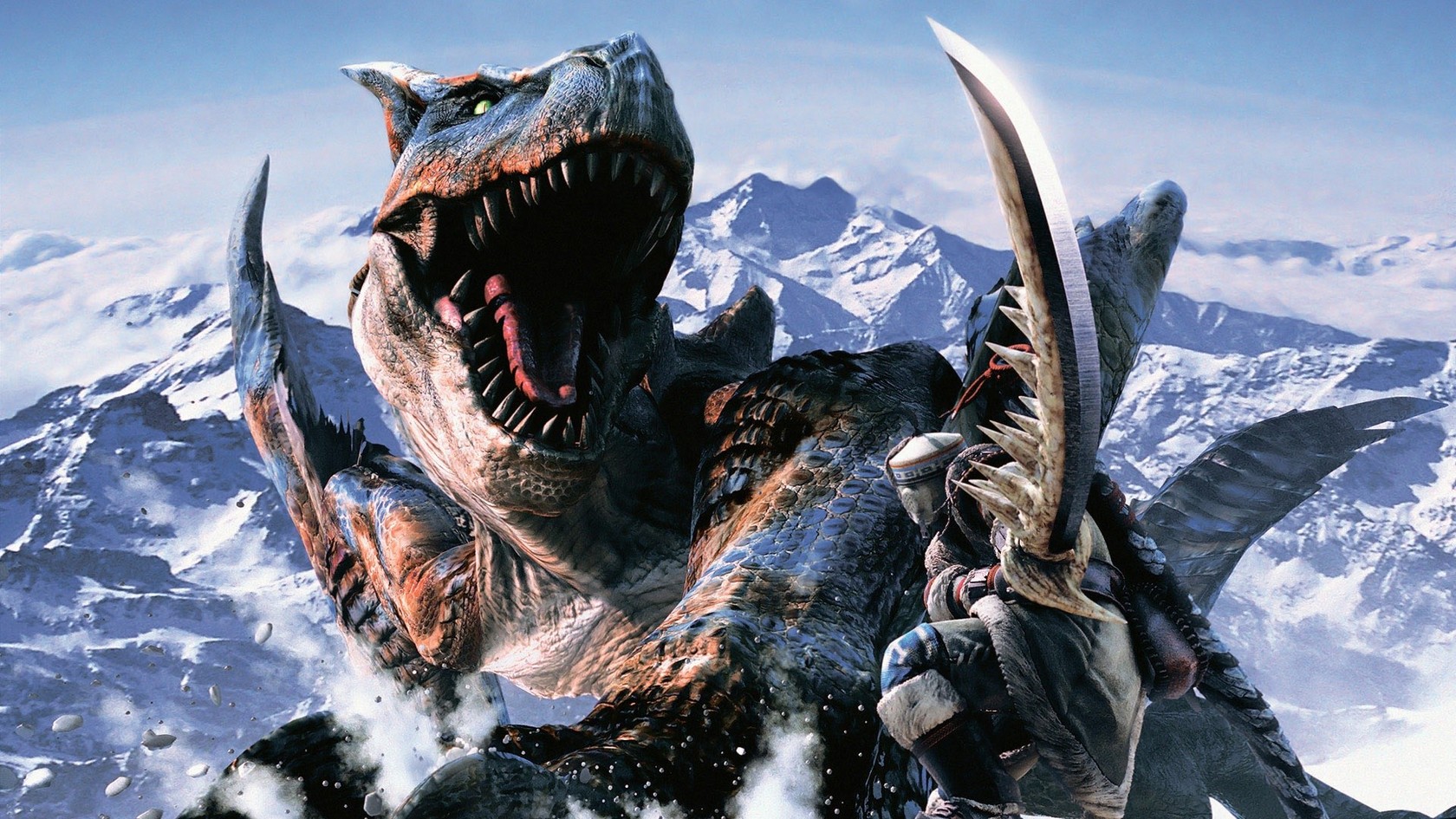 Monster Hunter is a game series that you simply have to play to believe. The bosses you face in this title are made to feel like hunting wild animals rather than fighting a super sized bad guy. This game is built around the idea of facing massively monstrous beasts to either continue the storyline or to gain new resources needed to upgrade your gear. With Monster Hunter 3 Ultimate having a big success on the Wii and 3DS, now we are graced with the arrival of 4 Ultimate. With new monsters, new weapons and new techniques, does the adventure feel as great as ever? Let the hunt begin!

In the four player co-op demo, there was a choice of three different hunts to go on. The team I was with all decided that we should take on the hardest one out of the three, newcomer to the series Tigerstripe Zamtrios. This giant lizard enemy has the ability to spit jets of water out from its mouth in a cone in front of hit, hitting players and causing the waterblight status. He can also suck in all the water he has and turn into a gigantic ball like creature. In this form he can roll around and even jump on top of you to cause massive damage.

Be very wary of this fatty

Before the hunt began however, the team and I had to choose what weapon class  we want to fight with. This was just for the demo; In the full release, there are no weapon classes and instead you are left to decide what weapons you want to create and hone your skills with. These can range from swords, axes and lances to bows, guns and gun lances. New additions this time round include the Charge Blade and Insect Glaive. The Charge Blade is a weapon that allows players to charge up very powerful attacks against their enemies, also possibly causing statuses. The Insect Glaive lets you control a bug at the same time as fighting with an acrobatic weapon.

So the hunt truly began and we headed out to find the Zamtrios. The first big change that I noticed is that transitions from one area to another in these vast maps are way faster than they were in the previous title. This helps you keep with your allies and get in and out of situations faster. As well as that, a new chat system is in the game allowing players to see when a team mate is in danger or someone is asking for you to go all out. To see the in game chat is great, this is helpful for if you are playing with a quiet team that just want to get on with a hunt.

The controls have not changed and still feel great. My favourite weapon from the previous game, the Gun Lance, is still as challenging as ever to master but amazingly satisfying. The art style is still nice to look at with vibrant and expansive areasand  great monster designs as per usual. Finally the difficulty is just as high as previous titles. If this is how hard Zamtrios is in mutliplayer I cannot wait to take it on solo. This may turn off any players that are not keen on very high difficulty curve games. But with the right team mates by your side, you can see yourself hunting down Deviljhos in no time.

Also looking forward to fighting some classic monsters, such as Rathian and Rathalos

Monster hunter 4 Ultimate might not have changed a whole lot from the previous game, but with the slight new additions to weapons, the new landscapes, new monsters and even the ability to climb and jump, the series feels better than ever. Definitely one of the biggest games to keep an eye out for on your 3DS library. Oh and in case you’re interested, my team did it! We slayed the mighty Tigerstripe Zamtrios with just five minutes to spare on the clock. A great adventure indeed, I cannot wait to get back into the world of Monster Hunter.

What do you think of Monster Hunter 4 Ultimate? Which monsters are you looking forward to hunting? Let us know your thoughts in the comments and don’t forget to keep an eye out for more of our EGX 2014 coverage.