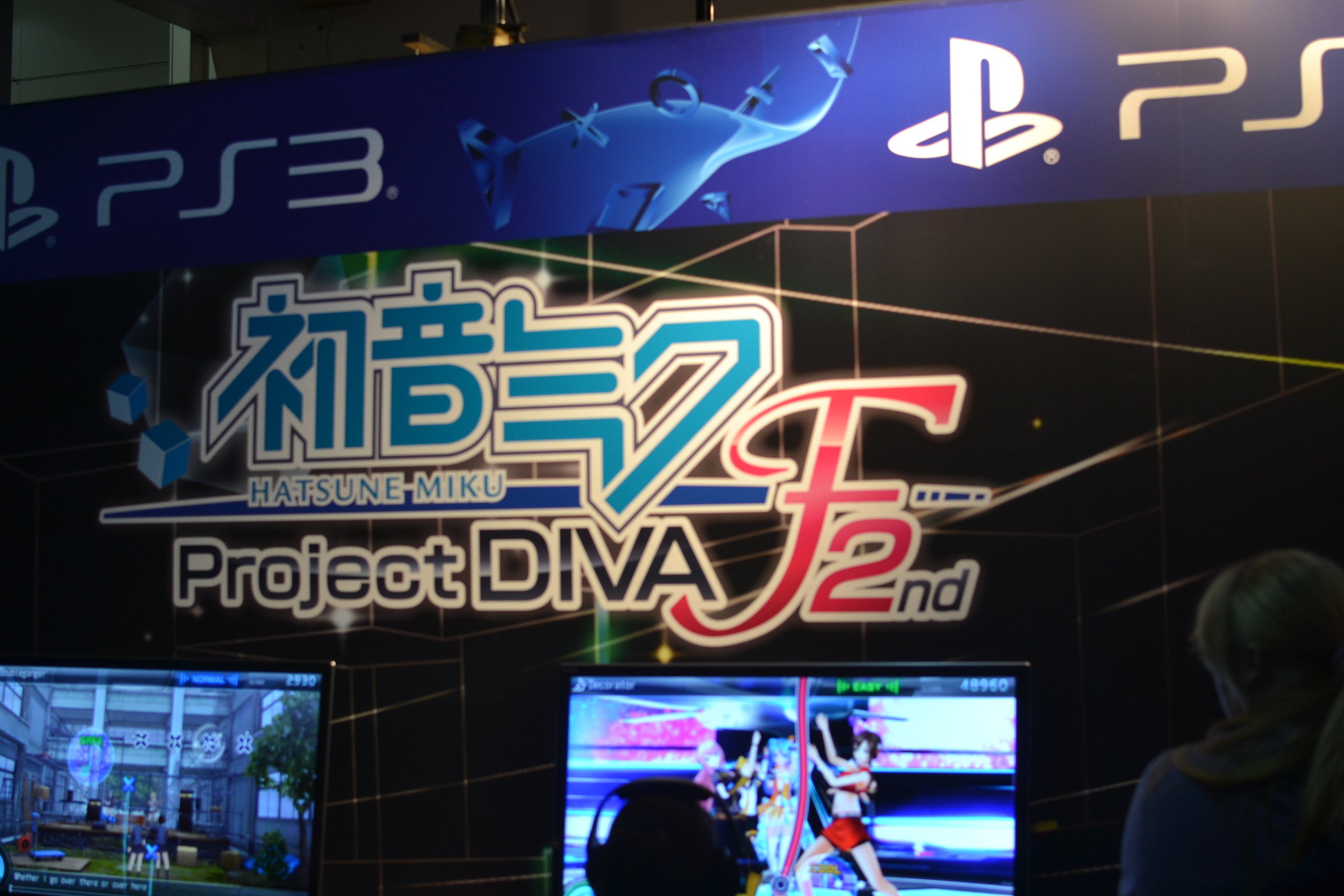 If there is one kind of game I grew up on most as a child, it was the rhythm games. These were the titles that got you off of your feet, onto a dance mat and had you going crazy to some killer beats. For the longest time I have been waiting to get my hands on the next level of Rhythm game, and at EGX 2014 my dream was realised. Hatsune Miku and her vocaloid friends have arrived to bring us a colourful, groovy and also challenging experience in the new title from SEGA, Project Diva F 2nd.

The game is a sequel from the successful Project Diva F on the PS Vita, only now it is also being released for the PS3. The demo came with three songs and three different difficulty levels, ranging from easy to hard. The difficulty doesn’t just add more prompts to time correctly but it also provides a larger range of different prompts to perform. With that said the controls are really simple as all you have to do is press the four face buttons in time with the music as they fly all over the screen. From time to time you will also have to press a directional button with them to keep the rhythm going. As an added challenge, there are also stars that will come up on screen. These can only be prompted with the flick of one of the thumb sticks. The special W stars show up regularly on harder difficulties or at the end of songs, and they require you to click in both sticks at the same time.

The songs are funky and the controls are solid. It is all down to your rhythm skills

So how challenging is the game? The answer; VERY. Even on the easiest difficulty you will be put through your paces as you try to keep an eye out on what is flying around on the screen. It also feels as if the dance routines happening in the background act as more of a hindrance to those playing the game, as you must keep your eyes on the button prompts. With that said, however, the animations and art direction of the game is beautiful; rivalling that of other anime style games such as the One Piece and Naruto series.

At the end of each song you will be given a ranking as well as a full breakdown of how well you did. When playing it on the show floor, I tried my best to get at least a half decent ranking. However the game thinks I have a long way to go until I am up to Hatsune’s standards. When you see the screen at the end it gives you the fire inside of you to go back and try again or even try out another song. What started off as a simple demo session, ended up being an hour of constant besting with a lot of fun and laughs in between.

There is but one question that is left behind after playing the game on a controller; would it be possible to play it with a dance mat or guitar peripheral instead? Of course on the Vita this may be a big hassle, but on the PS3 you can really immerse yourself in the rhythm more with the right equipment. There is no news from SEGA as to whether there will be any peripherals or support with this idea as of the games release, but it would only add to the experience in my view.

Want to see how hard the game can get? Here is me vs Luke on the hardest song with the hardest difficulty

With beats ranging from many genres, an anime art style that is colourful and vibrant, controls that are easy and challenging to master and a ton of fun to be had, Project Diva F 2nd is definitely a game to keep your eyes out for this November. Either take it on the go with the Vita or invite some friends over for a party on the PS3. Regardless you will have fun as you truly get down to the rhythm of the beat.

What do you think of Hatsune Miku Project diva F 2nd? Are you looking forward to party with the vocaloids? Let us know your thoughts in the comments and keep an eye out on the rest of our EGX 2014 coverage.