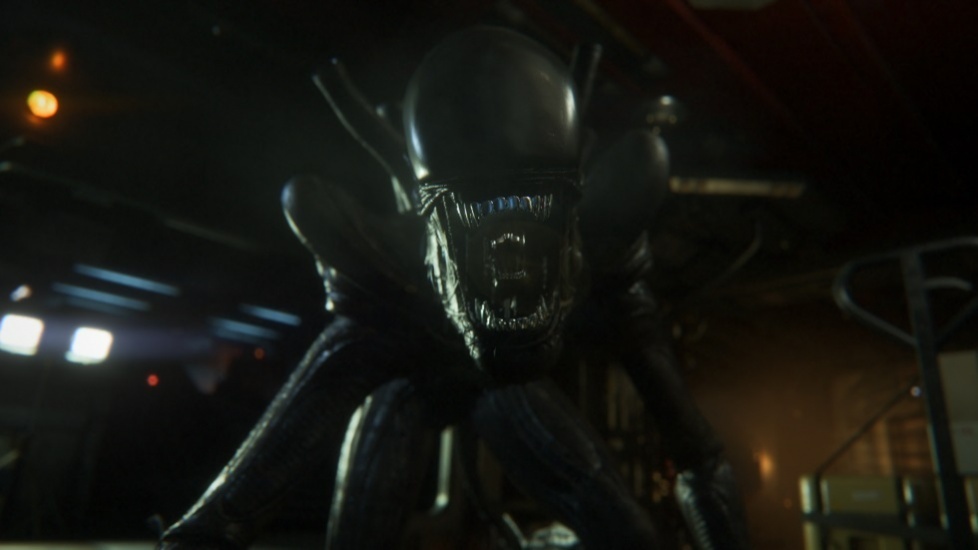 Alien: Isolation is almost upon us, but we managed to play a quick demo in London that took us through a Survival Mode challenge. Separate from the main game, we were put in the shoes of Amanda Ripley, given a goal to reach, a timer and a flamethrower, and sent out on our way.

Within seconds the fear set in. Entering the dark grey hallways of the Ridley Scott Alien-verse with only the footsteps of the titular Alien thundering into your ears is an intense experience, and there is clear evidence that Creative Assembly are trying to add to and improve upon the horror conventions established in Amnesia and Slender.

Take for example the tried-and-true locker hiding scenario. In most horror games, you simply wait in the locker for your enemy to leave, but in Alien there are a few mechanics which add to the tension greatly. When you’re in the locker and the xenomorph comes to investigate, you’re prompted to hold L2 which makes Amanda hold her breath. After a few seconds, the alien is still staring right at you through the bars, and you have to pull back on the analog stick. At this point the screen is flashing red as Amanda starts suffocating, and with the creature now staring you down, real tension finds you as it finally moves on, allowing you to let go and exhale (both in-game and in real life).

The motion tracker from the first Alien film and its crude representation of your surroundings is also the perfect fit for a horror video game. Holding R1 brings up the tracker (there was a bonus objective which was to complete the mission without using it), which has a limited battery life, so the idea that it could run out at any moment was always with me during the playthrough. The screen’s depth-of-field effects take over when you hold up the tracker, blurring everything on screen but it. This simultaneously draws your attention to the tracker and makes it so that you can’t just constantly use it. This limitation falls perfectly in line with the horror theme as the odds are stacked against you, allowing only brief glimpses of the tracker.

Turning a corner to see something like this is filled with tension. Then of course it turns around gives chase.

Seeing the blinking light on the screen but nothing in front of you terrified the Nostromo crew, and to experience the fear that those characters went through is an amazing thing. Alien: Isolation also captured its namesake very well, as isolation is exactly what you feel when exploring the cold corridors of the game.

The sheer level of unease and anxiety you get when playing Alien: Isolation is through the roof. Even in the brief challenge we played, there were some hair-raising moments that emerged naturally from the mechanics and level design, as opposed to being scripted. Once, when the alien spotted me, I naturally turned tail and ran, but the panic was too great and I lost all sense of spacial perception. I ran through a door, then through another (both of which had the genius inclusion of a 1-second opening time for maximum panic), then through another… until I opened one more door and there it was; staring me right in the face. Game over, man. Game over.

Sound played a big part in the creating the atmosphere. There was in fact very little in the way of sound, save for the ambience of the space station, but when the alien was near, screeching violins and the sound of its breathing and footsteps combined to truly unsettling effect. Even when the xenomorph wasn’t on screen it had presence due to a combination the sound design and motion tracker. This achieves the same thing the movie did: making the monster scary even when it wasn’t seen.

Use of the flamethrower managed to get of the alien to disappear for a bit, but not from the motion tracker. Using the ventilation to escape, it’s still around up there, somewhere, so you still have to vacate the area and move on or hide before it shows up again. Crucially, it was unkillable. Alien: Isolation lives or dies by its ability to keep the tension high and the scares potent, but not necessarily frequent. Being able to kill the alien would cheapen this idea, and it’s commendable that the developers are pitting you against an invincible enemy, simply tasking you to survive.

Alien: Isolation is so far looking like the best Alien game we’ve ever seen. An emphasis on horror, and of de-powering the player as opposed to empowering them, allows Isolation to reach levels of fear that could be a huge leap forward – not just in the genre, but in how immersed you can become in videogames. With the release right around the corner, stay tuned for our full review for the verdict on Alien: Isolation.