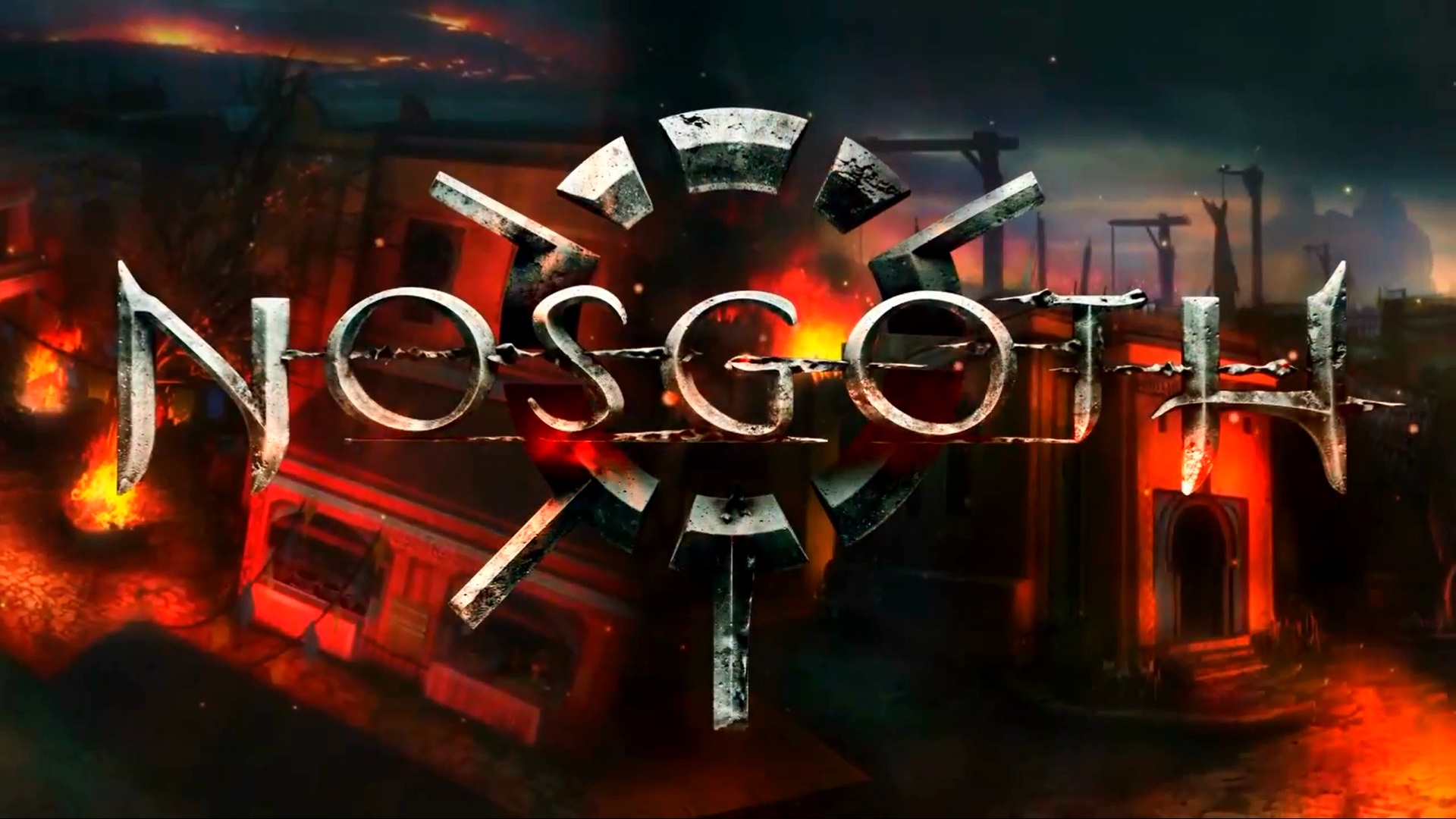 Nosgoth is soon to be a free to play title that is currently in development, and available for early access. Focusing on Vampires vs Humans, Nosgoth brings multiplayer combat to a new level.

I pounce across the map, passing three humans and landing on their trailing companion. As my enemy lies pinned to the floor with me tearing shreds out of him, I hear him screaming in agony. I hop backwards off the poor fool only to see my fellow vampiric team mate swoop down and grab him before he even has a chance to right himself after my assault. As the two of them soar into the air, I hear the words “Ready for the fall of mankind?” In a deep gravelly voice, before watching our human prey fall to the floor with a bone crunching thud. He didn’t survive the encounter, so of course I run over to him, grab his limp corpse by the leg and drag him into the shadows to drink his blood and thus redeem my health.

This is Nosgoth, an insanely tense and visceral look into the “Kain” series. Those who don’t remember, or even worse, know the Soul Reaver games, or their counterparts, will have no trouble getting into this spiritual successor though. It glazes over story line and jumps straight into heart pounding action. As you may have figured from above, Nosgoth centres around two teams of 4 fighting it out. One team is the highly powerful and agile vampires, whilst the other is the heavy loaded and well geared humans.

Humans must work as a unit if they are to survive. There is no place for lone soldiers in Nosgoth. It is not impossible to beat vampires on your own, but chances are they will overwhelm you long before you can finish even one of them off. The power of humans comes from their mixture of range and heavy fire. To really excel you need a coordinated team, or at the very least a team that stick close together. Vampires have a lot of abilities that will stun or debilitate, and in those seconds of vulnerability, if you don’t have allies nearby, then it is pretty much game over.

With four classes to pick from (at this point) on both sides, there is plenty of styles for every player.
Hunters are automatic crossbow wielding Van Helsing wannabes. Using a mixture of mid-range fire power, a disarming bolas attack that bind vampires arms to their sides momentarily, and a volley of 3 impact grenades. They are a great starting class, and one of the two default humans available from the get go. The other starting class is the Alchemist, a grenade launching potion master who uses flash bangs to blind the vampires, and walls of fire to deter them from chasing you. For the other two human classes, you must level up in multiples of 5 to gain Artefacts, the key to unlocking any class of your choice. Being fonder of the vampire gameplay, I chose to use my first Artefact on a new vampire class, but once I got to level 10, I quickly unlocked the Scout class after seeing others utilizing his skills. Starting with a bow and arrow that you can charge up shots with for extra damage, the Scout is definitely the longest range human. The charged shots also zoom in the longer you charge it, allowing for complete precision, even when your enemy is scaling a wall on the other side of the map. To complement the bow and arrow, Scouts start out with an area of effect arrow volley attack that rains arrows from the sky, and a triple throwing knife attack that interrupts the vampires advance. Lastly is the Prophet, a magic type class that can steal life from the vampires, disable their attacks, and dual wields a couple of 6-barrelled pistols.

For the vampires, the first of the two default classes are the Reaver, a class that can bound across the map with it’s pounce ability, which also pins enemies to floor a deals a fair amount of damage (think of the Hunter from the Left 4 Dead series, only the Reaver jumps off after a couple of hits). He is also equipped with a thick fog grenade that disorients and blinds the humans, and finally an ability much like bullet dodging from The Matrix, in which the Reaver swiftly moves out of the way of bolts, bullets and arrows. The second default class is the Tyrant, a huge tank-like beast of a vampire. Using his own body mass and a charge ability to run into battle, he knocks down any human unfortunate to stand in the way which is a great way of splitting a unit of Humans. He also has a ground slam attack that does AOE damage with more damage dealt the closer you stand to him, and a skill that hardens his skin and negates the majority of damage to aid his escape. The two unlockable classes, with the use of Artefacts, are the Deceiver and the Sentinel. The Deceiver is a sneaky vampire that uses invisibility, illusionary copies of itself and lastly a powerful backstab attack that deals extra damage when dealt from behind. The Sentinel is my favourite part of the game altogether so far. Using a swoop and grab ability allows you to steal humans from the comfort of the earth, dragging them way up into the sky only to drop them to the floor, which I then like to follow up with the corkscrew type attack that does AOE damage. I then finish off the poor mortal with a wing flap that sends any enemies, in front of it, flying backward.

All the attacks and skills mentioned are just the basic defaults, and each attack, or weapon can be swapped out for whatever suits your preferred play style. With the humans, their weapons can be changed for stronger or fast firing versions that will often have a unique twist on them. Vampires will have alternate versions of their attacks, or completely fresh ones. For example the Tyrants charge attack can be swapped for a jump attack that lets you leap across the map, or the Scout can switch out his AOE volley of arrows for a grappling hook that allows him to scale certain structures, giving him a snipers advantage.

There is a lot of discussion about balance when it comes to Nosgoth. Some players I have encountered believe that Vampires are over powered. This is technically true, but not if humans band together. The idea behind the gameplay is that the two different races, humans and vampires, are meant to be used in different ways. Vampires will usually have an advantage in 1 on 1 circumstances, but if 3 or 4 humans are firing on a vampire at the same time, he can be dropped within seconds. Knowing that each race requires a different tactic is vastly important to your success. Even though it may seem obvious to many players, I always started my human rounds with a quick team message telling my fellow homo-sapiens to stick close, as too often a lose canon would run of and subsequently become vampire chow. With all this being said, teamwork is still a vital part of winning as a vampire, though not to such an extreme degree. If an enemy team of humans is well coordinated, the typical run in and slash ’em tactic will more than likely fail. Using the vampires skills in conjunction with the others is amazingly effective, and scattering the humans is the ultimate goal. One of the best tactics I had seen was one that required at least 3 of the 4 vampiric classes.

To start off a Reaver throws in his smoke grenade to blind or at least distract the humans then crouches low, ready to pounce when the time is right. Whilst the smoke has the enemies vulnerable, a Tyrant will charge in and a Sentinel will swoop down and grab one of the disorientated humans. With any luck the charge from the Tyrant will knock a couple of the remaining humans down, while the Sentinel will remove another one and proceed to do the flurry of attacks mentioned above. A Reaver will then leap and pin one of the remaining humans while the remaining two humans will be finished off in some brutal way by the other two vampire. It takes a little coordination, but it is highly effective when things go your way. This hopefully shows the way that tactics can be bent to work for your own situation. With a huge array of moves, it gives you a lot of ways to explore the best way to take down your enemies.

The same can be applied to humans, with each having their own particular strengths. With a clever combination of the longest range and shortest, you could easily build a team that will prevent the vampires from ever getting close to you.

In team based games, it is important to have a way of bettering your play styles, and Nosgoth is a game that offers enough diversity with it’s attacks and skills, that straight from your first match, you will probably start thinking of amazing ways to compliment your teams advances.

Even though Nosgoth is still in beta, it is already shaping up to become a widely popular team based game. With a tenseness that matches The Last Of Us multiplayer, fun game play that is similar to Left 4 Dead’s online versus, and the competitive prowess that lives up to Counter Strike’s well defined team combat, Nosgoth is certainly a game that I will be playing for a while. It is also worth noting that it will eventually be free to play, so if you aren’t willing to pay the price to support the game at this point, you will hopefully soon be able to try it for yourself.