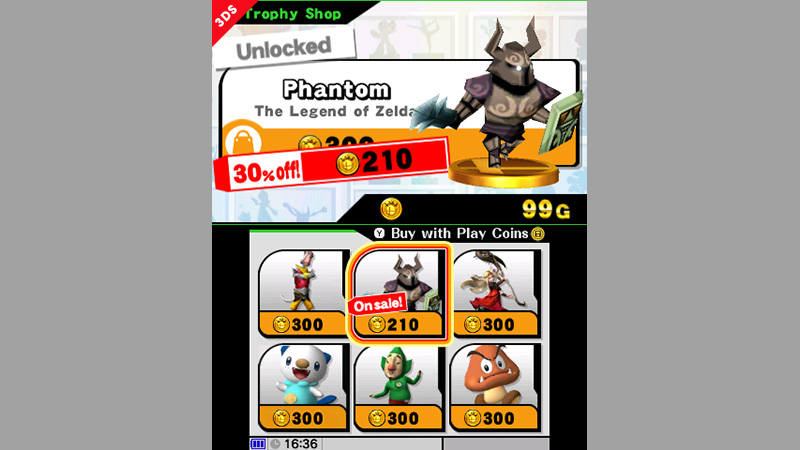 Super Smash Bros. Director Masahiro Sakurai announced via the Miiverse this week that collectible trophies will be purchasable for Play Coins on the 3DS. Play Coins are the console currency of the 3DS, with one coin gifted to players for every 100 steps recorded on the 3DS pedometer, and a limit of 10 coins awarded per day.

Sakurai revealed, “Here’s something new–the trophy shop. If you’re having a hard time getting certain trophies, why not just buy them?” He also added that trophies will sometimes go on sale, so if you just can’t rack up enough steps on your handheld you can always hold out for a bargain.

Trophies have been collectible in Super Smash Bros. games since the beginning, rewarding the player for finishing game modes with specific characters, completing challenges, or finding them during gameplay. Other versions of the game have also included the Trophy Lottery, allowing you to spend in-game coins for a random reward, so buying trophies isn’t that new an idea. While the screenshot above implies that in-game coins will also be used in the trophy shop, it seems that Nintendo just want to encourage us all to be healthy and go for a little walk. Or, you know, erratically shake the 3DS for a while.

Super Smash Bros. 3DS will hit stores on October 3rd, with a Wii U version scheduled to follow later in the year.