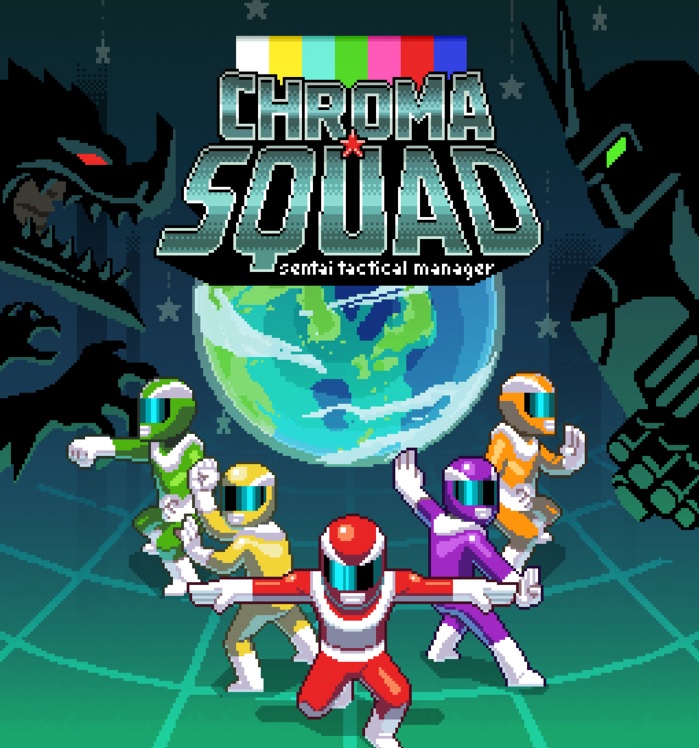 Did you ever want to be a Power Ranger as a kid but you didn’t have the attitude or the megazord to do it? Well, with Chroma Squad, you can finally fulfil your dream of being in your own super sentai show as you hire actors, work out budgets and occasionally get into giant mech fights. Trust me, even the budget stuff is fun.

The best way to describe Chroma Squad is if you smash the base management aspect of XCOM with the tactical combat of a game like Fire Emblem then sprinkle in Power Rangers, Kamen Rider and other sentai shows. As the game tasks you with being the manager and director of a TV studio, all the missions are actually episodes for the show you are making, as shown by the cast dialogue where they talk about the editing of the episodes, the fact that they may have a dentist appointment to go to after filming or even missing cues and warping into battle late. The game’s meta humour seeps into many aspects of its design, with the mission success screen having people tweeting about how much they loved the last episode you made or you having to deal with angry fan emails or spam in between buying new lights or healthcare for your actors. If you aren’t a fan of that sort of humour, the writing will grate on you after a while and even if you are, some jokes overstay their welcome and don’t quite hit the mark.

Chroma Squad is split into two phases, the Management Phase and then the actual recording of episodes. The recordings is where you’ll spend most of your time, engaging in turn based, grid combat with your team while the rest of the time will be spent buying new costumes, checking your marketing and upgrading your studio. The Management Phase is quite fun, relying on you to spend not only cash you have made from episode revenue, but fan power to gain upgrades like more powerful special moves or accessing better equipment. New mechanics like the game’s crafting system which allows you to break down old equipment into reagents for new stuff or improving on current equipment is quite satisfying and has a surprising level of depth, even in this beta stage. The main problem I have at the moment is that some elements of this part of the game lack content. The Shop seems incredibly empty at this point in time, only allowing you to buy two weapons and limited new equipment, and the game also seems to lack healing items, which becomes a major problem when you go into battle.

The VGU team looks a bit different to usual.

Combat in Chroma Squad handles like most grid based SRPGs. You get two actions for each character, and they can move, attack or do a special move as well as go into a teamwork stance, which is one of Chroma Squad’s big mechanics. By putting a squad member into teamwork mode, you can do a variety of things like use them as a way to fling characters further on the grid, have them help out on a normal attack to do extra damage or help out with certain special moves. It is a cool concept and allows for unique strategic options, as you manage whether to cash out your teamwork stance on a single attack, or you chain multiple squad members together to do a super powerful attack. It can be a bit fiddly sometimes in terms of characters not engaging in teamwork attacks when they are right next to fellow squad members but I imagine this will be fixed in the full game.

The other main mechanics Chroma Squad has are the Audience Meter and the ability to ‘Chromatize’ mid-fight. The audience meter acts as a sort of EXP bar, growing as you perform certain moves and fulfilling tasks within the mission called ‘Director Instructions.’ If you get the Audience Meter to a certain point, you gain the ability to turn into the Chroma Squad, giving you access to all your extra skills and healing you up to full health. In addition, you cash out your Audience Meter at the end of every episode, giving you money and fans depending on how full your meter is. This creates an interesting balancing act between you figuring out whether to focus on extra tasks to gain more money but take more damage, or just focus on the main mission and finishing the episode. Besides the normal grid based combat, you also have mecha fights which act more like turned based battles in RPGs, where you have a set list of commands which you can combo together to do more damage, but the likelihood of an attack landing gets lower if you go for a long combo. They result in fun boss battles though you only really get them at the end of every season of episodes.

While all the new ideas put forward in Chroma Squad are really good, it needs to work on basic commands and game balance. As mentioned earlier, the beta does not have healing items and you don’t gain access to moves that can heal you either, which makes even the first mission in the beta a struggle to complete. Enemies can hit really hard and the fact you have no way to heal in battle, besides Chromatizing (which you can only do once per mission) makes some missions harder than they should be. In addition to that, characters lack a defend command which seems a weird omission, as well as the ability to end a turn instantly.

Even though the game is in beta, there are some glaring glitches like characters getting knocked out but still being in an alive animation, or Director Instructions or even mission objectives not triggering when you fulfill the requirements. Plus, the ticker at the bottom of the screen telling you stuff like how much SP someone has regained or the audience bonus when someone does a move is quite distracting and just clutters the screen. This may just be for me but I would also like a better visual indicator of each class, rather than just a little icon next to their name. Maybe having their costume design slightly different or showing their equipped weapon would help, just as players get used to the colouring of their own sentai teams.

Besides those problems, Chroma Squad is shaping up to be an excellent SRPG with a lot of character and some interesting battle mechanics. Just a little bit of polish on the basic mechanics and some important bug fixes will make this a new favourite strategy game. Let’s hope the game stays as action packed and fun as its roots, when it releases later this year.