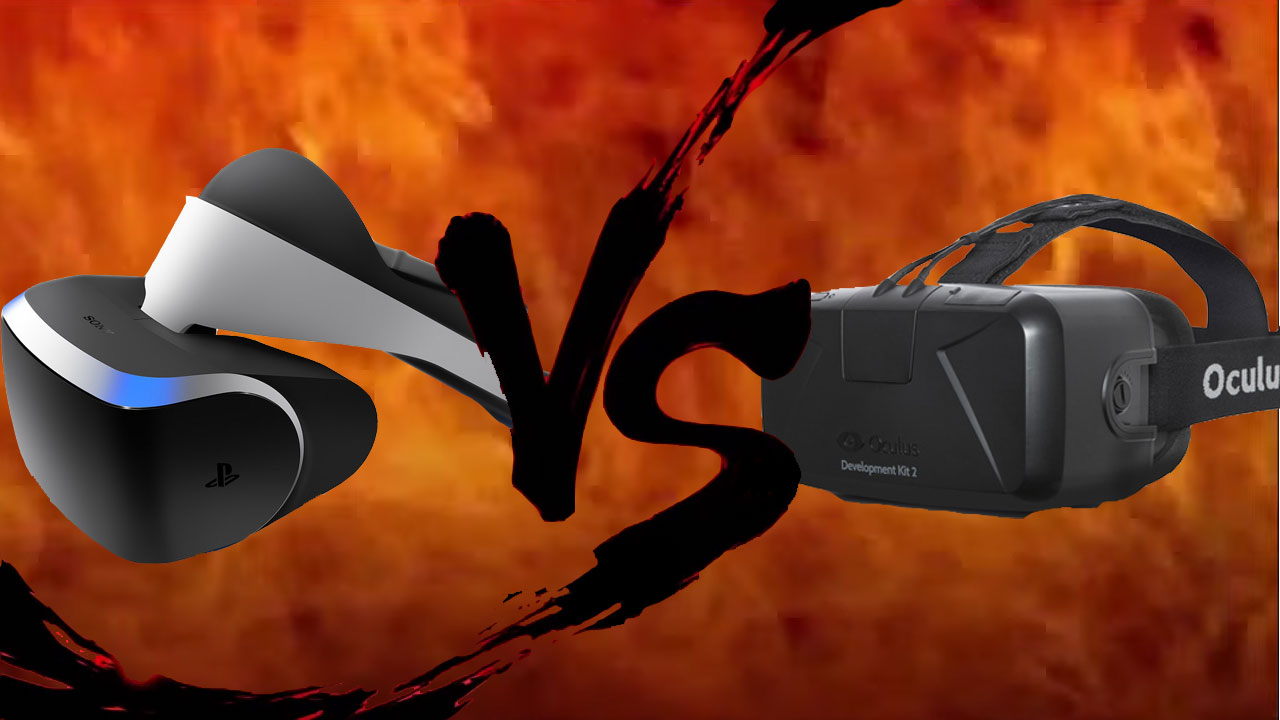 VR is looming on the horizon, and like an unavoidable dental appointment it’ll either be a painfully long process or a surprisingly easy time.

For the longest time, the Oculus Rift has been the golden child of the VR movement. Ever since its ludicrously successful Kickstarter campaign, the Rift has been turning heads every time it makes itself known. While a mass-produced consumer version of the Rift is still a distant dream, it’s a very exciting time for VR fans, and what’s more is that they’ll have more than one device to choose from.

Enter Sony, who have their own VR hardware in the works. Called Project Morpheus (for now), It’s a PS4-exclusive piece of kit that so far appears to offer the same functionality as the Rift.  The stage is set for a marketplace battle that could rival the launch of the PS4 and Xbox One last year, and eyes are on Sony and Oculus to deliver on our expectations. But who will come out on top?

Both devices will come equipped with the same basic features. Both will let players enter a virtual world by wearing a head-mounted display and viewing it through stereoscopic lenses in front of each eye. Accelerometers allow the image on the screen to update when the player moves their head, achieving the illusion of being inside a virtual world. Both devices will feature positional tracking too, meaning the game will know where you are as well what direction you’re facing.

The Oculus Rift has been the most popular VR device ever since the devkits were first being produced. Since many developers are already aware of the technology due to the kits having been around for a while now, many of the device’s quirks have been figured out, and the next version of the hardware is on its way thanks to Oculus, which means that Oculus could be ahead of Sony in terms of hardware as well as adoption. Oculus is also currently compatible with PC’s, and CEO Palmer Luckey’s goal is for the device to be as cheap as possible.

The Oculus Rift is more well-known, and developers are preparing for the release of the second version of the developer kit

Much has still to be revealed about Sony’s enigmatic VR device, the tentatively-titled Project Morpheus. It stands to reason that it will only be compatible with Sony devices, meaning the multi-console gamer might have to consider carefully (however it’s very possible that the Morpheus device could work with PCs in the way that the Dual Shock 4 does).

Morpheus uses the PlayStation Camera for its positional tracking. The PlayStation Camera can see the Morpheus due to the light emitted from the device, and this means that the position as well as the orientation of the user’s head can be tracked. In the demo Sony showed at the Develop Conference recently, users took part in a tech demo in which they looked through the eyes of a deep sea diver in a shark cage. When the user bended their knees, they could look down and see their in-game character’s knees bend too.

Sony’s entry into the VR market would do well to aim squarely at the gamers, and at the massive install base on the PS4.

Of course this could mean that the Morpheus would require users to purchase the PlayStation Camera, which would be a questionable move on Sony’s part, seeing as the cost of Sony’s VR experience would then incur the Camera too, which ironically puts them in the same position as Microsoft in 2013, where they stand to lose out on potential customers due to a price gap caused by extra hardware.

If the Morpheus requires the Camera, then two SKUs would need to be made available, one with just the headset and another which bundles the Camera with the Morpheus, making the upgrade to VR for a lot of PS4 users a steep price, similar to the Move bundles we saw five years ago.

Oculus Rift is likely to be the cheaper option because of this, and its compatibility with existing tech makes it an enticing deal for developers. The Rift integrates itself into engines such as Unity, Unreal 4 and UDK, making it more accessible to developers (technically you can order a devkit right now from Oculus’ website).

One of the most important things that developers have discovered since the technology has become popular is the importance of latency and frame rates. If you’re playing a game on a VR device and a drop in framerate causes your head’s movement to no longer match the image you see on screen, motion sickness can become an issue.  It’s generally agreed that having a high frame-rate in the game is crucial, which means that developers may be more likely to make sacrifices in order to hit that locked 60fps mark. As a gamer that will always prefer framerate to graphics, the idea of a future in which more PS4 games are more likely to be a locked 60fps in order to hit a Morpheus requirement is a very exciting prospect to me.

Non-traditional input systems have been around since before the Wii, and the motion control boom of several years ago is looked back on as a fad, due to the perceived lack of success of the PlayStation Move and the Kinect. There is every possibility that the VR race could become another case of the motion control we saw back then – a short-term period of success followed by a quick death.

Hopefully, this won’t be the case with VR. VR can succeed where motion control failed because motion control in the way that we knew it can only do so much. VR is the chance to trick your brain into thinking it is battling aliens or sword-fighting with pirates far more than any PC or games console ever has, and hopefully VR will represent an explosion in the games industry that continues for many years.

In terms of marketing, Oculus is now owned by Facebook, and will likely have the edge in the marketplace due to possibly pushing the device as not just for gaming, while Sony’s position will be far more game-focused. As for which device comes out as the victor, that is decided by the same thing it always has: the marketplace.  Compatibility between devices is one of the most important things, but if one device is noticeably more expensive than the other, then the cheaper of the two options will win. I predict that the Rift will be the cheaper option, and will be more popular as non-gamers adopt the device for a multitude of purposes, not just for gaming. The Morpheus + PS4 combo is likely to see exclusive VR experiences which Sony will push (e.g. a Naughty Dog-developed VR game will only happen on PS4).

The stage is set for another battle for consumer’s cash, and it is driven by a need to innovate far more than the motion control technology was, which makes 2015 an exciting year, as the promises we’ve seen from Oculus and Sony look like they’re going to be delivered.