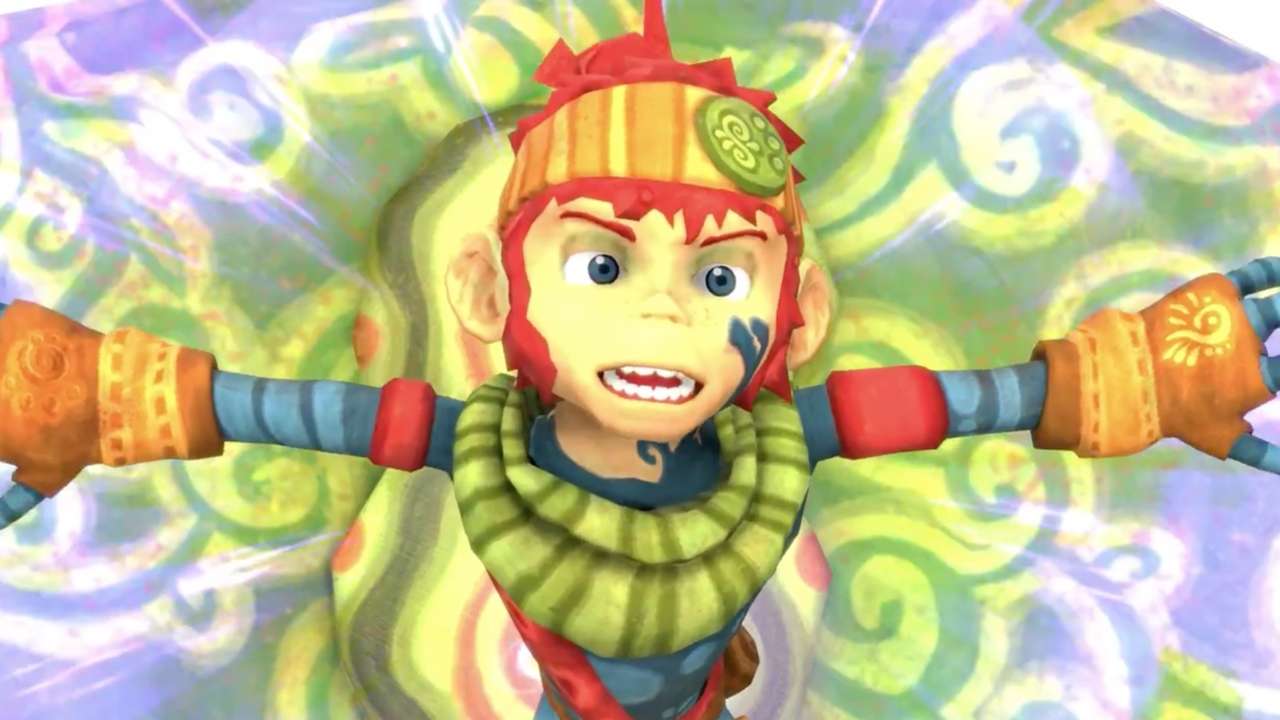 Many games these days try to be as realistic as they can, which some would say is straying from the roots of video game design. Look back fifteen or so years to the era of 3D platformers and you will find a whole host of lovable characters and thus games. One of the things that gave games like Spyro The Dragon or Super Mario 64 their flair, was the worlds they resided in. Mimimi Productions aim to deliver such a world. The Last Tinker: City of Colors offers its players a vibrant and exciting game to explore.

You play as a Tinker named Koru (I suppose he may be the last one) who appears to be renowned amongst the inhabitants of the city. Many of the people thank him for fixing this or that, as the premise of the story is that anything can be built from paper, glue and colour if the idea behind it is strong enough. Set during a war between colours, in districts based on each individual hue, only the Outer District is getting along despite their inhabitants’ colour. Koru must unite the colours to fight the Bleakness, an ominous force that is draining the colour from Tinkerworld.

As you may have figured out by now, the game seems to have a moral to teach, which lends itself well to the all ages friendly style of The Last Tinker. Everything feels very intuitive and it’s very easy to pick up and play. You are taught things on the fly as you progress through the story and if you do run into trouble, you aren’t alone. Much like Navi or Sparx, you have a helpful floating sidekick named Tap. He is there for the exchange of dialogue (as Koru appears to be the strong silent type), or to guide you in the right direction should you become lost. As well as having a guide should you need him, the game does everything it can to make the starting levels, which are technically tutorial stages, simple to navigate. Take the combat for example, it works by simply pressing the attack button, but add a dodge here or a punch there and it makes for very quick-paced, yet easy fighting.

The entire feeling behind The Last Tinker is one of both nostalgia and wonder. Every aspect of the environment has been beautifully rendered in a charming way. Even the sun gives you a smile as you pass, and while you do have gangs of angry Reds that want to fight you, there is a quiet confidence in Koru that encourages the player to continue their adventure. Not all colours are out for a fight, however, as each colour lends itself to an emotion that can be used in the game, for example red aggravates, whilst green frightens. Though I didn’t get to explore these powers in the preview I played, it did tease with a couple of upgrades for the protagonist.

Whilst playing, I couldn’t help but notice certain elements that appeared to have been inspired by other great titles. Rails for travelling along feature throughout the game, reminiscent of Sonic Adventure 2, while some movement is similar to the intuitive free running of the Assassins Creed series. These features add a lot to the energy of the game and when placed alongside the incredibly bright and strong colours of the environments, they make for an enthralling experience.

The Last Tinker: City of Colors offers a beautiful world for all ages to enjoy. There is a difficulty choice ranging from kids mode to instant death, bringing a real challenge to any who find it too easy. The characters are witty and friendly, and while they do make various noises such as grunting or squeaking, they are far from annoying as some other video game characters can be. With some very enticing and easy to understand mechanics, The Last Tinker breathes colour and life back to the 3D platformer genre that many may have assumed dead.

The Last Tinker: City of Colors is due to be available on PC, Mac Linux through Steam, and on consoles in the Summer of 2014