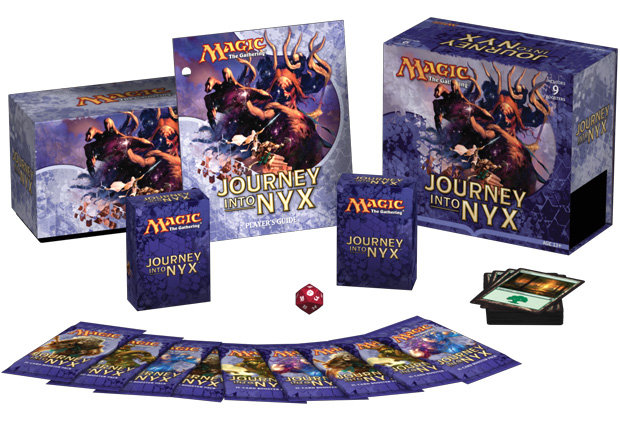 Can’t wait for Journey to Nyx? Well, here is a little taster of what’s to come. Wizards of the Coast have revealed the packaging art for the products to be released for the next set in the current block. These products include the set itself, the Intro Packs, the Fat Pack, and the Event Deck.

With the pre-release vastly approaching on the 26th – 27th April with the official release on the 2nd May, Journey to Nyx will be the last set in the Theros block. The set has taken players on a wild journey encountering massive monsters and the gods themselves. And this set is no different with 165 cards to its name.

Accompanying the set will be the Intro Packs and the Fat Pack. As in true MtG fashion, there will be 5 decks each with their own theme. For this set, there will be a deck for each of the colours which are ofcourse White, Blue, Black, Red, and Green. In the featured images you can see the cover cards of which will play a part in the deck. As for the Fat Pack, the standard issue of 9 packs of the set, a visual catalogue of the cards, 2 set themed deck boxes, an 80 card land basic land pack, a special edition life counter, and the Journey to Nyx card box.

Lastly, the Event Deck has been announced for this set. As seen in the image, it will be a Blue and Red Event Deck that will contain a full 60 card deck complete with a 15 card side deck. However, this deck will be talked about more on the 1st May 2014.

So there you have it. Are you excited yet because we are? Please head on over to the official Wizards of the Coast website for more details. Game well.