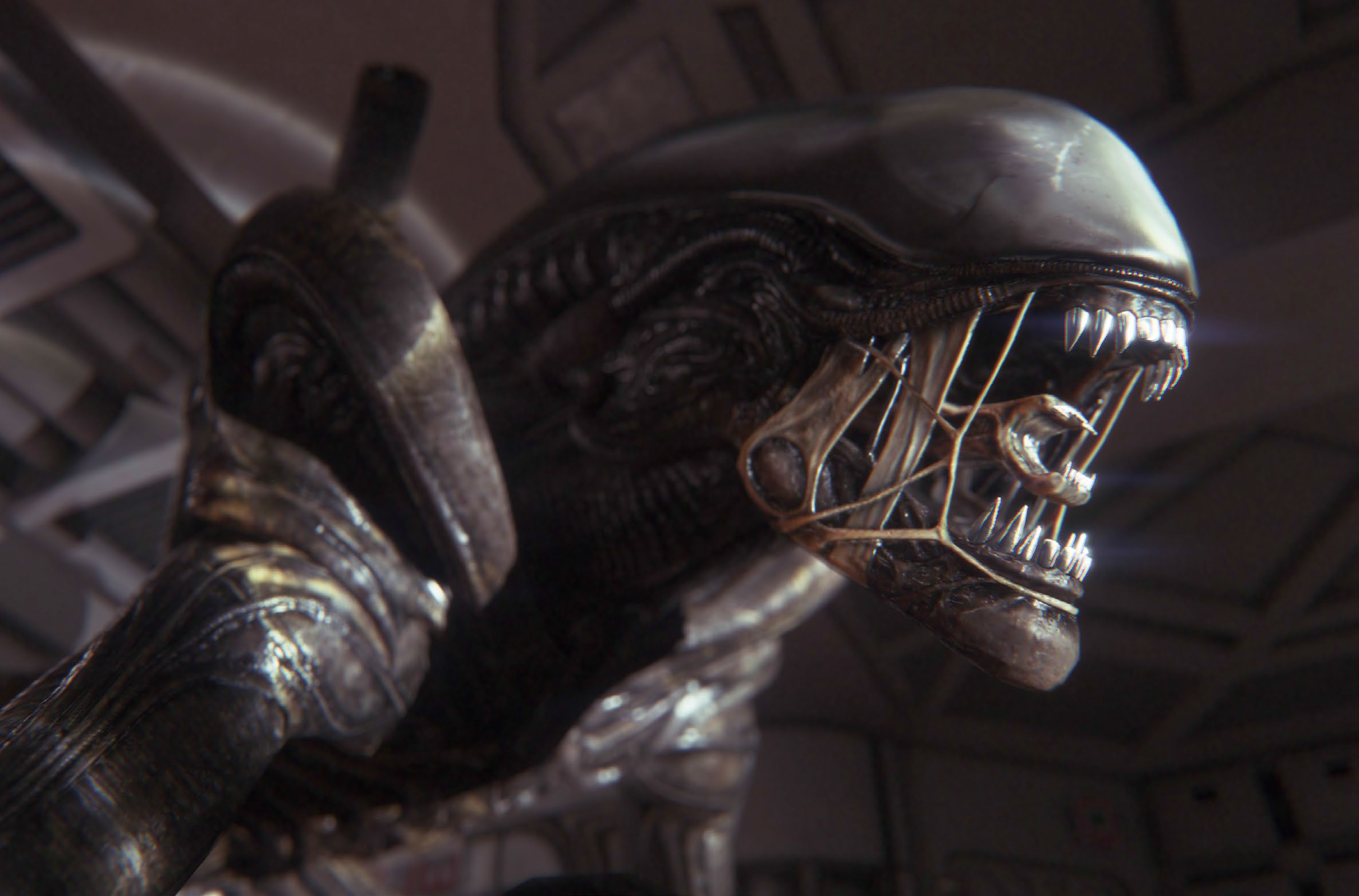 Alien Isolation’s tagline asks “How will you survive?” After playing through the demo of the game, I can confidently answer that question; I won’t.

The Creative Assembly went to great pains to create a foreboding atmosphere during the demo of Alien Isolation, which they were showing off down at EGX Rezzed in Birmingham. The entire area was cordoned off by impending walls displaying minimalistic, black and green artwork for the game.

Once you entered the rather impressive structure, you were put in a holding area as you queued up to play Alien Isolation. Here you could look at concept art, or watch the looping video on the monitors above. Done in the style of a distress beacon message, complete with 80’s VHS quality and screen flickering, the video warned us of the alien’s presence and schooled us in use of the motion tracker. As I was about to enter the game area, the man in the video gave his last piece of advice; “you can’t kill this thing, just try to stay alive”.

The demo section was very…isolated…I’ll see myself out.

Alien Isolation aims to bring the franchise back to its horror roots. There are no tactical smart missiles, phase plasma pulse rifles or RPGs here, and nary a sonic, electronic ball breaker in sight. You’d be lucky to find yourself a sharpened stick with which to defend yourself with, so taking the alien on in a straight up fight is completely out of the question. Thankfully you will have more than harsh language at your side as you tackle the alien, as The Creative Assembly have stated there will be a variety of ways to fight off or distract the creature. None of those toys were at my disposal this day sadly, so it was just me and my wits against the perfect predator.

I was taken to my booth, given my controller and headset and told to pay attention to the opening video, as I might just survive a little longer with its help. The chap at my booth gave me a helpful hint before I dived in, “don’t try to outrun it”. He sat back with a look of glee and anticipation on his face as I delved into the game.

The demo opened with me standing in a dark corridor, with lights coming on from the far end towards me, each one struggling to come to life with a thud and a flicker that resonated around the room. As you move to the end of the corridor you notice the noise, or rather the lack of it. The station is almost completely silent, until you do something to disturb its slumber. At the end of the corridor is an observation room, which creates yet more racket as the shutters open and the lights come on. When playing Alien Isolation, you’re constantly aware of every sound you make, with each bang leaving you on the edge of your seat as your mind can think only one thought, “did it hear that”? If you’ve ever been sneaking around the house late at night, trying to find a midnight snack, and you knocked something over, you’ll know the feeling I’m talking about.

It’s like playing hide and seek…except you get eaten if you lose.

Stumbling further into the ship, I came across a sealed door that I couldn’t open without a plasma cutter. “Plasma cutting a door open, that sounds like a quiet job that won’t attract a giant alien monster” was the thought that immediately came to mind, but the job needed doing so I backtracked into some other rooms to find the tool in question.

As I entered what appeared to be a kitchen/dining area, suddenly the lights began to flicker and the whole station shook like it was coming apart. Instinct took over and I darted under a table and whipped out the motion tracker. Nothing. This is where Alien Isolation impressed me the most, before the creature had even reared its ugly head. I was terrified of bangs and shadows, but I’d never even seen the beast I was so scared of running into.

The level of detail within Sevastapol Station, the setting for Alien Isolation, really is astounding.

When it did finally take its first step into the limelight, I did feel a slight moment of disappointment. Not at the creature itself, but at the fact that it arrived in a predetermined location during an in-game cut scene. This meant that all of the previous creeping and hiding I had done was for naught. This won’t affect first time players, but it could hamper the replayability of the game if this happens a lot during Alien Isolation.

I should add that disappointment quickly faded away, replaced by trouser-filling levels of dread as the creature stalked off out of sight, right in the direction I had to go in. I steeled myself and followed its path out the door, but I’d barely made it five feet when I heard an almighty crash from behind me. Once again instincts took over and I darted behind a barrier just in time to see the alien drop from a vent above the door. It set a trap…it knew I was there and it pretended to leave. I couldn’t risk peaking over the top of the barrier to look at the creature, so I took refuge in the motion tracker’s green eerie glow. Nothing at first, but then it started. That ever-so-recognisable beep, and a small dot moving closer to the centre of the screen. It was coming my way. This is when Judas the motion tracker made its move and betrayed me.

The motion tracker is not a pin-point accurate device, it merely gives you an idea of the direction and distance of the creature. At such close range, it was no use in telling me which side of the barrier the alien was going to come around, so I had to take a gamble. Then I heard it, a piercing scream from behind me. I bolted in the other direction, looking frantically for some way to break line of sight with the creature but to no avail as the alien swiped out my legs with its tail before finishing the job with lethal efficiency. Death number one.

The motion tracker’s forced perspective means you have to look at it or your surroundings, not both. Choose wisely.

I reloaded and once again left the room, only to again be greeted by the creature lurking in the vents. I made it a little further but was once again turned into alien chow. As I left the room for the third time, I was ready for him. I knew where he’d be and I knew where to go. At least that was the plan, instead I was greeted by…silence. It wasn’t here this time. It wasn’t following some script telling it where to pop out, it was using a variety of tactics to try and flush me out. There were two other exits to that room and if it had been following some script, it would have quickly become apparent which route was safe. The game would become predictable. Now a twenty minute preview is obviously not enough time to determine something like that, but it certainly seems like The Creative Assembly have put a lot of work into the game’s replayability, the creature’s first appearance notwithstanding.

The rest of the section boiled down to one of the most intense, nail-biting cat-and-mouse games I’ve had the pleasure (and terror) of being involved in. I had to escape the section of the ship, which meant finding an airlock. Upon pressing the button that I thought would lead to my escape, I was instead rewarded with the mechanical equivalent of a god-damned orchestra as the entire section went berserk; repressurising an airlock is not a quiet affair as it turns out. Pants thoroughly soiled, I darted for cover just in time to see the alien burst into the room and begin investigating the door. I waited, moving around cover to stay out of sight until the door finally opened, at which point the alien promptly went and sat inside the airlock. Bugger.

If he’s this close, it may be time to reflect on your life and what you’ve achieved.

Eventually he cleared off when he found nothing of interest and I was able to make my escape, but I was grabbed by how realistic and logical all of his movements seemed. He hears a noise, he investigates. He sees a door open, he goes to check it out. He isn’t just some sentry or obstacle for you to navigate your way past. He is hunting you, scanning the environment for clues. Dawdle too long and he will find you, and he will kill you.

So all in all, Alien Isolation is one of the most horrifying video game experiences of my life, and I can’t thank the guys at Creative Assembly enough for it. My instructor’s comments were bang on the money. Don’t run, don’t even try. If you have to run, you’re already dead; the game is just teasing you before it finishes you off. The run button is just a suicide button with a delay.

Alien Isolation has everything going for it. The look, feel and sound of Sevastopol Station are bang in line with the original alien style and the creature is utterly terrifying, from the way it looks and moves to that ear-piercing scream when it spots you. My only concern is simple, is there enough variety on offer to keep the tension and excitement up for a full game. The Creative Assembly are being tight lipped on the details, but they assure us that there are plenty of mechanics and surprises in store in the full game. We’ll have to see about that, but for now rejoice; Alien Isolation appears to be the alien game we’ve all been waiting for.

Be sure to check out our exclusive interview with Alien Isolation’s Lead Designer, Gary Napper.