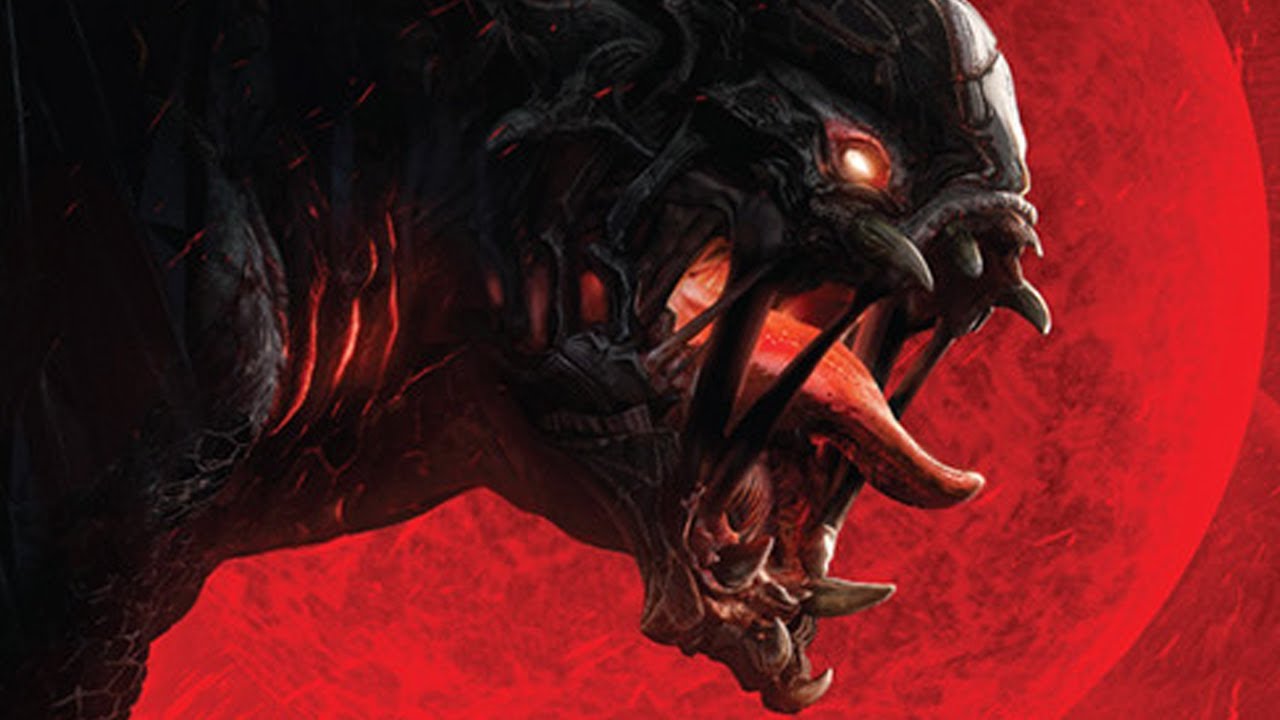 If you were down in London’s trendy Marble Arch yesterday, you’re damn lucky you made it out alive. 2K were in town and they brought the Goliath with them as they showed off their upcoming game, Evolve.

Developed by Turtle Rock Studios, the minds behind the co-operative zombie shooter Left 4 Dead, Evolve is the next evolution in co-operative, competitive, first-person, third-person shooters. Confused? Don’t worry, I’ll walk you through it. Evolve pits a team of four hunters against a fifth player who controls the monster. The hunters’ job is simple, slay the beast. The monster’s goal is to either kill all the hunters, or destroy a generator which is protecting the civilians, before chowing down on them. There are four classes of hunter, all of whom have their role to play in bringing down the monster. The monster is on its own, but it has a hell of a party piece. By eating the local wildlife, it can evolve, levelling up to a larger, more powerful version of itself.

We managed to get in a good number of games, playing as both the monster and the hunters. The first thing to note is how different those two experiences really are. It may just have been the jungle setting that our demo level had, but there was a very Predator-esque vibe from Evolve, both as the hunters and the monster. 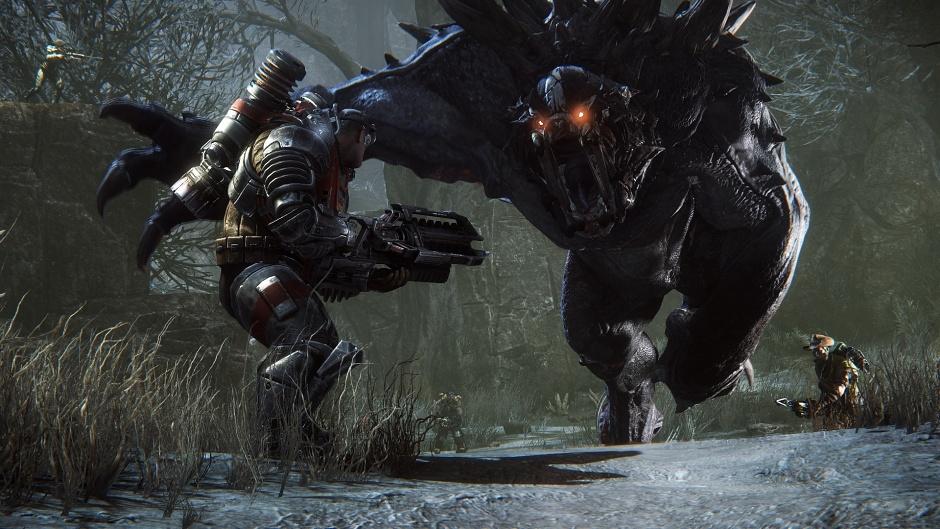 I’d move if I were you mate.

When the game starts, the monster gets a ten second head start with which to run for the hills and start eating. After this, the hunters come in via airdrop, landing in the same place the monster started. Then, the game is afoot. The earlier the hunters track down the monster, the better chance they stand of taking it down. A stage one monster is fairly weak; even an inexperienced team of hunters should be able to handle it. In these early stages your best bet as the beast is to run for the hills and find some wildlife to chow down on. Once you’ve eaten enough, you can enter a cocoon and evolve to the next stage.

Not all of the wildlife you come across will give up its tasty flesh without a fight though. Wildlife comes in three threat levels: blue is no threat, yellow is minor, red is high. Red threat level wildlife should not be tackled by low level monsters, whilst the hunters should just avoid them altogether. A good strategy I found for the monster was to stand near one of the larger, red threat level beasts and wait for the hunters to find me. Once they arrived I could leap past the beast and force them to engage it. One of the producers told me that a team of hunters earlier in the day had accidentally angered a wandering beast and been killed by it before they’d even seen the monster they were actually supposed to be hunting, so they are not to be taken lightly.

If the hunters find you before you’ve had a chance to evolve then it’s not all over for our beasty friend. The monster’s mobility is its saving grace in these early stages, as it can easily scale vertical cliff faces and perform huge, bounding leaps to escape its pursuers. You also have a keen sense of smell, which manifests in the form of a kind of radar pulse you can use to detect anything within a large radius around you. You can use this to evade the hunters in the early stages…and hunt them once you’ve levelled up.

You also have to be careful about how you move, as the hunters can follow your tracks to find where you’ve gone. You can disguise your tracks by leaping from point to point, moving through water or even scaling walls which helps you to lose your pursuers. You also have to watch out for flocks of birds which are scattered across the landscape; disturb them and the hunters will know about it. 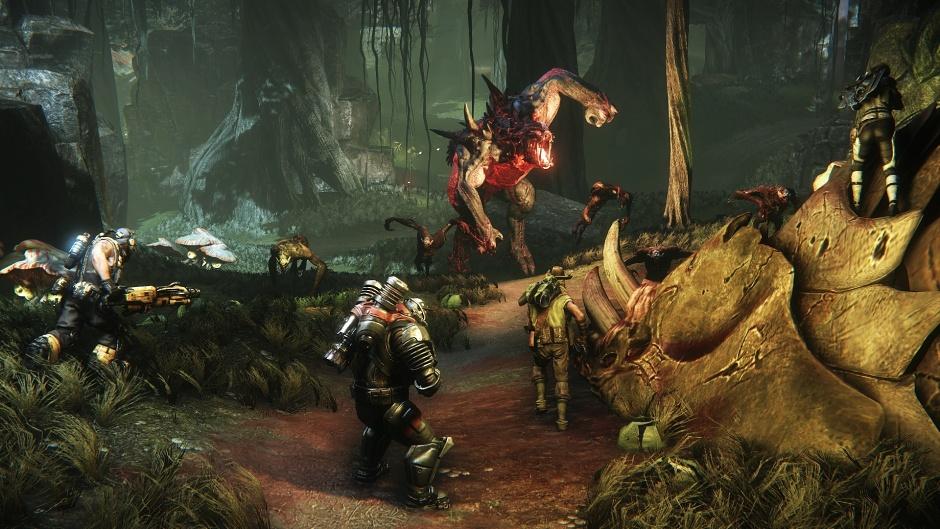 SHOOT HER!!!! Sorry, I came over all Muldoon for a minute there.

If you do make it up to stage two, then you can start to think about going on the offensive. You’re still not invulnerable, so taking on the full team head on is not a good idea yet, but if you get the chance to pick off a straggler then go for it, you could even eat them and be well on your way to evolving again. You should always be on the lookout for more food though, as eating recharges your armour, an extra health bar over the top of your static health which can’t be recovered. If your armour goes down, you should think about pulling back to regain your strength before continuing the assault.

But forget attacking at stage two, your real goal should be to reach level 3, where you become a true behemoth. At this stage, your health, armour and strength are all frankly epic. You will also be able to navigate the map much faster than the hunters, allowing you to control the game much more easily as you fight them on your own terms. You now have access to all four of your abilities to, meaning you can launch a devastating salvo of power attacks one after another, which will easily be enough to take down a hunter or two.

After a couple of games as the monster, which I won both of I might add, it was time to step into the role of hunter. My first game had me as the medic, Val. Her primary role is, as you might have guessed, to manage the health of the team. To do this she has a medic gun ala Team Fortress 2, as well as an area-of-effect type healing power which can heal everyone around her. Val is no slouch on the offensive though, as she comes with one of the team’s most useful weapons, the Tranquiliser gun, which slows down the monster and prevents it from escaping as easily. When you need to help pour on the damage, Val also has an Anti-Material Sniper rifle which creates weak points on the monster. So if you shoot it in the arm, any further hits in that area will cause extra damage for a short period of time. 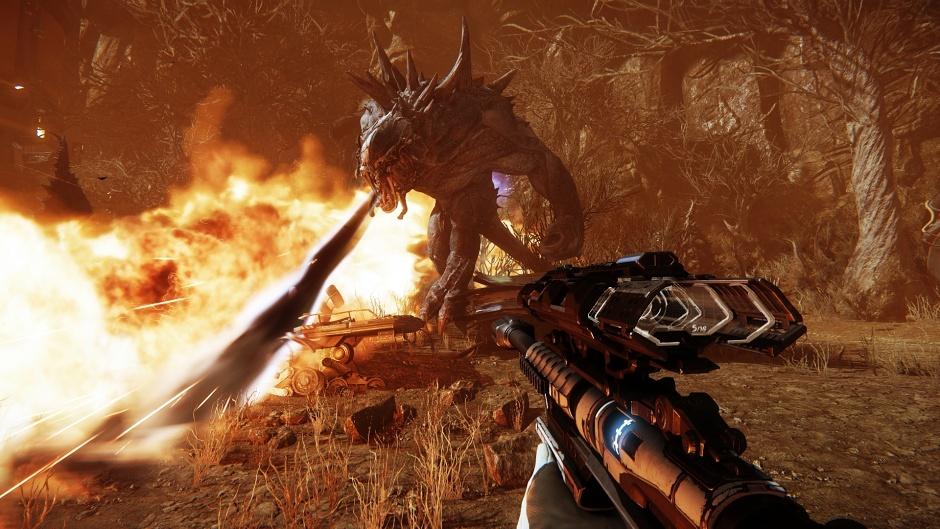 Not a comfortable range for most snipers.

Playing as the medic was fun, and pretty hair-raising at times as you will almost certainly be the monster’s primary target, meaning you have to hang back from the fight and be ready to make good your escape should it turn its attention to you. We managed to win our first game when our trapper, played by one of the 2K producers, cornered the beast early on, allowing us to take it down before it could evolve. Next I tried out the assault class, Markov.

The assault class is all about laying down firepower whilst also taking the brunt of the punishment from the beast. A long-ranged assault rifle and a lightning gun for closer encounters will typically be doing most of the team’s damage to the monster. Mines can be also be laid as a nasty surprise for the beast, whilst a personal shield can save you when things get a bit hairy.

As the assault class I found myself in constant sparring matches with the beast, as my team would slow it down long enough for me to rain lightning down on it. That usually got his attention, so a quick getaway or a timely personal shield activation were needed to save me from becoming lunch. As the assault, you should always be the closest member of the team to the beast, not only to lay the hurt down but also to cover the other players. The medic for example, is vital to the team’s survival so letting them go down really isn’t an option. This game didn’t go so well for us, as the beast managed to reach level three and destroy the generator. We had a last ditch defence of the civilians but it wasn’t enough and we were eaten fairly unceremoniously.

For my final game, I leapt into the role of the trapper, whose job it is to shepherd the monster to where the team needs it. You can do this using a harpoon gun, which tethers the monster to you, forcing it to break the tether before it can escape. You also have an SMG to help deal some damage and sensor spines which alert you if the monster moves past. The special ability of the Trapper is the mobile arena, a giant shield which covers an area of the map, preventing the monster from escaping the area. This can be devastating if you can trap the beast in and lay down serious firepower on it. 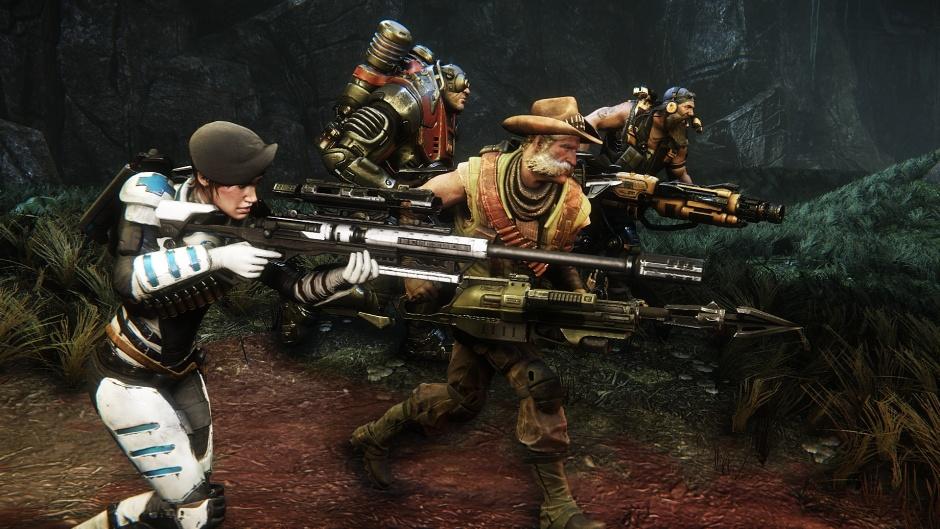 A motley crew to rival the Serenity…in facial hair at least.

I didn’t get the try out the support class so I can’t voice much of an opinion of their playstyle, but they come equipped with a shield gun which makes its target invincible for a few seconds, useful for protecting a medic or helping the assault tank the beast’s attacks a while longer. They can also call in an airstrike, which is powerful but slow and inaccurate.

Whilst each plays differently, all players have a jet pack to scale the world and evade or chase the beast, depending on how things are going. Fuel has to recharge though, meaning a prolonged chase is untenable so you have to be clever and slow him down.

Evolve is very team-orientated, as you’d expect from the creators of Left 4 Dead. Plants can eat your character, leaving you stuck waiting for a teammate to free you, much akin to being caught be a hunter or smoker in Left 4 Dead. Every team member also has to play their class. Running in spraying the SMG as the trapper isn’t helping anyone, whilst hanging back as the assault class will only get your team killed. 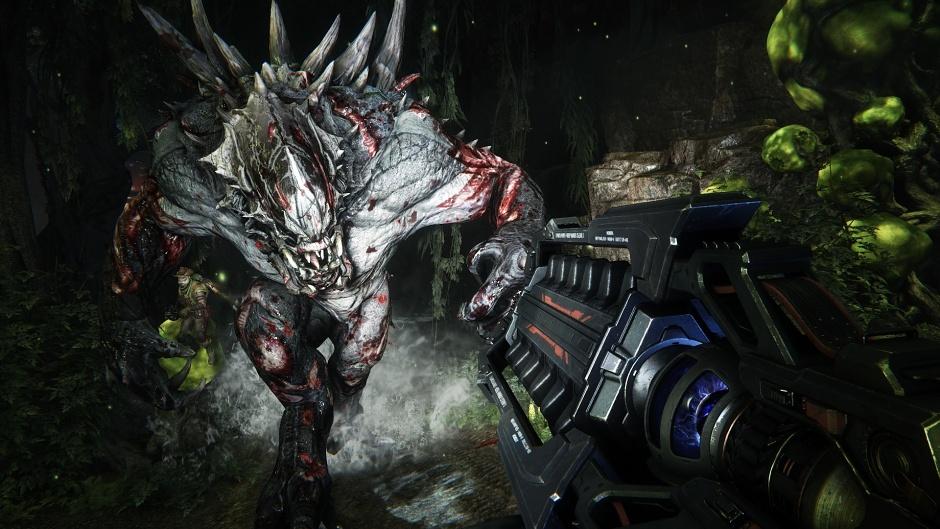 I appear to have taken a wrong turn.

During the early game, the monster is very much the one on the run and it’s a strange experience to be scared as an 8 foot fire-breathing monster. Playing as the hunters feels more like a race against time, as the longer the game goes on, the worse your chances of coming out on top are as the hunters become the hunted.

Evolve is shaping up to be a truly unique and immensely enjoyable co-operative shooter and we’ll be following it very closely as we get closer to its autumn release date. What we saw was only a glimpse of Turtle Rock’s vision with Evolve, as there will be multiple game modes, multiple hunters in each class and even multiple monster types, all of which could vastly affect the gameplay dynamic. With at least six months to go before release, there is plenty of time for Turtle Rock to polish things up.