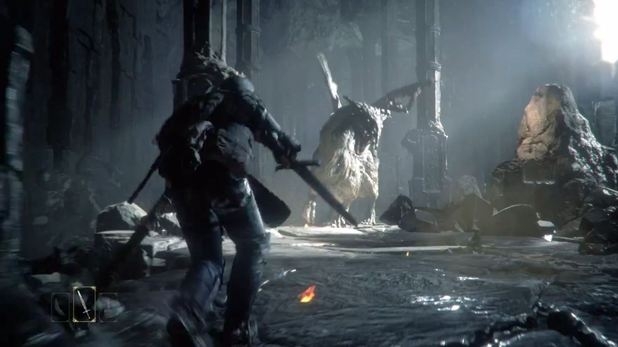 More details have been revealed on the free-to-play PlayStation 4 exclusive, Deep Down, in the latest issue of Japanese magazine Famitsu and translated by DualShockers.

Deep Down’s procedurally generated dungeons will exist in a shared world, similar to Dark Souls. Whilst exploring the dungeons, players will come across virtual corpses of real players and can loot them for equipment.

The dungeons are also built around emotions, named “Memento,” which players can use to enhance their weapons and armour. It has also been confirmed that the damage-heavy Greatswords will be available in the game.

Deep Down is set in 2094 New York with a new story blurb provided by Famitsu which can be read in full below.

The stage of the story is New York in 2094. A member of the Ravens with the ability to read the residual thoughts that dwell on items earns his livings by clarifying the story from archaeological sites of ancient cultures. At one point in an excavation in the Czech Republic some ruins from the late 15th century are found. The presence of a mysterious city and the memories of an ancient civilization can be found in the site. The hero receives the request to investigate the ruins and to read its memories.