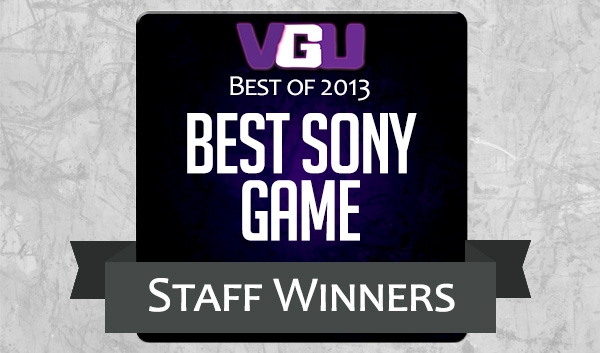 Sony has struck hard this year with some very powerful creations from their developers, and today enticing narratives and deep gameplay dominate our top 5 picks in this field. Now, with the PlayStation 4 shaping Sony’s future in 2014, it’s good for us to look back on this year and highlight some brilliant moments from the Sony 2013 catalog.

SCE Japan Studio’s Puppeteer is a side-scrolling platformer that follows the somewhat morbid tale of a boy named Kutaro who’s changed into a puppet and had his head removed. A simple premise of exploring a 2D world for various fabrics and head-like items is enhanced by the games use of a ‘live’ puppet show audience who laugh, shout, gasp and scream at events throughout the Puppeteer’s levels. Such a tale is what we have come to expect from SCE Japan Studio who time and again invest further within the enchanted world of Kutaro’s puppet nightmare.

Persona 4: Golden by Atlus can only be defined as a wonderfully crafted J-RPG which incorporates a new and exciting system to an old formula. Blurring the line between a simulation title and RPG, Persona 4 forces your character into leading two lives; one being a student and the second, a dungeon raiding legend. Party member’s Personas, manifestations of their own selves, add not only to the plot but also to combat  where the routine turn-based system is re-invented with a variety of tactics, ability types and social links crafted in the real world. The Persona series seems to always add fresh elements with each edition, here’s hoping that this trend does not stop.

Another potent RPG created by Level-5 and Studio Ghibli, the PS3 release of Ni No Kuni made a big name for itself simply off its graphical style and musical score alone. Yet the graphics and sound are only one part of a collective experience that the title sets up for you, with mass exploration being encouraged through Ni No Kuni’s villages, towns and dungeons.
The formula does not seek to reinvent such as the Persona series but instead simply creates a perfect RPG system of challenging fights, in-depth item systems and a narrative which keeps you invested throughout.  Sony has always done RPGs with style and Ni No Kuni is certainly a big aspect of their success this year.

Beyond: Two Souls always held the advantage of being something unique, which its predecessor, Heavy Rain, also benefitted from. An interactive drama, action-adventure, narrative tale, Beyond: Two Souls sees Quantic Dream lead the gamer to uncover the events of one Jodie Holmes and her connection with a being known as Aiden. With Jodie’s life very much in your hands, Beyond: Two Souls certainly drains on the emotions and puts you through the wringer as every choice you make forever changes Jodie’s fate.

I suppose it isn’t really much of a surprise, but what can we say? The Last of Us sees Naughty Dog bringing together both a chilling tale with tense and thrilling gun fights, and a rather impressive multiplayer. Viewed as one of the best written stories this year, we see Joel and Ellie attempt to survive through a post-apocalyptic United States where the desire to find a cure leads both characters through the vast world, dealing with horrifying mutants and human threats along the way. The narrative is backed up with a solid 3rd person shooter design that allows for some impressive sneak attempts and all out gun brawls.

All in all Sony has done some good work story-wise this year, with some mighty fine RPGs and unique tales leading the charge for game design. Do you think that Sony’s latest works on the PlayStation 4 will go the same way?Let us know what you think in the comments below.

Be sure to let us know what you think is your personal favorite in the poll below!