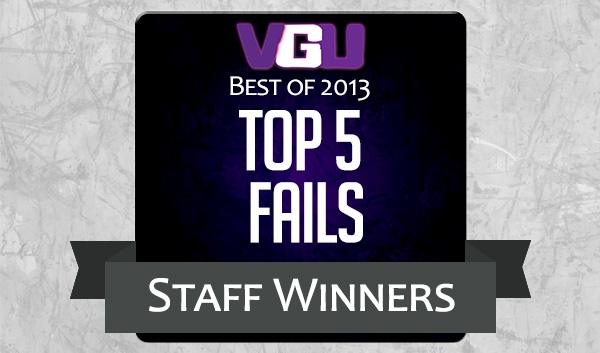 It’s been a strange year for gaming. The PS4 turned up and was hailed as the messiah by many, whilst its competitor the Xbox One got off to a much rockier start. But now both consoles are out and we’re pleased to report they are both doing swimmingly. Sadly though, not everything has gone smoothly this past 12 months, so we’re here to chronicle the top 5 biggest fails of the year, starting with…

When a game’s developer has to come out and apologise over the state of their game at launch, you know things have gone pear shaped. Rome 2 Total War’s launch issues were numerous and commonplace, affecting a large percentage of the title’s community. The Creative Assembly did indeed apologise, saying that “If you are having a problem, it is totally unacceptable and a big deal for us, please know that we are spending all our dev effort on fixing outstanding issues.” However for some people this wasn’t enough, with the game taking weeks upon weeks of constant patching. Combine this with gameplay changes that some reviewers called a step backwards for the franchise and we have our number 5 spot on the list.

Now we move on to a more recent fail, one that should be fresh in your minds. Of course it’s VGX, the three hour long gaming extravaganza with enough content to fill maybe an hour. Let’s get the elephant out of the room first by saying that Joel McHale was not a great choice of co-host for Geoff Keighley, regardless of how funny you thought he was. The problem lies in the fact that he’s obviously not a gamer which meant he didn’t have any investment in the show. His jokes were funny sure, but they were pretty generic and nothing to do with gaming or gaming culture.

But no, Joel wasn’t the reason that VGX made our list. The fact is VGX built itself up as some kind of mega event that gamers couldn’t miss, with more exclusive reveals than you could shake a Wii mote at. Then what did we get? Cranky Kong, a few Titanfall mechs and No Man’s Sky. Ok scratch that, that last one is amazing and quite frankly if it weren’t for No Man’s Sky, VGX would be way higher up this list.

You know what the kids love these days? DRM of course. DRM laced with not so subtle hints of always online connections. Sounds like the Xbox One but that made it further up our list. No we’re talking about Sim City 2013. Initially met with positive reviews, these scores were pretty much all retroactively dropped down after Sim City’s always online began to cause wide-scale issues for both users and reviewers. Many players couldn’t connect to the EA online servers which wouldn’t be such a huge issue but for the fact that a connection was required to play the game…even a single player game. Sigh. EA’s response? Disable some gameplay features whilst claiming the single player online couldn’t be fixed, only to flip on it and say they were looking into it later. Face, meet palm.

We can forgive, but we must never forget. Back on October 1st, GTA Online launched and the internet damn near exploded. With GTA V being the fastest selling entertainment product ever, it was a safe bet that the multiplayer servers were going to be jam packed when the online was finally turned on. Sadly Rockstar didn’t seem ready for this eventuality and as such the first two weeks of the game were damn near unplayable for many with wide scale connection issues plaguing players looking to get their GTA on.

Even if you could get into a server, chances are you’d be kicked at some random point, or be unable to actually do any missions. Oh also plenty of players had their characters erased out of the blue. Rockstar worked night and day to get the issues fixed and eventually GTA Online became the barrel of homicidal laughs it is today, but we still remember the dark days. There have also been some questionable changes to GTA Online since the bugs died down, including the massive pay-out reductions to pretty much all missions which make actually earning money a huge grind unless you just do races. If you’re going to make it a grind fine, GTA Online is basically an MMO so it’s to be expected. But the problem is only the missions are a grind, the races are a pretty sweet way to make cash and level up fast. Oh and no matter how hard you try Rockstar, we’re not buying into your microtransactions.

Seriously, just watch the video. Sports, TV, TV, Sports, Sports. Yes the TV features of Xbox One are kinda cool, but they should not be the major focus of your entire presentation. We’re gamers and we wanted games. Sure they showed a few things off, but it wasn’t until E3 that we really saw what kind of games we would actually get to play on our games console. By then the damage had been done and Xbox One was the Xbone, the TV box.

Combine this with Don Mattrick, the worst PR guy in world history and some frankly bewildering choices about the device itself and we were painted a pretty bleak picture. Offering optional DRM for publishers, allowing them to charge money in order to play used games as well as making the console require an internet connection once every 24 hours was frankly ridiculous. These are not consumer friendly policies and these decisions have really put Microsoft on the back foot this generation. Xbox go home, you’re drunk.

What did you think of our list? Did we miss anything? Let us know what you think in the comments below or answer the poll below.