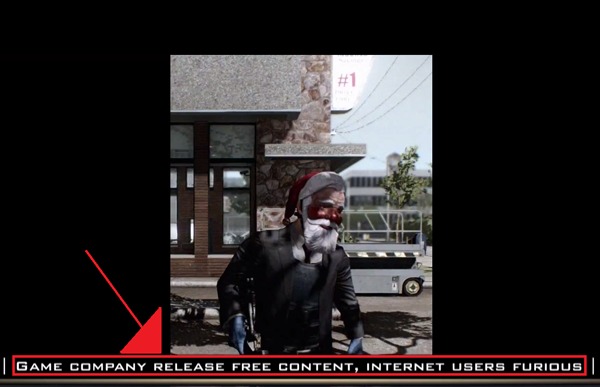 Gamers love to criticize. It is part of our culture. Anyone can do it, it is amazingly simple, that is unless you want to do it well. As far as criticism goes, gaming has a particular amount of venom in it. Forum posts, new stories, opinion articles and reviews are full of comments on what developers are doing wrong, and why that one thing you dislike is killing the industry,

Is this detrimental? Not at all. While a great deal of cynicism is leveled at the industry, intelligent criticism is a great thing. It pushes us forward and makes us better. Developers learn from their mistakes, we get better games, everybody wins. What constitutes “intelligent criticism” however is always up for debate.

One community that has a great deal of fire is the Payday 2 fanbase. Released this year from Overkill Studios, Payday 2 lets you become that great bank robber you have always wanted to be. The original Payday: The Heist had a fairly healthy community that had a good relationship with the developer. Things began to go south however when players banded together to figure out the secret Alternate Reality Game (ARG) hints that unlocked the hidden First World Bank vault, a feat that took a fair amount of talent and time. To open it, players had to perform an insane amount of incredibly hard trials. The reward was a huge amount of gold, which could catapult player levels extraordinarily quickly.

Surprisingly the anger that came from this discovery was monumental. Not only were players annoyed at how hard the ARG was, as if they had no concept of how an ARG works, but that the requirements were balls-to-the-walls hardcore. It split the community in half, between those who liked the ARG, and those who despised it. Since then things have only gone on to become worse.

After the first opening of the secret vault, Overkill were asked by fans to lower the threshold of entry to get into the secret area. In retrospect this was widely considered a bad move. Not because people wanted to see the games big secret, but because it lowered the bar for entry and destroyed the games difficulty curve. Any player could now get into the secret vault with very little effort. This led to players farming the mission to leap through the leveling system at 15 levels a pop. This comes at the price of having a lot of new players not having the skills to back up their high levels. The community noticed this issue, and a second backlash occurred, crying that the game had been ruined by these players.

Since then the fandom of Payday has grown more demanding. The earliest example of this was during development for Payday 2, with the replacement Hoxton’s voice actor from Pete Gold to Derek Ray. Fans created a petition asking for Gold’s return, to which Overkill stated that the cost to hire Gold would increase the cost of the game. Overkill made the right move, refusing to pass the cost into the consumer for one characters voice. Did fans accept this? Nope. A portion began to harass Gold, demanding he reduce his fee. Not cool.

Current state of “old Hoxton”petition: Every single one who signed it needs to pay ~$60 in order to cover the minimum VO recording cost.

It would be folly to refer to the community was one amorphous blob that constantly spews hate filled bile. There are many people, including quite a few of us here at VGU, who enjoy Payday 2 and love how Overkill have continued to develop it. The problem is that Overkill are caught in the middle of many unappeasable camps of fans.

After every Steam update over half the comments are a demand of some sort. It is a constant loop where many ask for DLC, Overkill give them DLC , then they moan that they haven’t fixed bugs. They fix something and the comments are about wanting more DLC. Damned if you do, damned if you don’t. This has reached the point where Overkill joked about it in the trailer for the free Christmas DLC.

Some People Just Want To Watch The World Pay….Day

That is just how gamers are thought right? Well, I don’t agree to the attitude of being demanding because you feel you deserve things, that’s called being entitled. It is fine to be unhappy and have a grievance, but you don’t have to be obnoxious to get that point across. Overkill are between their love for making games and a mostly unpleasant fan-base that seem unhappy about everything they create.

The game isn’t perfect, no game is. Some people have some genuine problems and are raising them the right way, through polite, well-reasoned discussion and comments. The problem is that this seems to be in the minority. Payday 2 is a blast with friends, and the DLC is adding to that. The recent Armored Transport missions has a nice level of variety that easily makes the price worth it. Overkill are doing a bang-up job supporting their game and don’t seem to be showing any signs of slowing down.

I’m not going to lie, I love the game. The thrill of pulling off a heist against the odds, of bringing things back from the brink is great. The temptation of one more score is there. As far as I’m aware you can’t find that anywhere else, and Overkill have made an excellent game. I just wish that certain parts of the community would make a bit more intelligent criticism, and a little less angry complaining. Seriously, how can anyone be annoyed at a studio that releases this as their Christmas song to its fans?

What do you think? Do these sound like reasonable suggestions, or is it all way off base? Let us know in the comments.